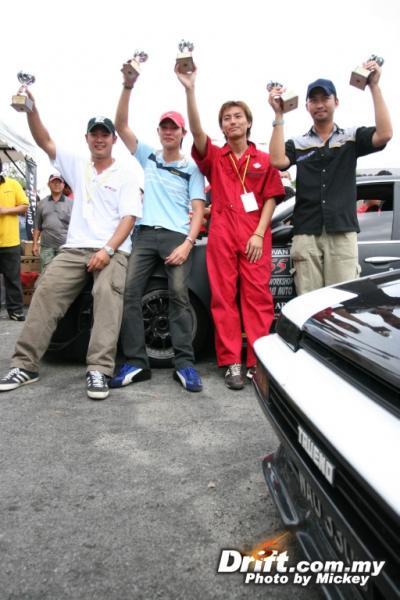 The ‘race what you brung’  drag racing session , popularized by the former Batu Tiga circuit’s, hugely popular ‘Saturday Night Fever’, had a huge impact in the motorsport scene but sadly not all was positive. 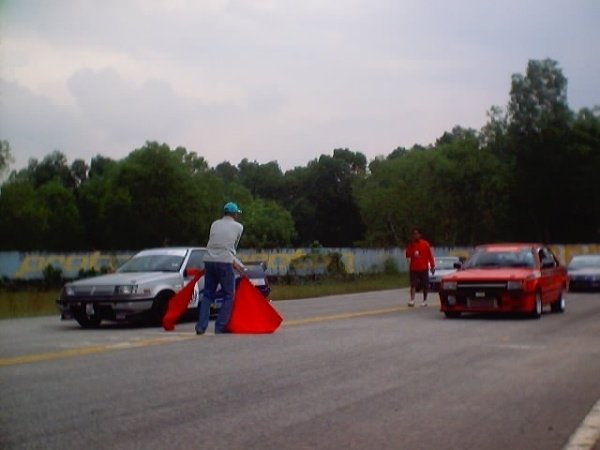 Cars of various state and form, many of which were souped up daily driven cars  were drawn to this loosely formatted racing. A small entrance fee and a helmet would qualify one to participate . With safety being was more of a mutual understanding rather than enforced, only serve to solidify its portrayal of being an underground sport . 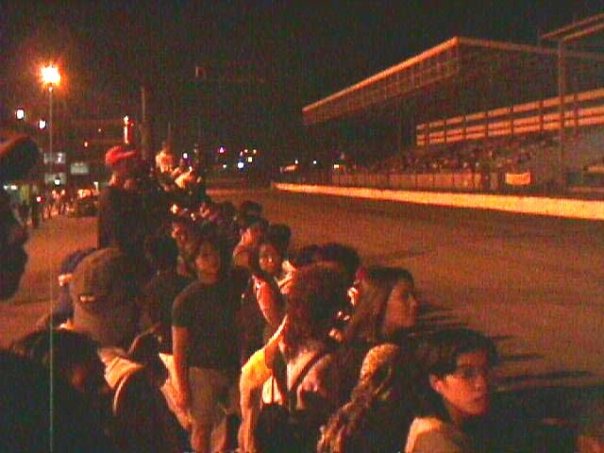 Though these sessions did a great job of pulling the street  racers off the streets, it  had only manage to   produce a handful of serious competitors as the drag racing session only served to be a side show for the circuit racing sessions (CCT) which was held on the same night 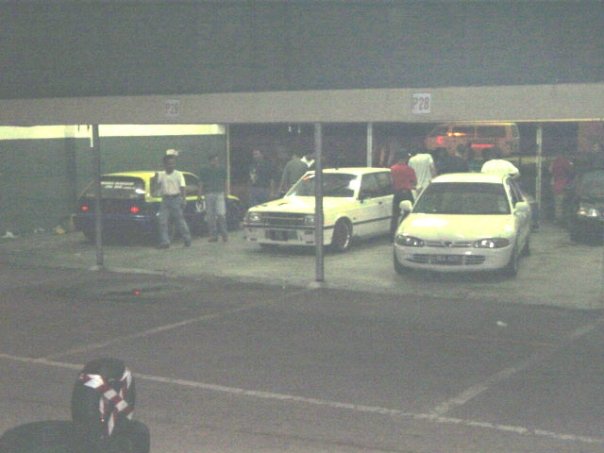 As years went by, with the construction of the FIA approved ,Sepang Internation Circuit, a new drag racing series was born.    With  sanctioning by motorsport governing bodies ,proper formatted races with strict safety measures and proper timing devices, Sepang Drag Battle series, besides having set the standards of quarte mile racing in Malaysia ,but have also helped to improve the image of drag  racing and most importantly , improve the mindset of those involved in the sport.The  ‘seriousness’  of this sport  have produce more  purpose built drag cars which are more faster , more reliable and most importantly, safer. These cars  now dominate the numbers of cars participating  and we are begining to see  the quarter mile   times   dropping  to the single digit region of  current record of  8.94 secs held by GT Auto’s Evo 3 !Though  the timing may not even  raise an eye brow in the international drag scene, an 8 sec run achieved on an untreated ,circuit type surface ,with minimal ( at  most) burn out time, is certainly no easy feat. To put it in simpler  terms ,traction is something that Malaysian drag races are struggling with ,as these races are being held on a surface not meant for this genre of racing.The main straits of the Sepang International Circuit , where the drag race is being held  may be  perfect for circuit , but do not produce enough grip   for Drag racing.In essences, going any faster than 8 sec might not be possible and may not be very safe either. This is one of the reason why, with the exception  of the odd semi tube chassis cars, the presence of  high horsepower Dragsters ,which are regarded as the  machinery of the highest form of drag racing,  have illuded the Malaysian drag scene . A proper drag strip with treated surface  and sufficient burnout, staging , race and braking space is needed to  accommodate these extremely fast high horsepower cars to be to  compete safely. Certainly a chicken and egg situation has   existed as one would ask; why do we need a proper drag strip when the cars currently competing now do not necessarily need them and there aren’t any Dragsters in Malaysia  ? Goodyear,  with  its rich heritage in racing comes in ; inline with its dedication to raise the level of motorsport in this region , Goodyear has taken the initiative to show case  its  3000bhp Dragster, from our neighboring country  , Thailand  and also to introduce Goodyear’s  line up of drag tires soon being made available  in Malaysia. 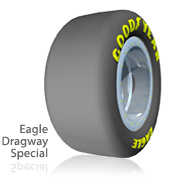 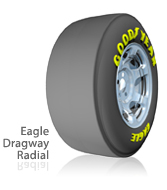 A demo run was scheduled during the Sepang Drag Battle that will serve to entertain,  educate and most importantly  inspire the drag racing enthusiast and also venue owners  into venturing into this higher form of drag racing. 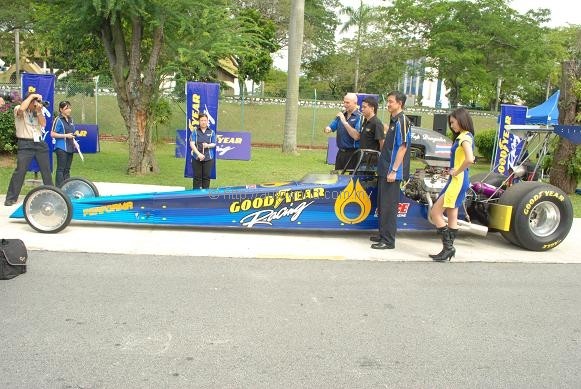 The media launch was  held at Goodyear Malaysia Berhad headquarters in Shah Alam. 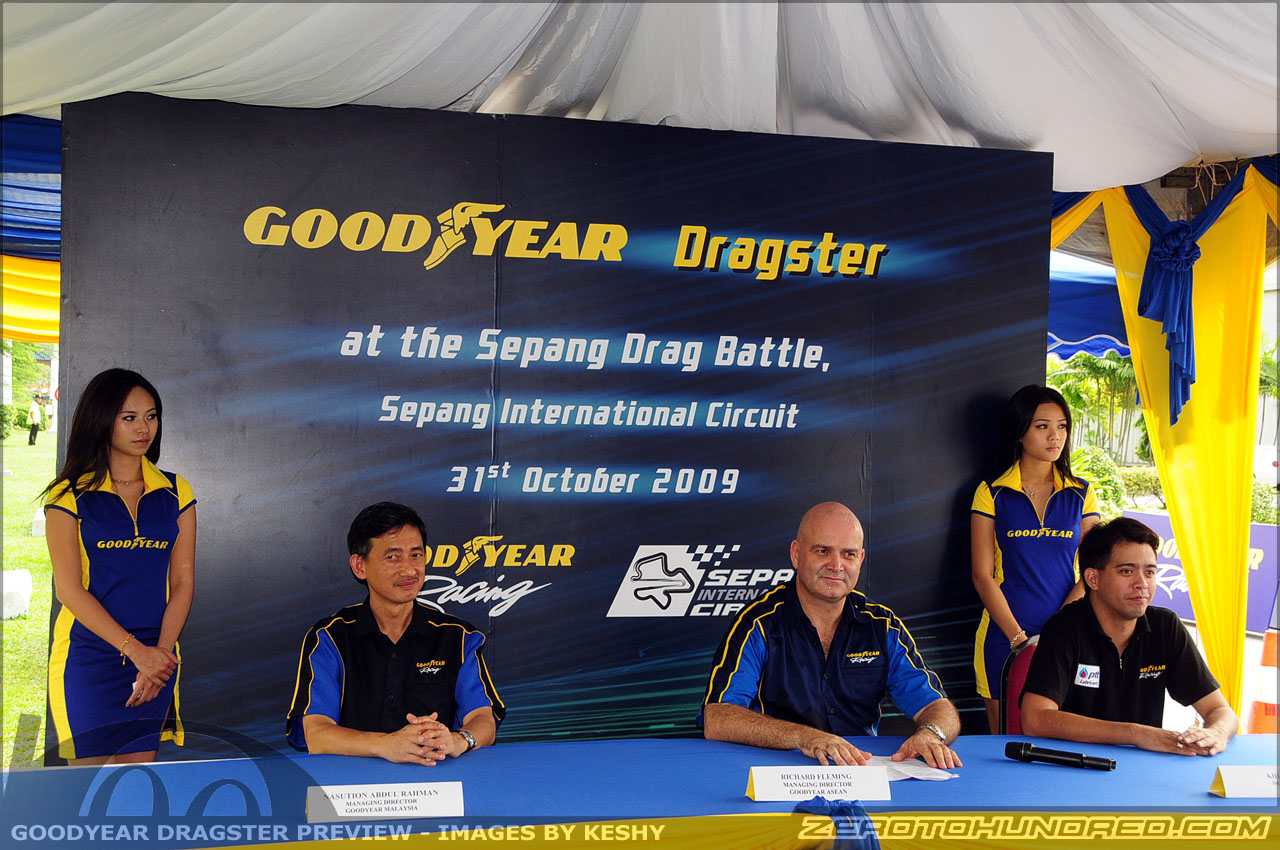 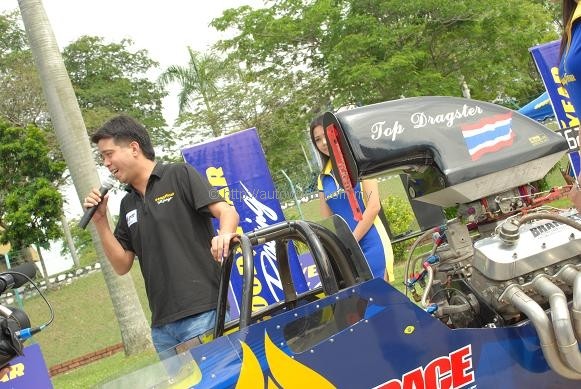 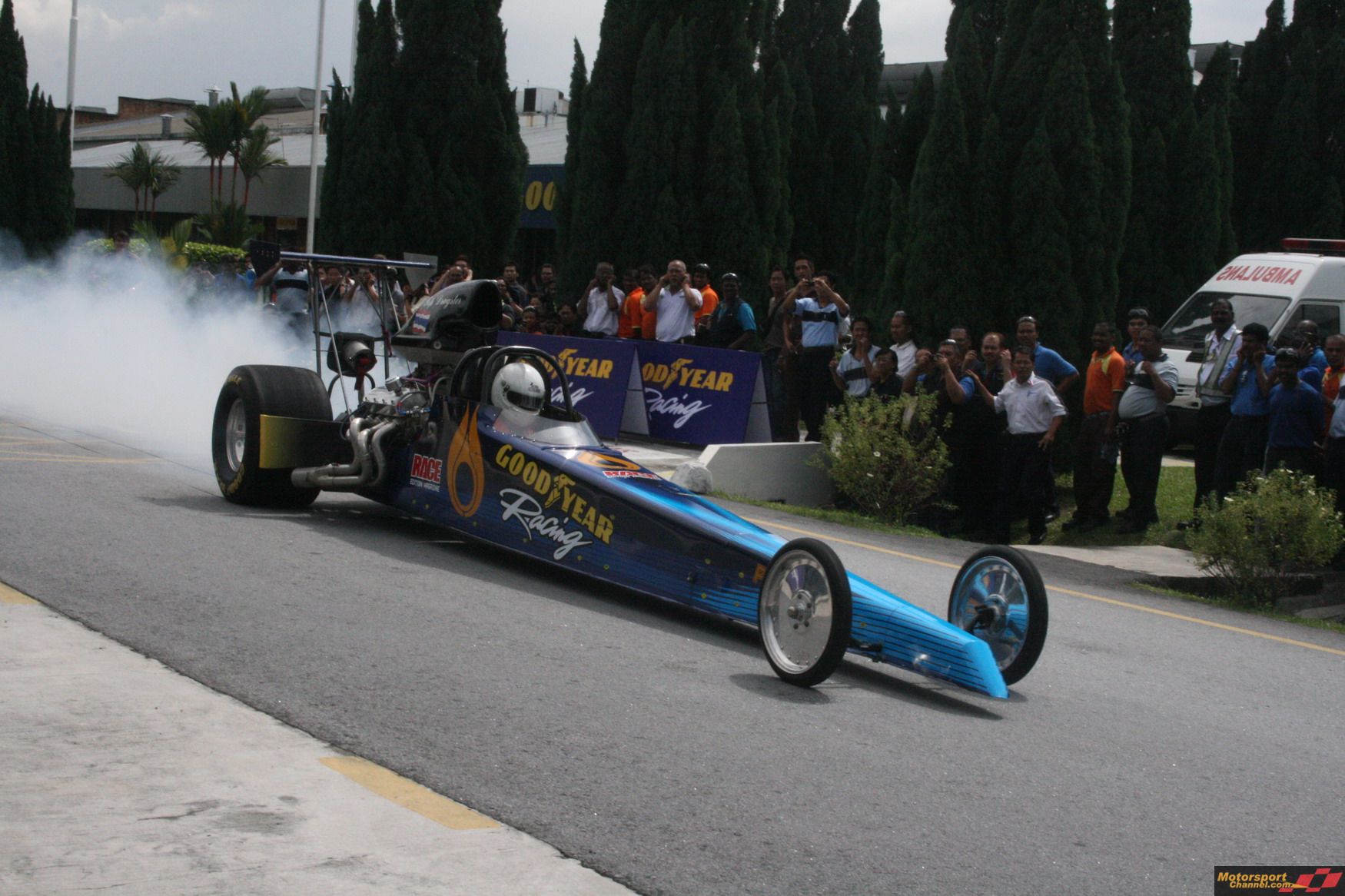 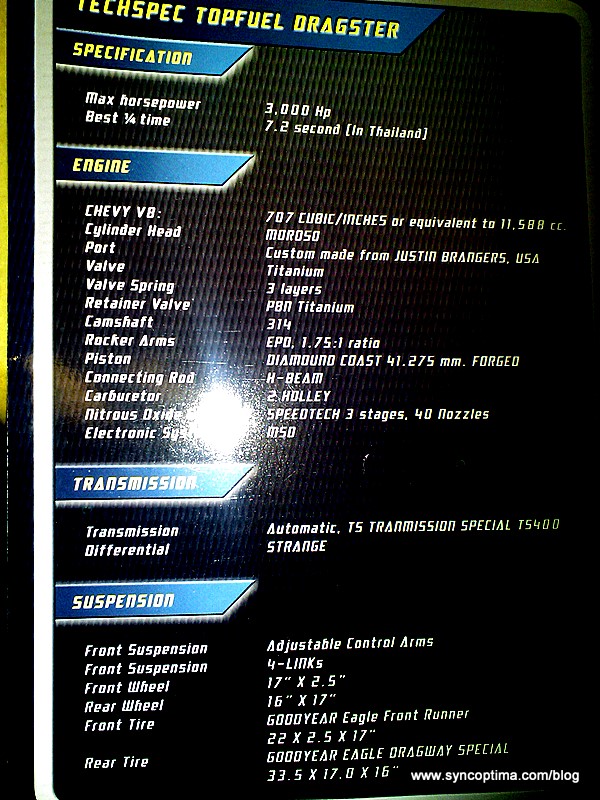 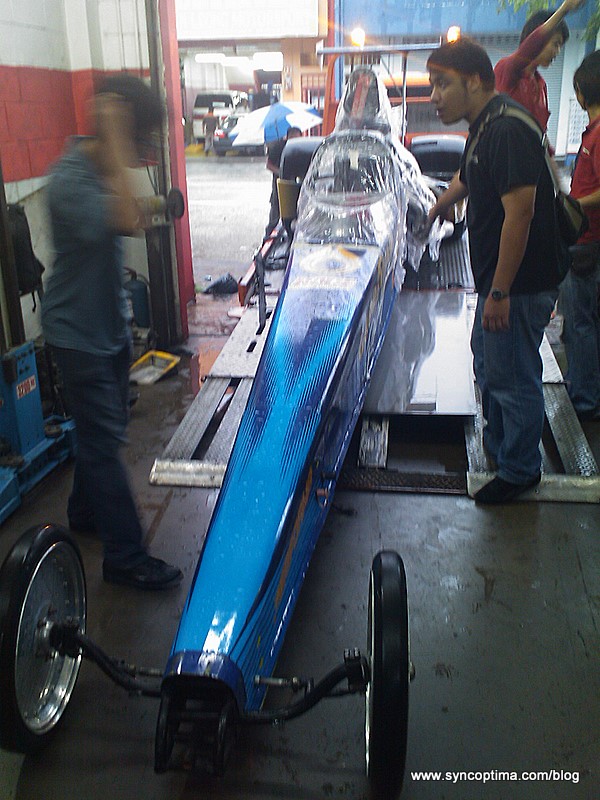 The  Dragster had broken one of the tubes on it chassis when the car accidentally  ran over a speed hump  when it performed a burnout during the launch. A broken tube on it chassis , besides affecting  the integrity of the Dragster’s structure also will cause the car not to steer straight. 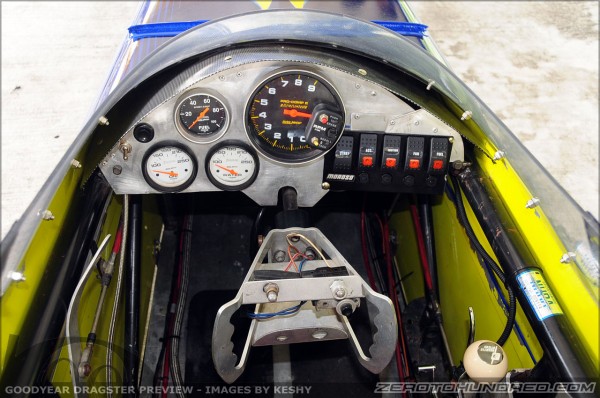 If one were to observe a Dragster’s steering wheel, it serves more as a handle for the driver to hold onto rather than to actually steer the car. What more with its skinny front tires, steering inputs are at minimal at the most  during a run . So welding the tubes of the broken chassis is not such a straight forward affair as the tubes have to be joined at a precise angle in order for the car to run straight. To achieve this , the Dragsters has to be corner weighted to a certain  ratio  which takes account chassis , tire and other components  flex ,along with other mambo jambos  that only the  chassis tuner knows about.Thankfully after making a few phone calls, GT Auto were kind enough to lend us their space and facility which includes a set of corner weight machine 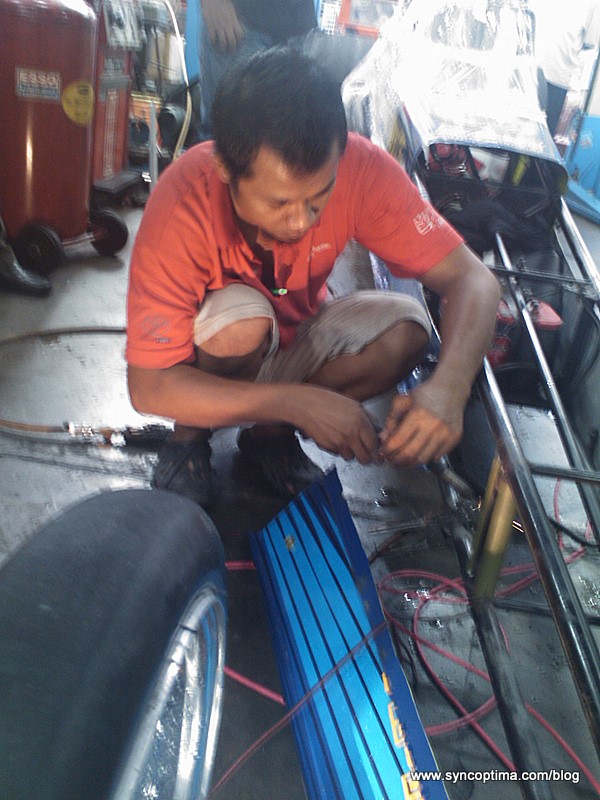 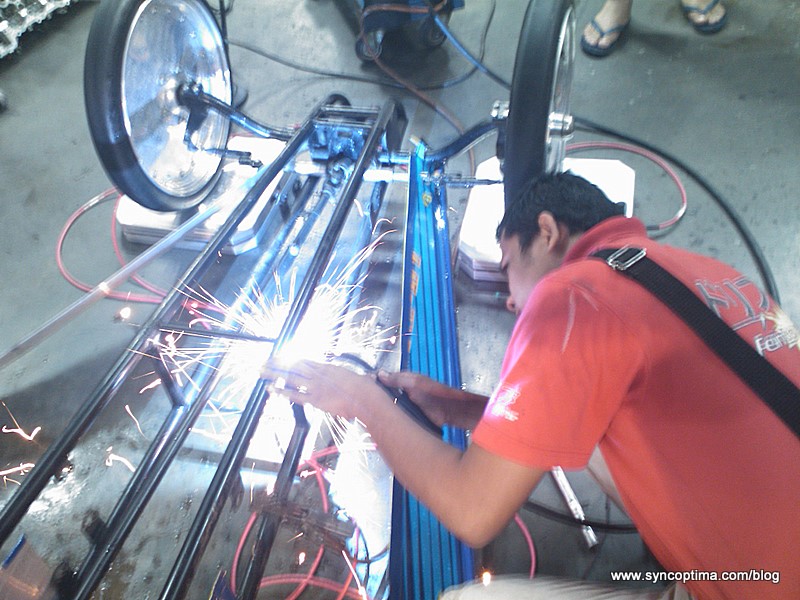 As for the welding work, we were able to get Wan Boss ( a renown drifter )who is a welder by profession with  exceptional skills ! Wan  was kind enough to drop everything he was doing to make it over to get the job done. 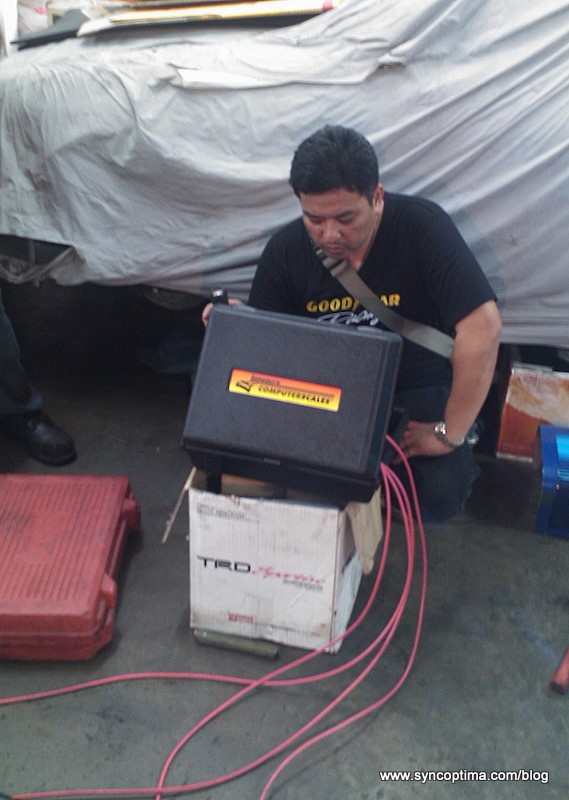 The chassis engineer closely guarding the corner weight figures away from others.. 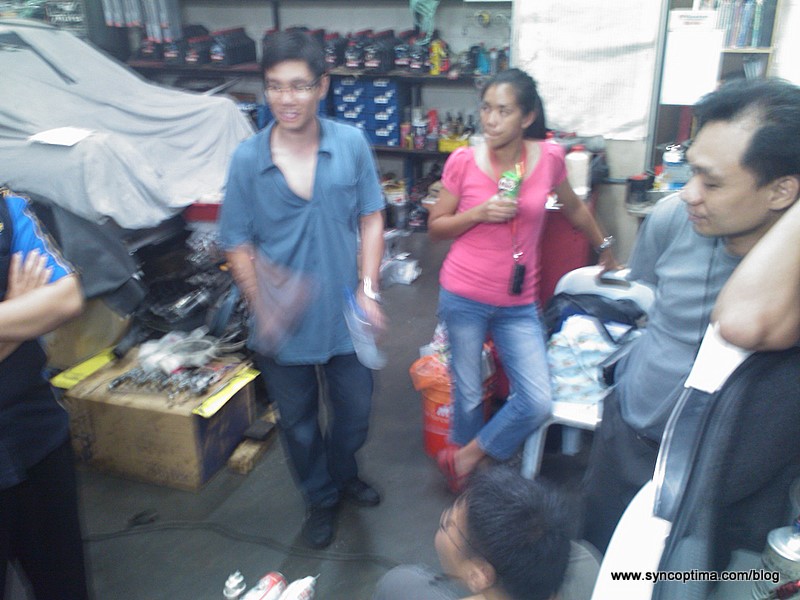 Hanging out with Toby (far right) from GT Auto 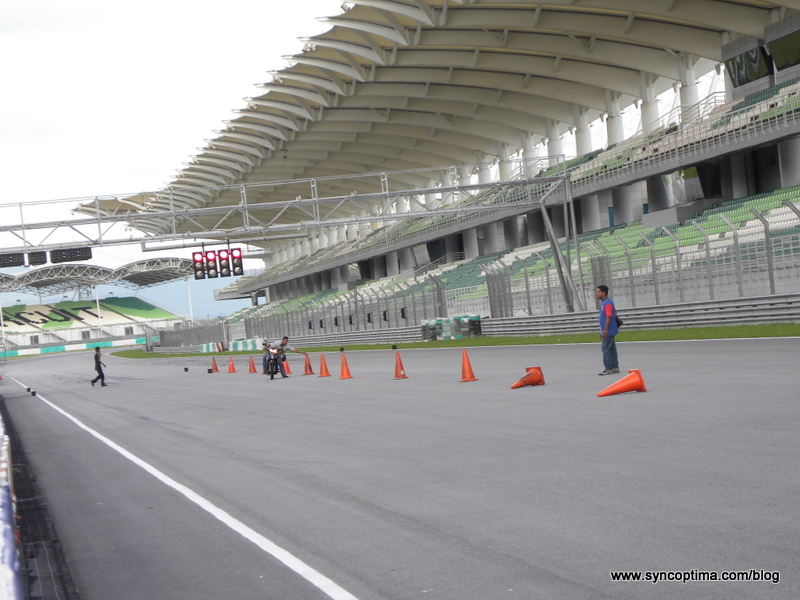 We got to Sepang early that day , in time to see the drag course being set up!! 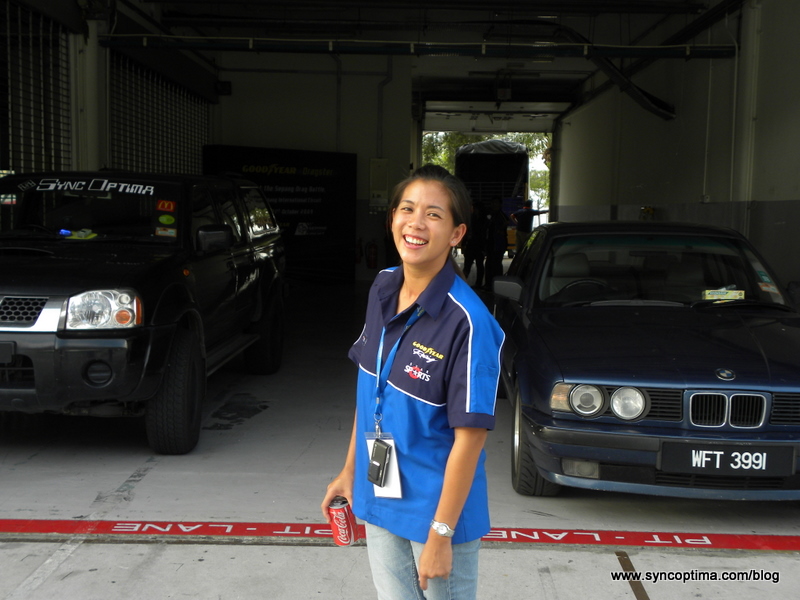 Jane doubled as Goodyear’s race queen earlier during the day.. 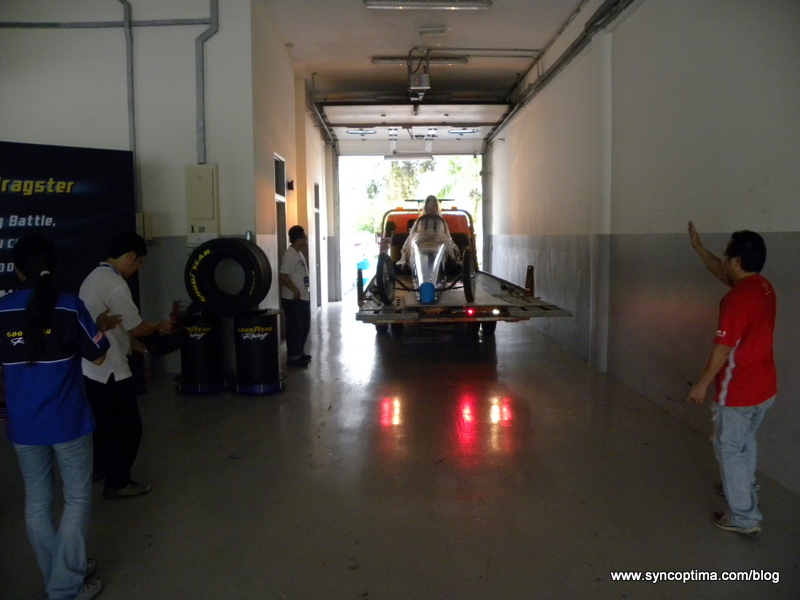 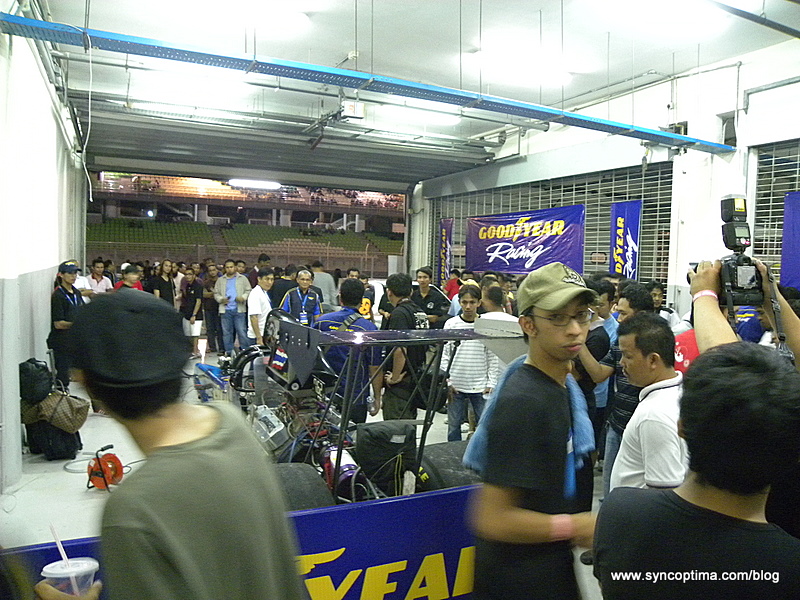 The Dragster generated huge interest among the spectator , whom many have never seen a real Dragster in the flesh!!! 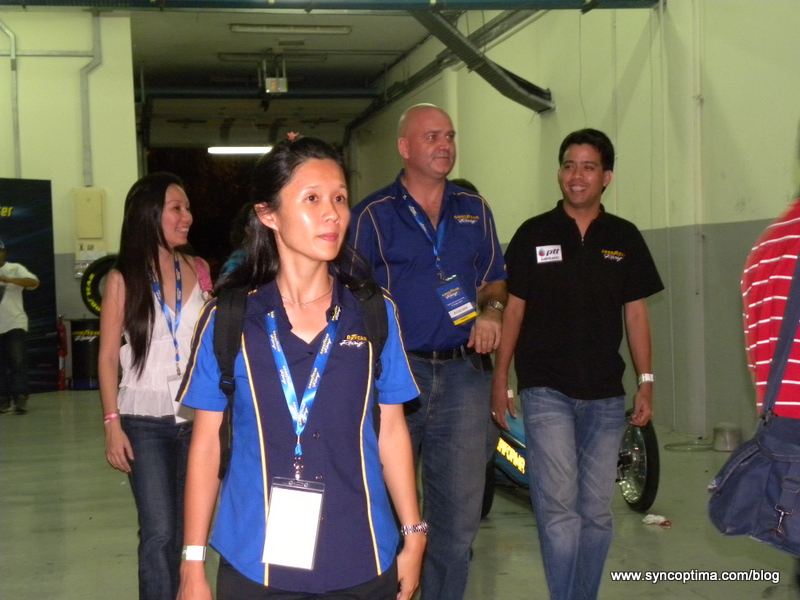 Richard Fleming  and  Apaspong about to inspect the track 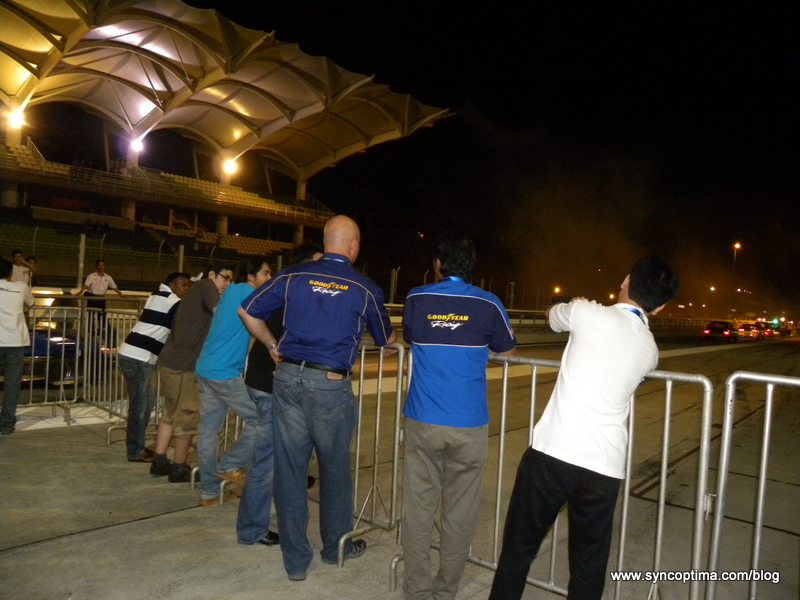 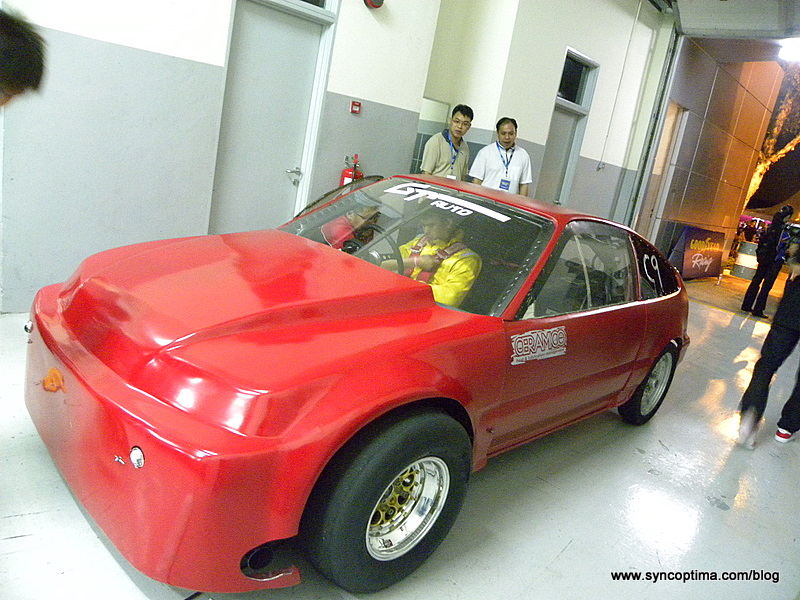 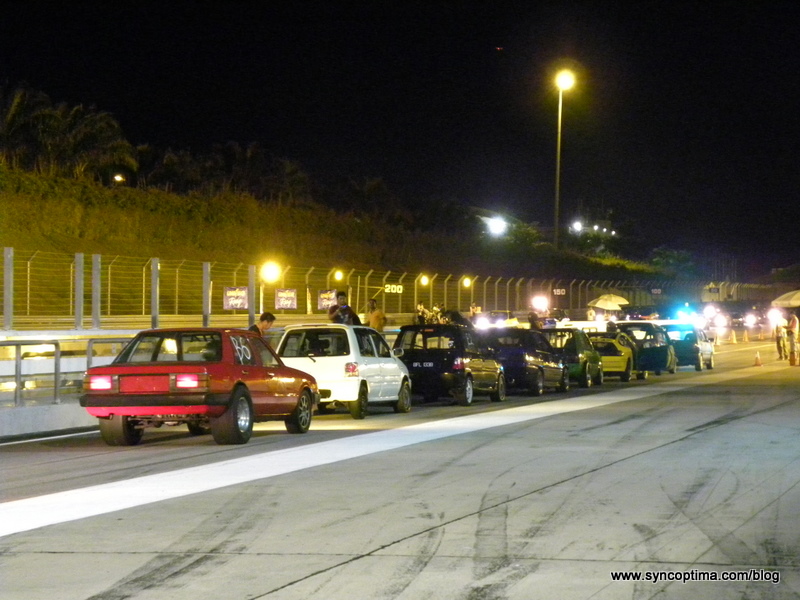 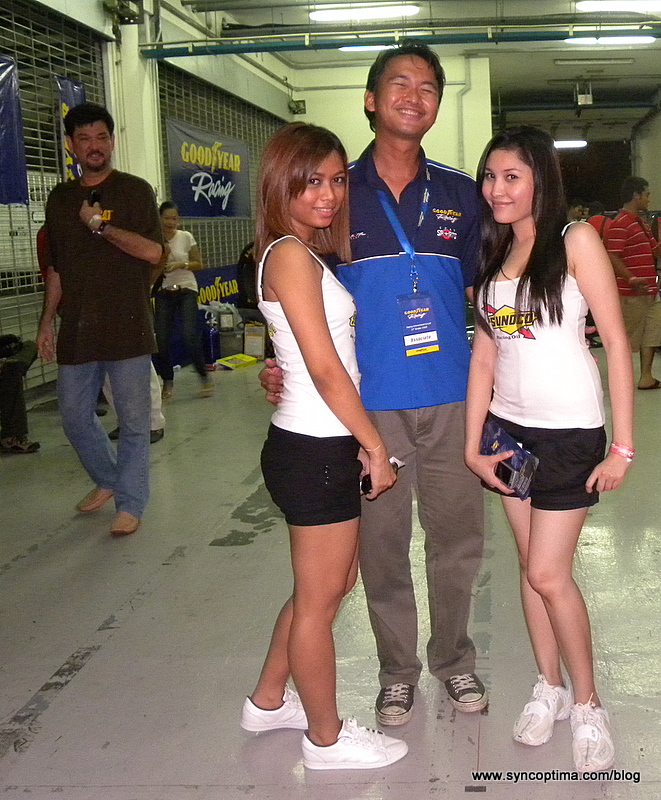 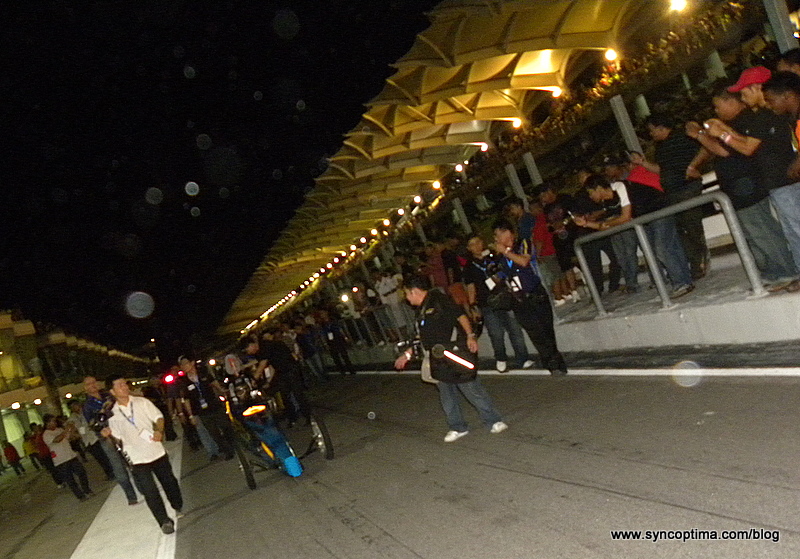 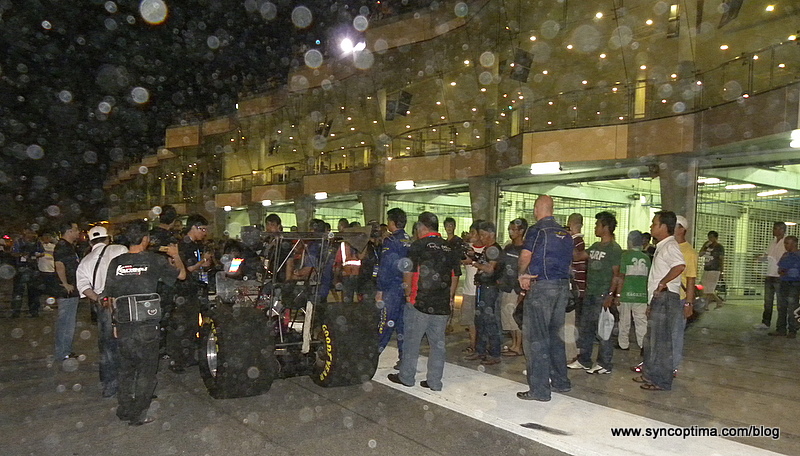 Without a proper burn out , hence racing with tires below the correct operating tempreture, the Goodyear Dragster driven by Apaspong Premanon only managed a 10.4 sec. An average time in Malaysian Drag standards but bear in mind, this 400m time was achieved with the car lifting  off throttle at the 200 meter mark, as the Dragster’s begin to go squirrely   thus forcing the driver to coast  to the finishing line from there on!!!One could only imagine what timing could the dragster achieve if it had a good burnout and a slightly stickier surface to race on!

With Malaysian now having witness the demo run of this awesome machinary courtesy of Goodyear, it is now up to us to make a collective effort towards the construction of a proper drag strip in order for this sport to grow further .