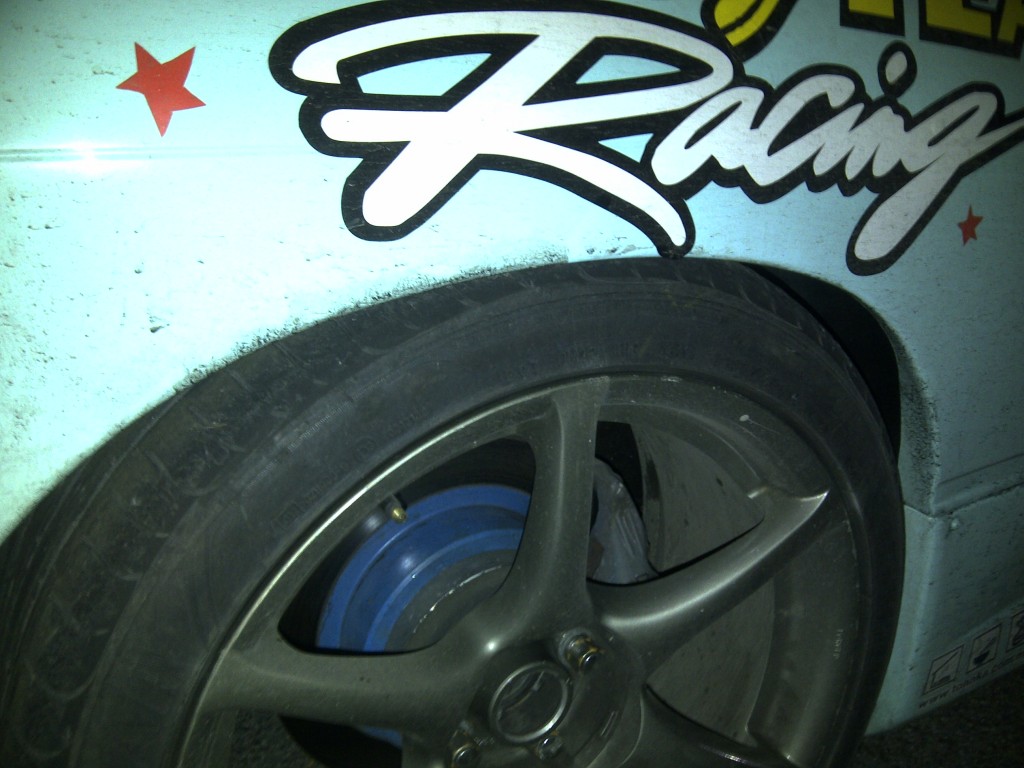 Anyways..J4M8u had its rear wheel rubbing against the fender, causing the car to spin whenever I pitch the car beyond a certain angle..Hellaflush can be HellaDumb at times!!

Jane improved by leaps and bound with her drifting. She has plans for her  Blackie to undergo some upgrades soon!! So both of our missles will have some work done to them ! 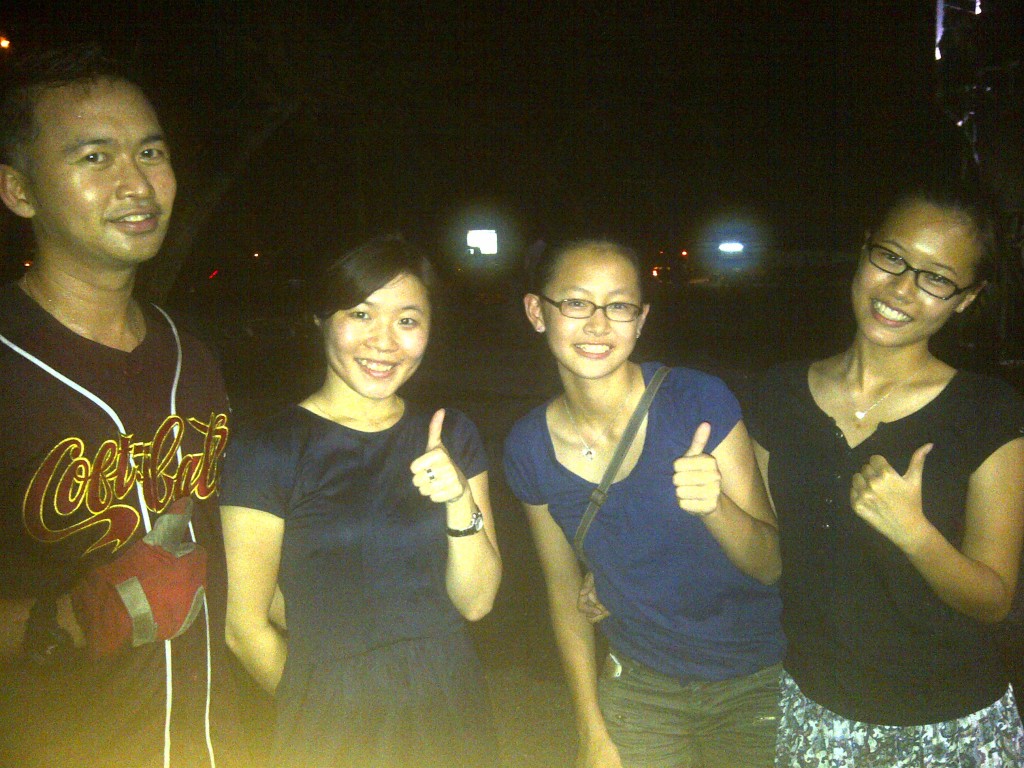 By the way “We Love Taiwan too ”

After missing out on the 1st round of the Federal’s Open Drift Challenge, Jane and I made it a point to make sure to not miss this round.

I made a couple of changes on the SLOW s13 since its last outing at ACE Drift Challenge and was eager to test it  the new Goodyear Eagle F1 Asymetric 2 just recently launched in Malaysia!! 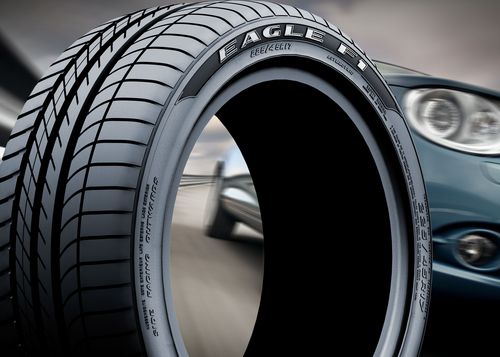 When we got to the competition , we found  that the organisers had opt for a different layout as what the other drift competition past had done in  Bukit Jalil. I would like to hand it to the track designer as he  had the knack of somehow managing  to lay the course on every single ripple, hump , pot hole and grill that you could find at this parking space. Yes ,I am exaggerating but I honestly felt that way during the  initial practice runs. The course looked deceivingly simple but due to the surface and the placements of the clipping points, the course proved to be very technical. 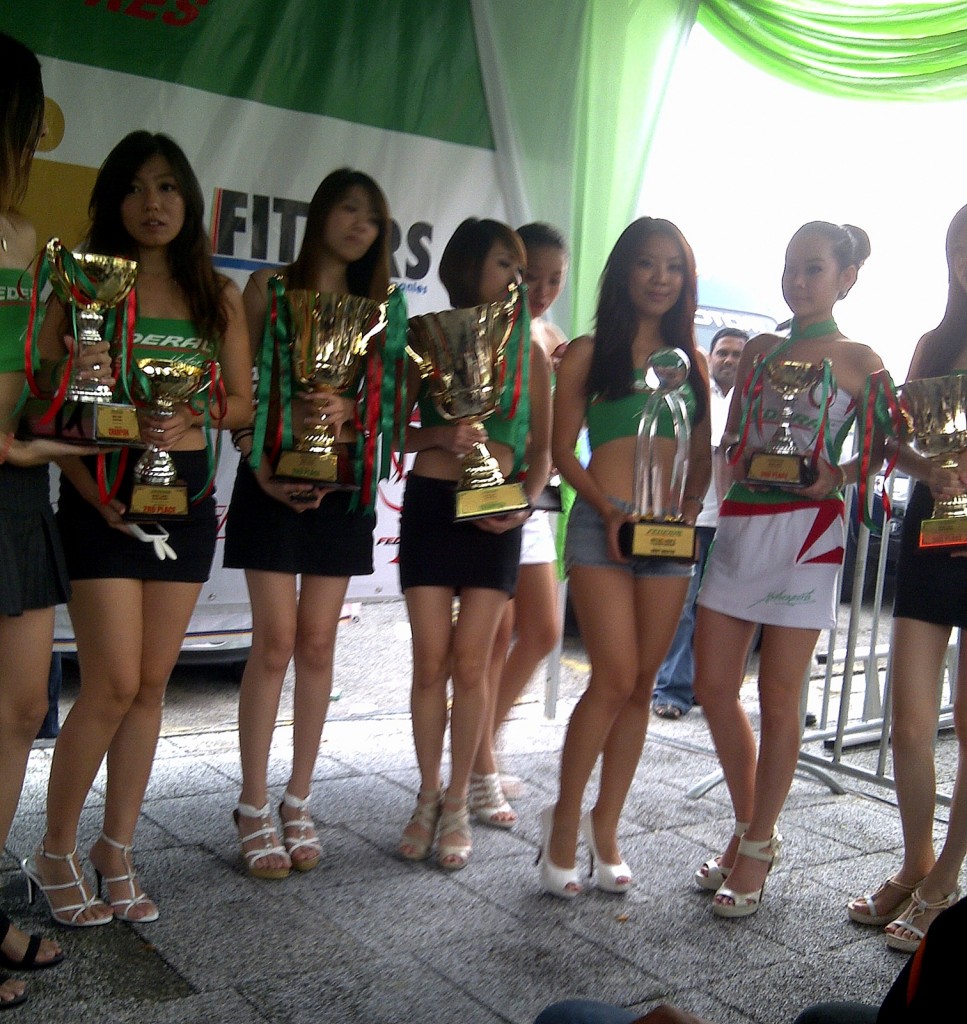 I was struggling during the 5 odd runs I had during practice as my car felt too loose and had the tendency of veering off course. I couldn’t seem to  get a single clean run!!! A quick check of alignment and tire pressure found that everything was in order but immediately when I went out again , there was a huge metallic bang during the initiation which followed by a loud grinding sound!!I had managed to blow my differential !! A quick call to Ah Wai, the flat bed carrier, had him transporting SLOW to Chi Kian Workshop to get the differential replaced. Though tragically this would mean I would have no practice time and  possibility not being to get the car fixed in time for qualifying, I was glad that SLOW’s handling woes I had experienced earlier could had been attributed to the failing diff. I decided to hang around for a few minutes  before having to leave to supervising the differential swap and got the chance  to watch the others run.

Everyone was nailing the course , most notably Jane with her aggresive smokey runs!With the competition being so close and equal, I knew qualifying high isn’t going to easy as I was certainly was at a disadvantage for not having any practice time.

I hug out at the shop, helping Kian as much as I could as his partner in crime Boy was on leave that day ,leaving him to perform a one man show at his shop. We got the final drive mounted onto the diff and into the housing and mounted it on the subframe, and as he started to tighten the mounting bolts I promptly left the shop.

They were calling for the last 10mins of practice when my SLOW finally  arrived back at the course .However as luck had it, practice time ended as I was about to reach the starting line!! I spoke to the start Marshall which then allowed me to drift the last few corners of the course just to see if the replaced differential was working!! 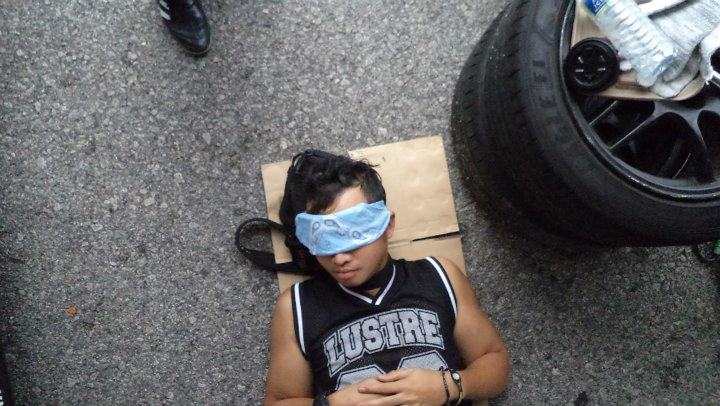 Anyway, 3 hours later it was qualifying and I somehow managed to qualify 5th with two very cautious runs and  Jane qualified 13th. This meant that both of us had the posibility of going against each other during the best 8 battle. 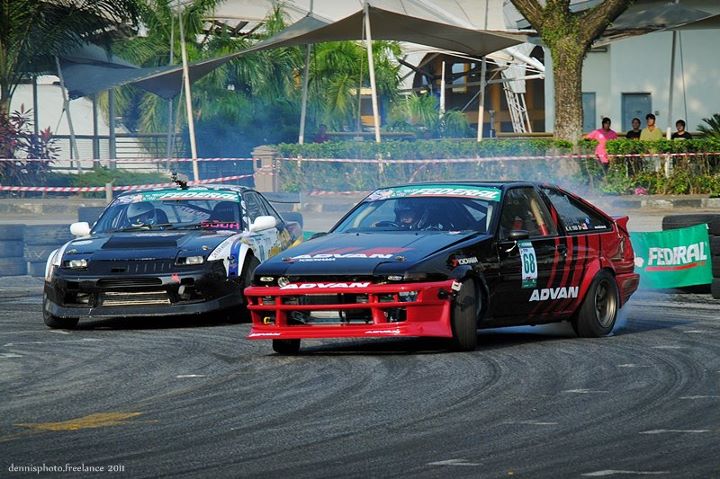 Next day during Best 16 tandem I was to go against Yokohama’s Ah Heng . I had watch his runs during practice and saw that he was fast and consistent on the course, a deadly combo.  But unfortunately his car had suddenly straighten while  following my lead thus sending him in to the tire wall. I knew I had a   huge advantage but I didn’t dare to risk being penalized for “playing it safe” and tried to drift as close to him when it was  his turn to lead.

After a few pairings it was Jane’s turn.She had the daunting task of going against the last round champion Along ‘Rempit’ who is fast and excels in tight courses such as this. 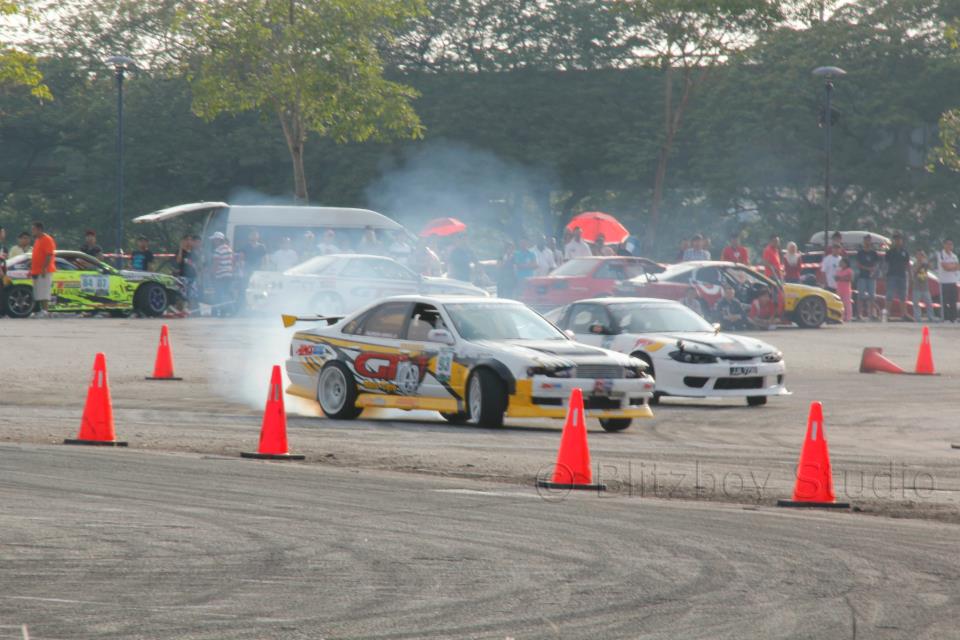 During Along’s lead, Jane had managed to maintain her distance to him throughout the course. 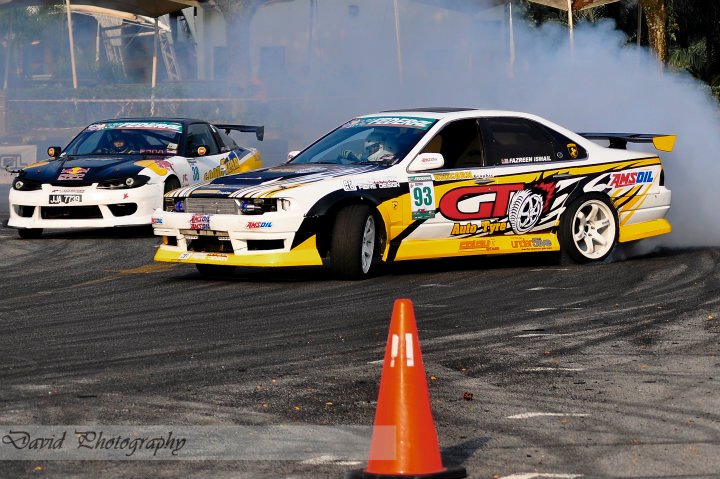 During Jane’s turn, Along made the mistake of diving into the inside during initiation and straightening soon after. This sent the nose of his car right into Janes side rear panel , making her spin! 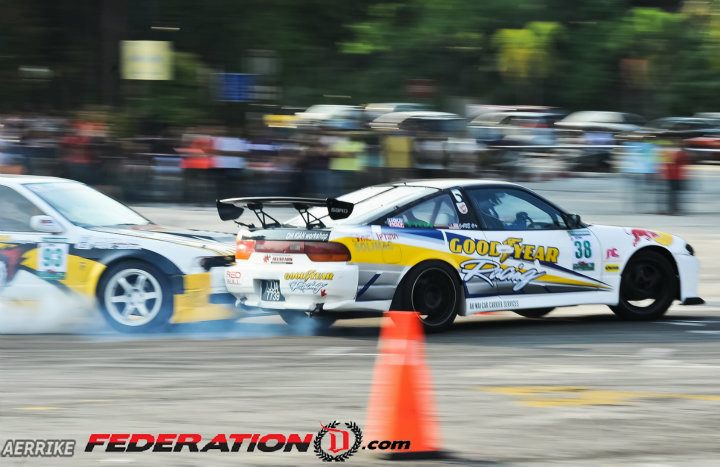 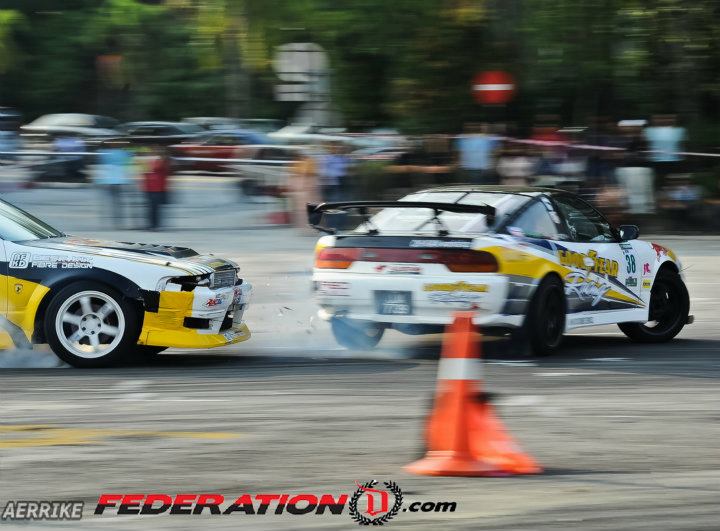 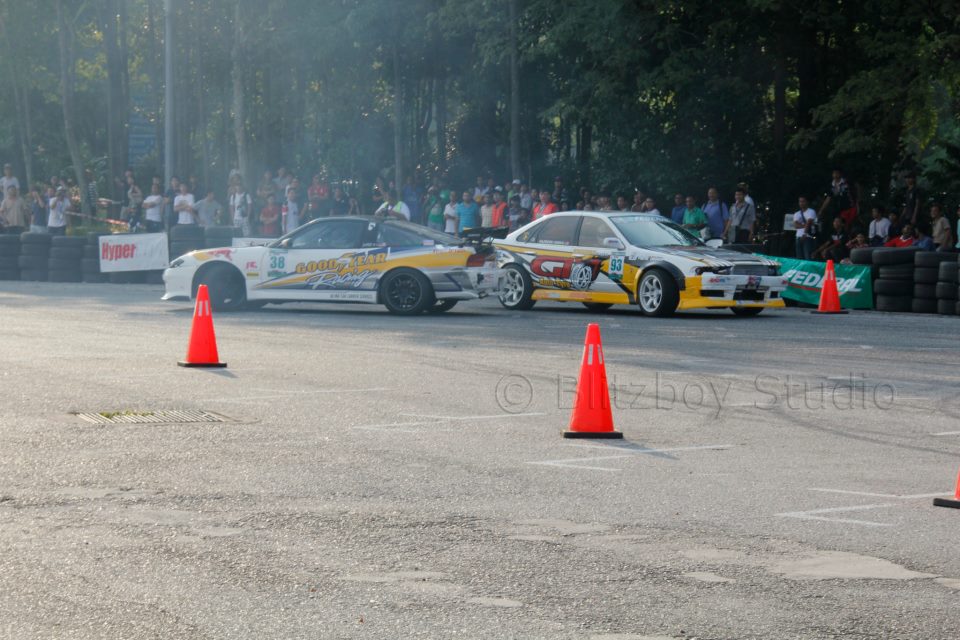 There was a sudden hush of disbelief  amongst the crowd followed by a huge cheer!!  This had meant that Jane and I would be going against each other during the best 8 tandem!!

If I was paid 1 ringgit for everyone who said that I would sleep on the floor if I beat Jane that day, I would be a millionaire! Anyway Jane and I had gone each other during competition a couple of times , once during MITC and the other during a KBS competition so it’s nothing new. We constantly practice tsuiso togather and I was fairly confident  drifting door to door with her. 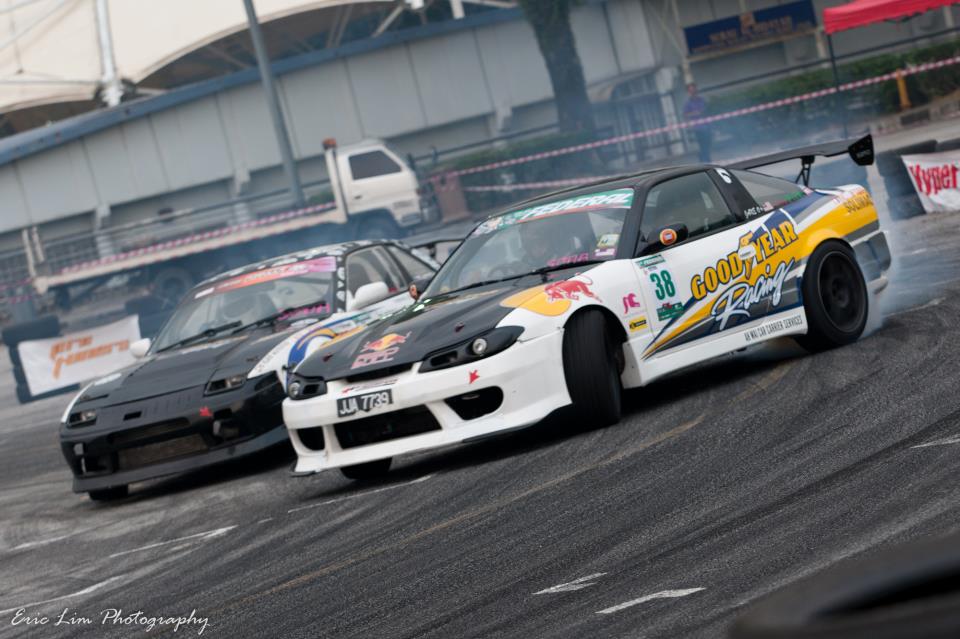 I knew she had gotten the course down so I took no chances while I was leading.  I drifted as cleanly and fast as possible and had to confirm with my spotter of the day , Jon, on who had the advantage after the run . When it was her time to lead, I managed to shadow her moves and managed to edge her out of contention 🙂 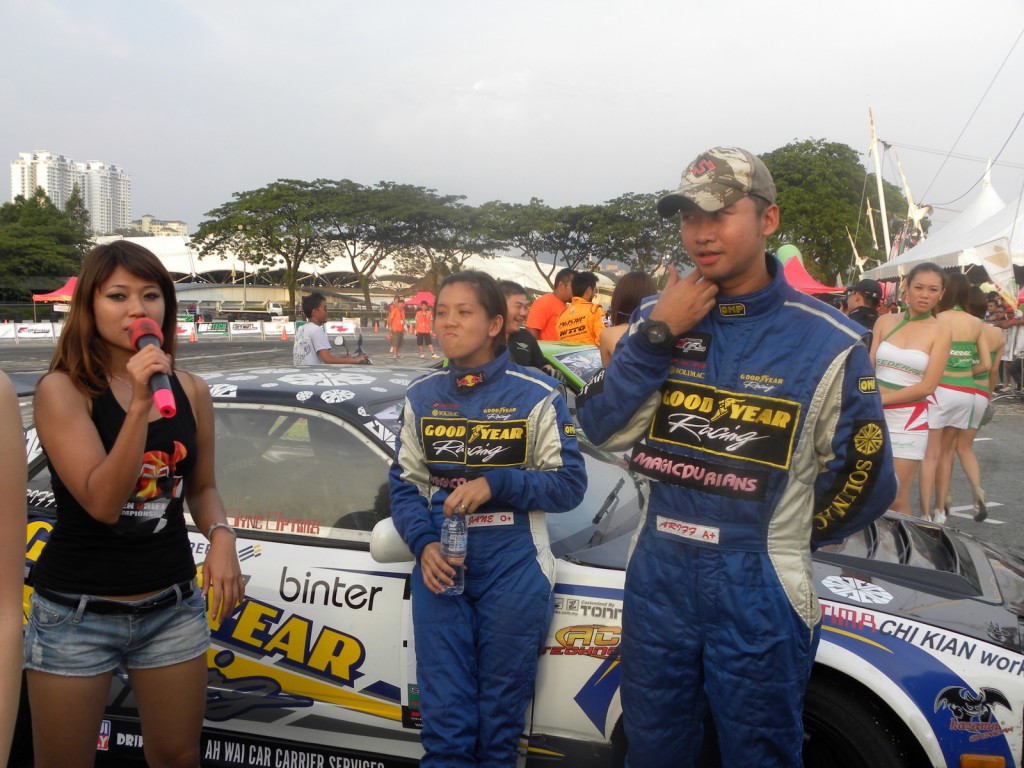 Top 4 was against ACE’s Boy. Boy was killing it the whole weekend! His flawless aggresive run had him as one of the favorites for this event. 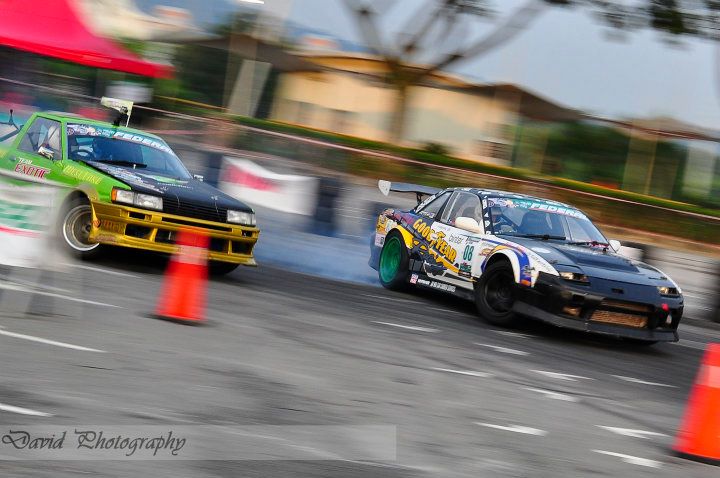 I knew this wasnt going to be easy but after two runs I was awarded the win as Boy was penalized for taking the inside line during his trailing run and I had managed to follow him a bit closer than he was while following me. 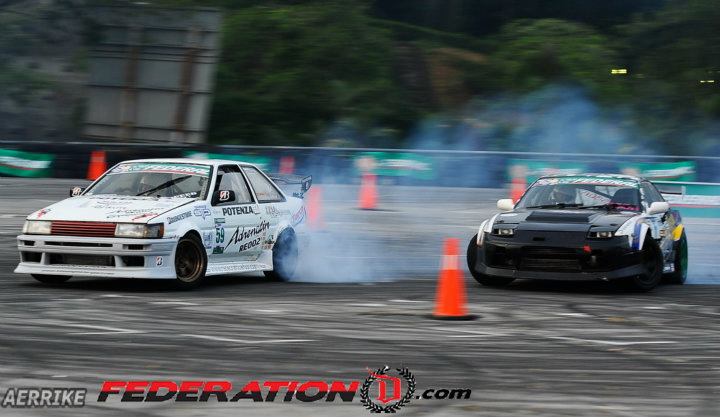 Finals had me going against my best friend in drifting Ivan Lau. We have huge respect for each other and had gone against each other twice prior to this competition. With one win each, I wanted so badly to win this battle . The first run had him leading with me trailing. I was all prepared for his lightning fast starts, like his previous runs in the competition, but was taken by surprised when he was feathering the throttle off the line!! I had to  slow down considerably and was position too far forward to follow his rear. As he initiated I took the inner line thus making it a shallower entry thus effecting the angle of my drift during the transition . This in turn made me dive  into the inside line at the rear clipping point . Its obvious the initiation had cause a chain of undesirable events which left me kicking myself all the way to the finish line. During my turn to lead I managed to distance myself from him but it wasn’t enough to overcome the mistake i had done earlier.Oh well……. I fell prey once againto tactics  but trust me  it wont happen again…for sure 😛 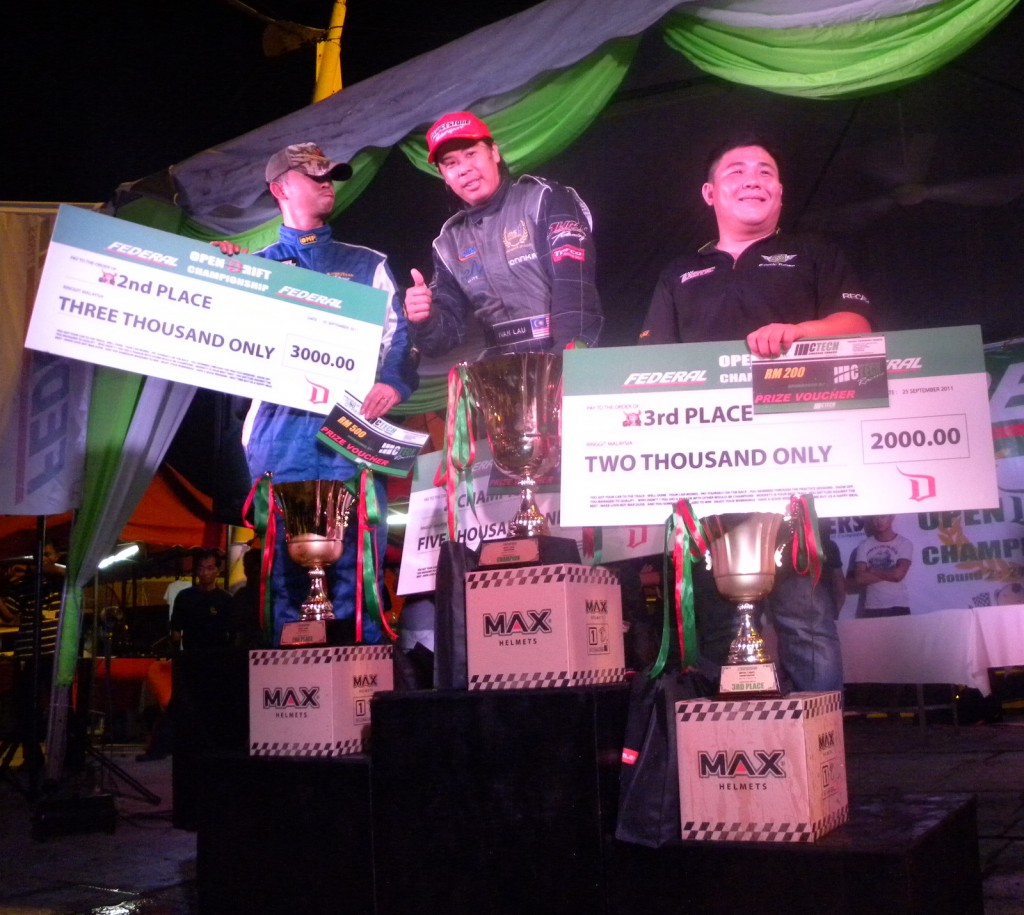 I would like to thank Cheryl for the videos she took..Jon for being spot on during spotting duties, Kian for fixing the car 🙂 and Jane for allowing me to sleep on the bed the night after 😛 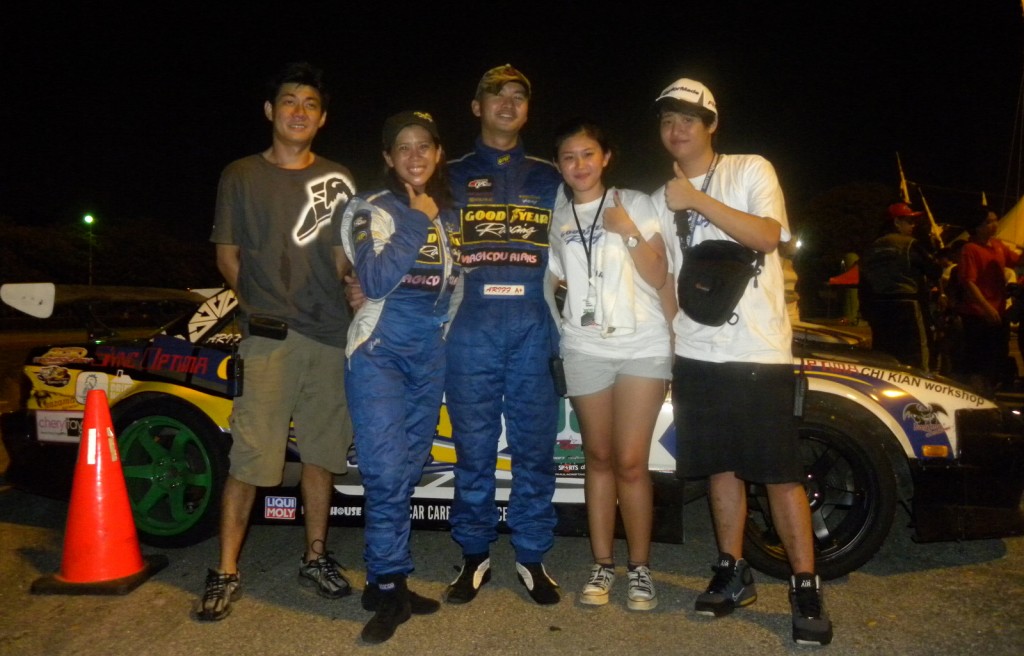 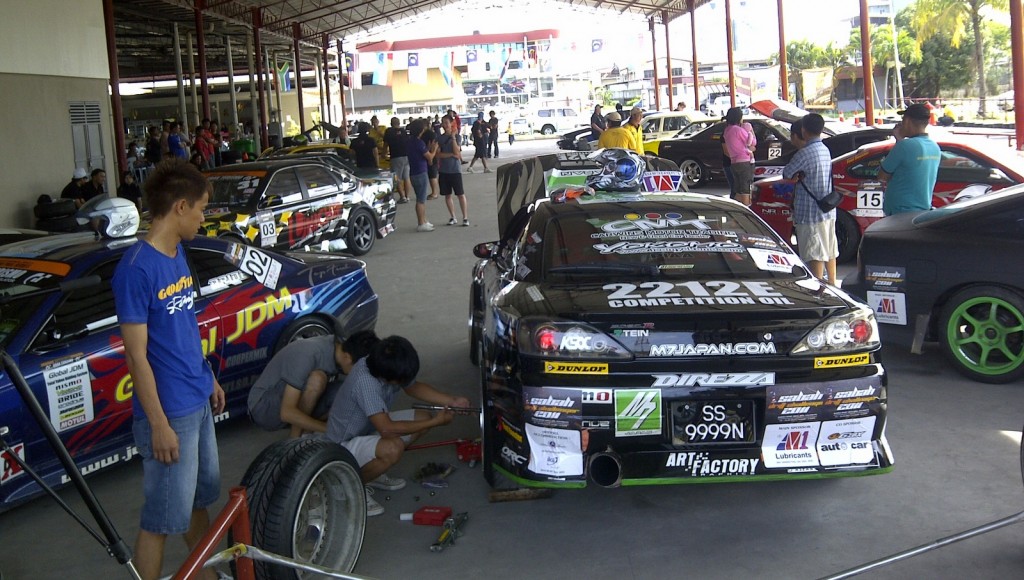 Jane and I were invited to help organise and judge the inaugural drift competition by KSOC title 1 Malaysia Drift Challenge.  The event was held at a BSA Futsal parking lot where a simple but very technical course was laid. 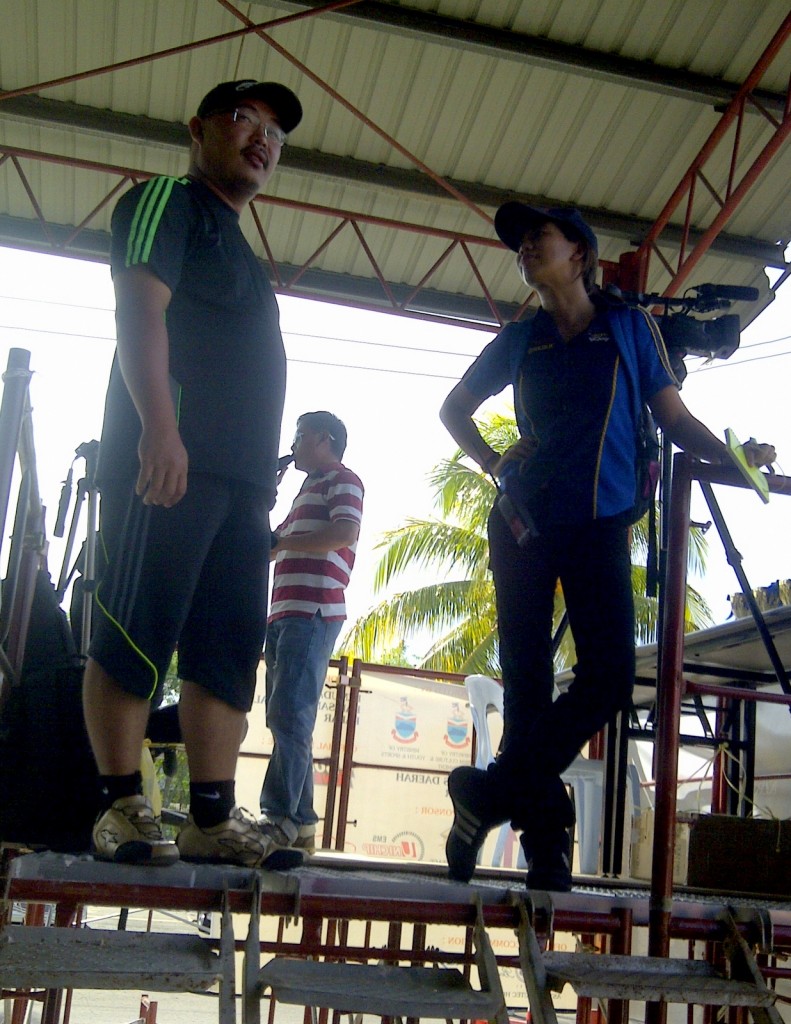 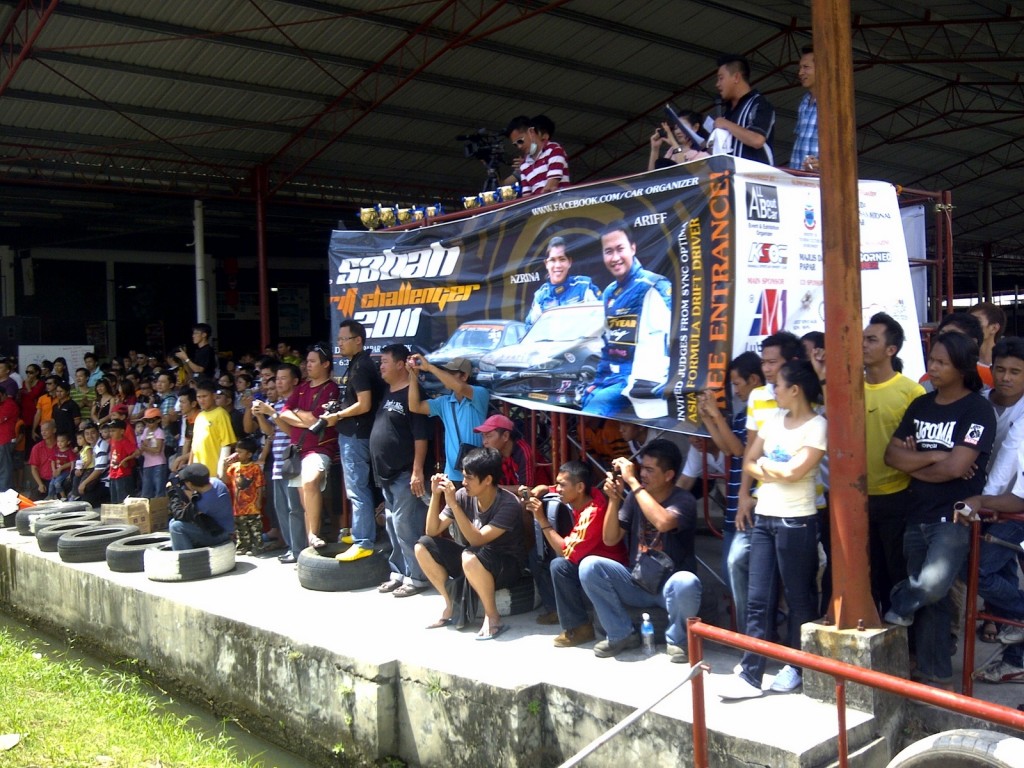 With over 23 drifters from all over east Malaysia, this competition showcased an impressive level of drifting .However, though their skill were high, the lack of experience of competitive drifting were prevalent amongst them. In particularly , the qualifying jitters which plagued half of the field .where these  drifters performed flawlessly during practice but failed miserably during qualifying. 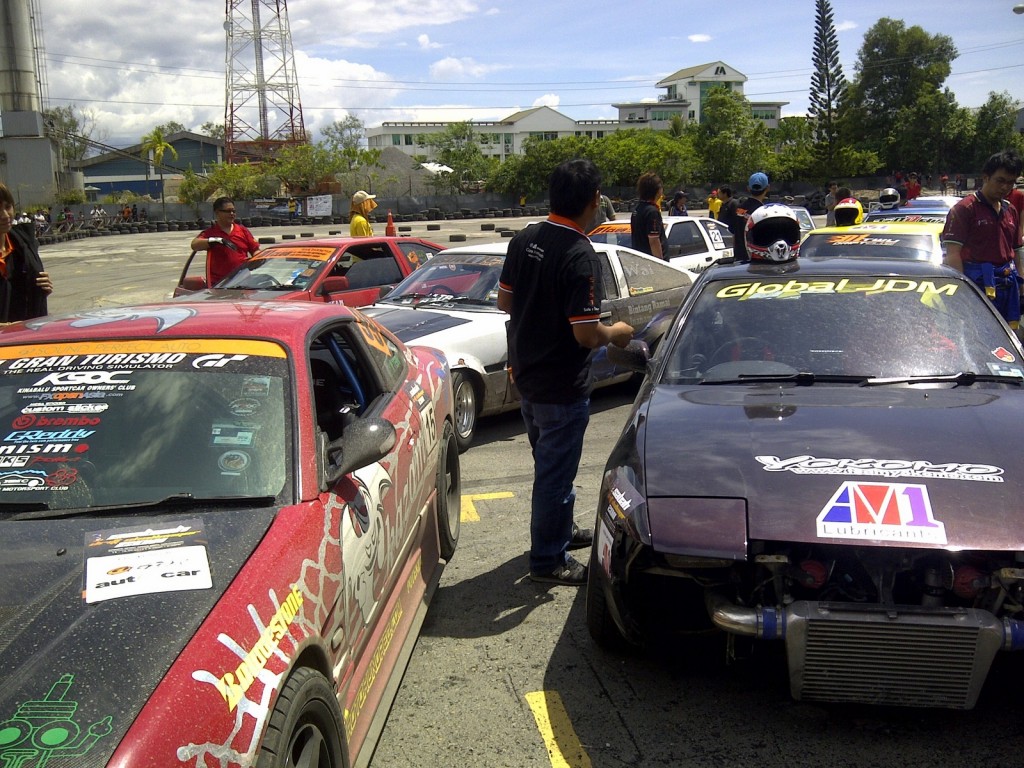 Heng was a victim, to name a few, who looked all set to dominate the competition with his aggressive yet precise practice runs but somehow couldn’t hold it together during qualifying thus failing to enter the best 16!! 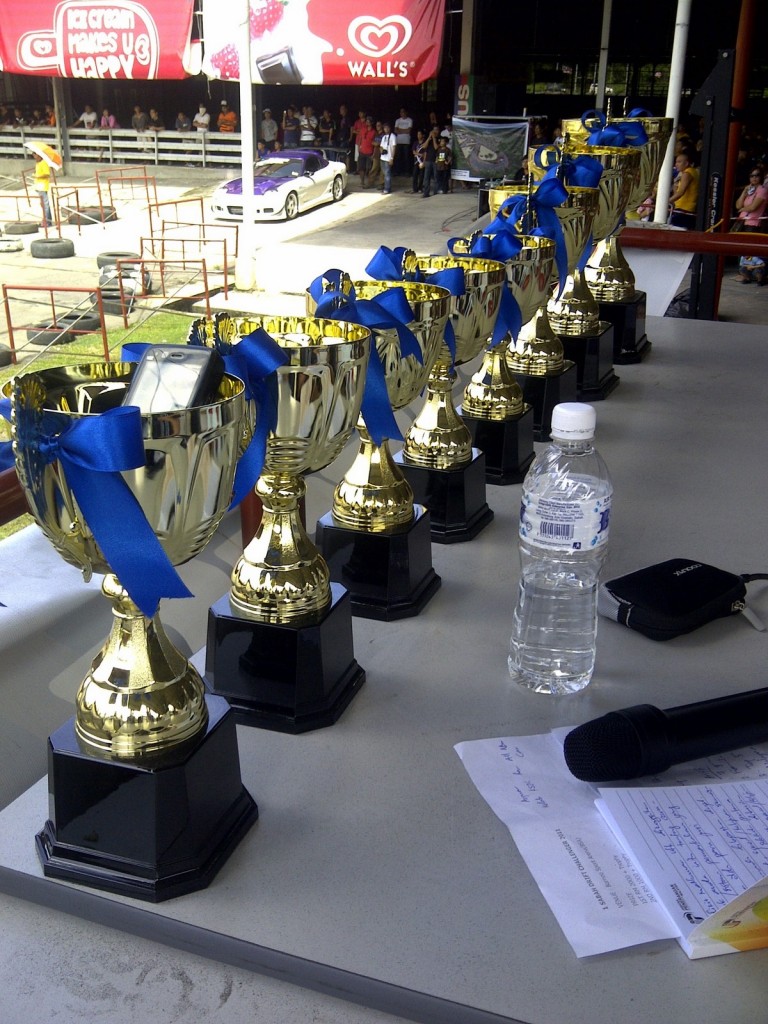 The competition went smoothly with a few very close judging calls made . I had specifically mentioned what I was looking for during the drivers briefings and made consistent judging calls based on it. 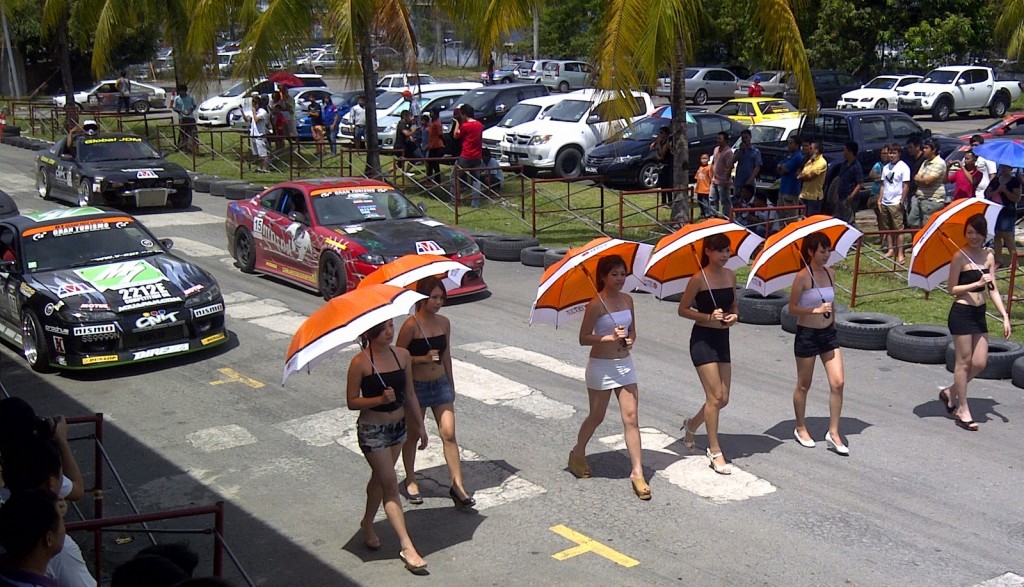 We would like to thank KSOC in particular Tony Wong for inviting us over , the members and crew who work relentless throughout the weekend and also Mah Lao for bringing us around and also having to wake up on an ungodly hour to take us to the airport.. Thanks buddy 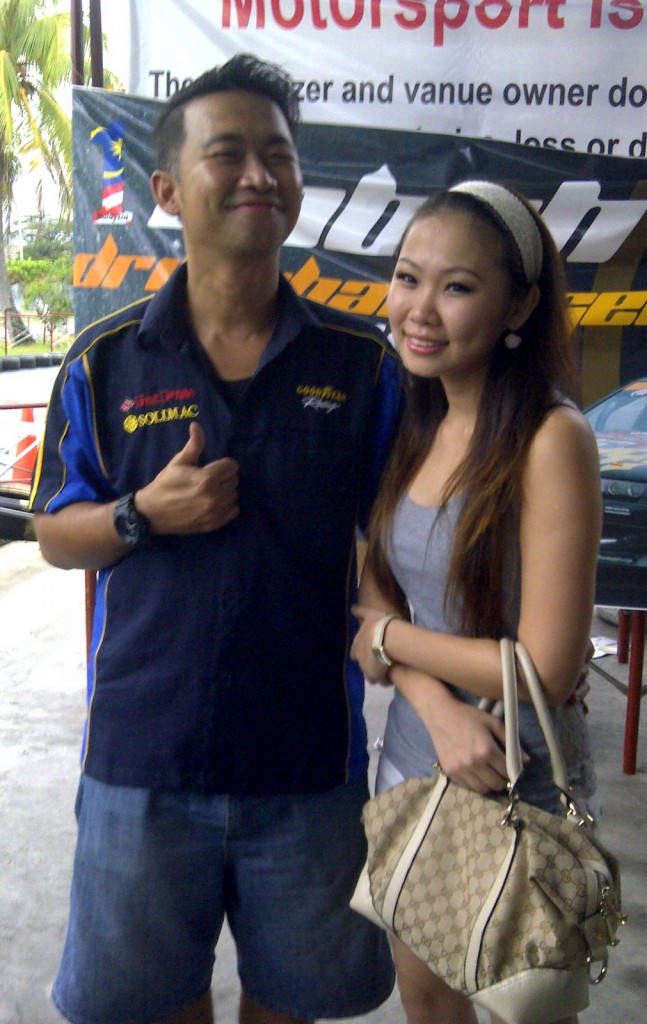