With a horrendous Formula Drift Malaysia 2009 and the Formula Drift Singapore 2010, Team Goodyear Sync Optima was really looking forward to the Goodyear International Drift Series . We had the cars prepared and preserve ( ie:not using on competitions following to it) as this competition  is on the top of our priority list for this year!

First day of practice went by perfectly as Jane and I basically got the course wired within a couple of tries and we were confident on doing well the next day.

Day two had us split into two groups whith us in the first group of practice.Having 1 hour of practice each group we had more than enough time to practice for the qualifying scheduled later.  As my ‘wonderful’ luck had it, 15 minutes before our groups practice ends, my prop shaft had twisted to a pretzel!! 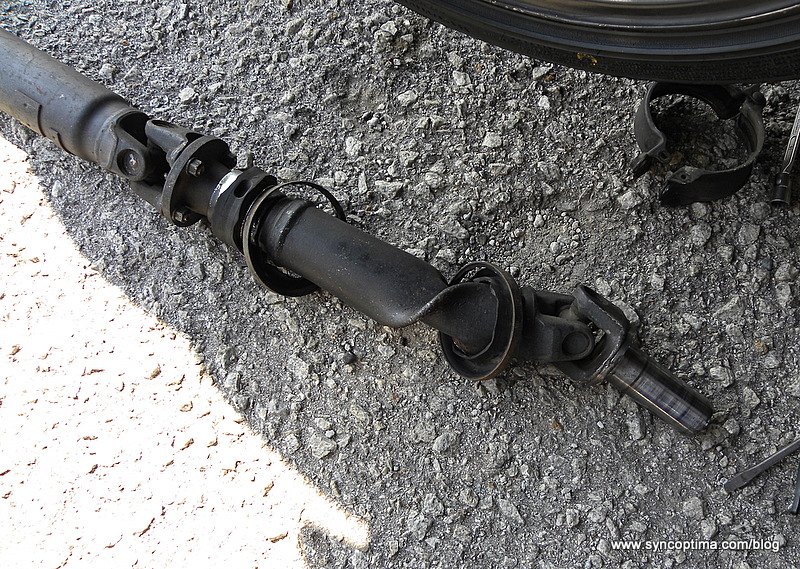 With only slightly over  an hour before qualifying to get the parts and fix it. I knew it would be  an impossible task ( which my crew did try anyway..thanks guys) and my day was over. So its a DNS ( Did Not Start) for me which I think is even worse than not qualifying 😛

Jane ,once again ,had her nerves get the best of her and fumbled during qualifying…oh well …call me a sadist but bring on round 2!!! 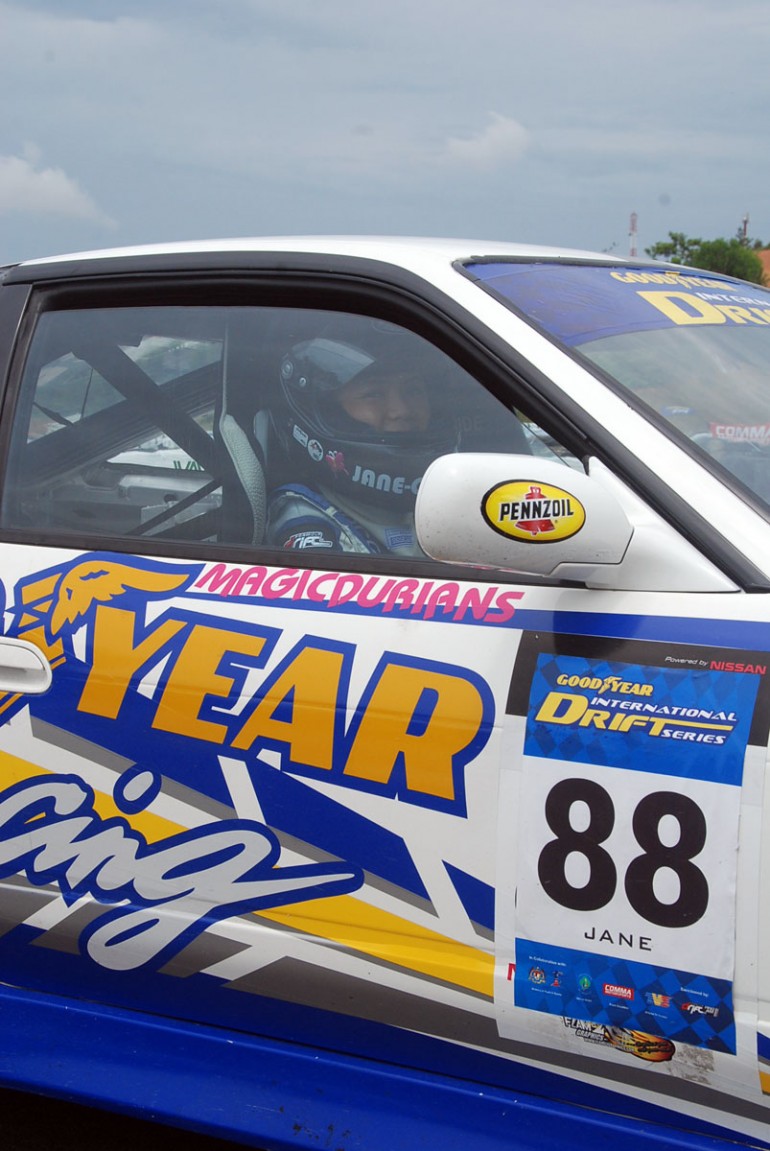 It was back to MIMC Malacca but this time for Goodyear International Drift Series Round 2. Having exprience the short comings of the car here , we had the s13 set up differently and was eager to see how it handles. Car handled alot better  but we  reckon that there were alot  more we could do to improve on . As always that will have to wait till after this event, once we get back to the shop . 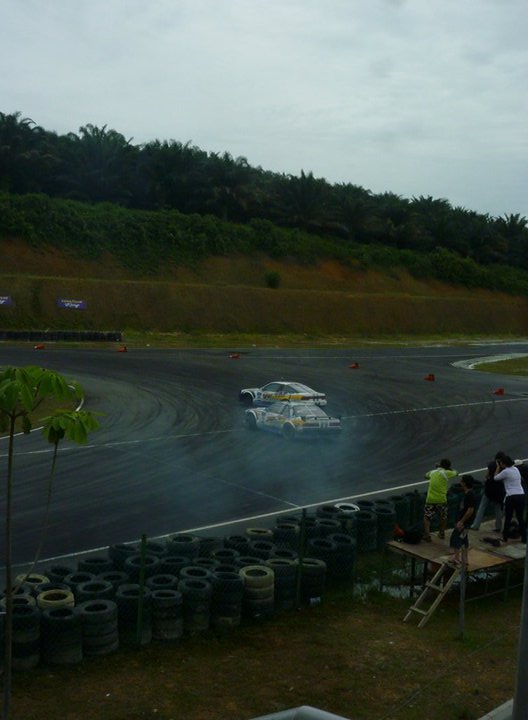 Jane had also improve remarkably with her runs now being more consistent and aggressive. We did practice tsuiso togather but she spent the bulk of  the the practice session with Tan Tat Wei .

Held the next day, qualifying had me leading during the first round with 87.5 points. However I was knocked off by Djan who had a 91.6 on the 2nd run!

Jane’s runs were smooth with  uninterrupted drifts . However her distance from the clipping points and zones  had caused a huge deduction in points hence having her failed to get to the Best 16. Nailing the points and zones is something I believe she well get better with easily, at the rate she is improving now. 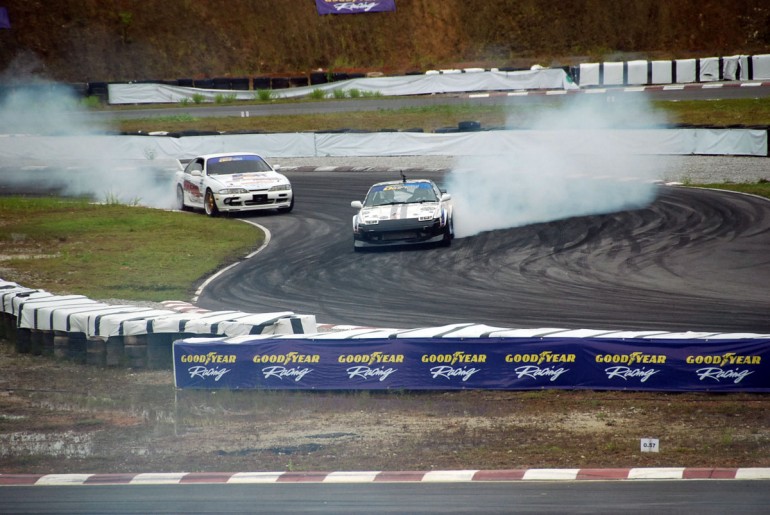 Having qualified 2nd had placed me on the other corner of the tandem chart which means I had to go out last!The waiting gave me the opportunity to get to know my tandem partner,Chester.He was driving a borrowed s14 since he car was badly damage during a crash at round 1! During our tandem battle I had managed to pull a gap when I was infront  .While following, Chester had straighten slightly at the first rear clipping which forced me to back down my pace.However there wasn’t any interruption of my drift all the way to the finish.

For the next round , I had to go against a friend and fellow Goodyear mate, Ivan Lim. He was struggling  of setup issues through out the event!! This had him straightening  and taking the inner line while I was leading and going off course during initiation during his turn to  lead. 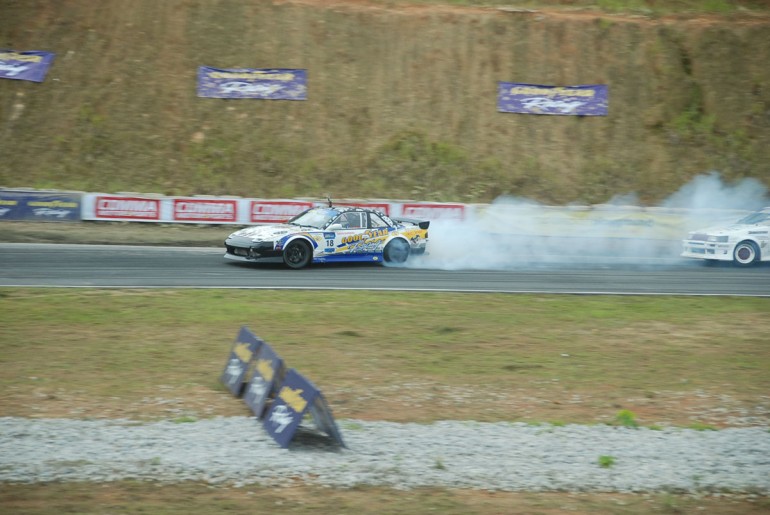 Ivan Lau and I always joked about how we never get to go against each other during competition.For this round we both got ourwish. While leading, I managed to get ‘an advantage’ when Ivan straighten and with me pulling a gap between us. During my turn to follow, Ivan had controlled his pace during the start forcing me to initiate at a much slower speed than I was used to. This made me  having to down shift immediately after initiation and fumbled during the up shift causing me straighten considerably longer than Ivan’s during the 1st run. The win was awarded to Ivan. I will definitely be wiser the next time around!! 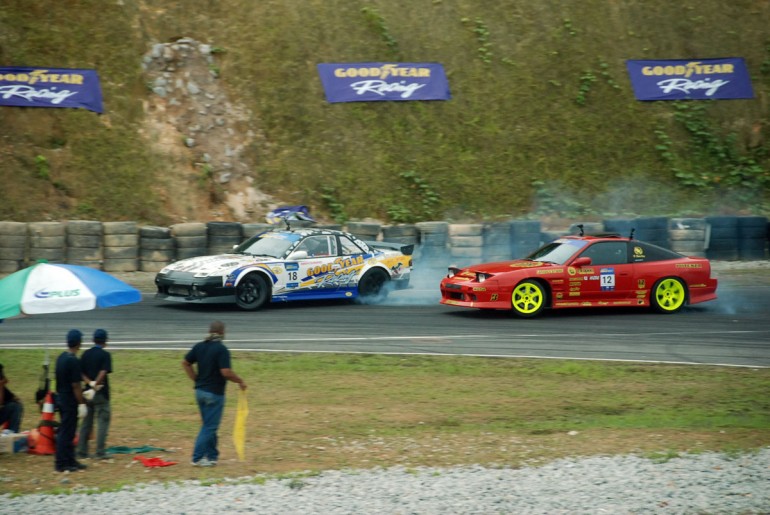 The final spot on the podium had me against Djan. He had qualified first , so he had the first lead run. I managed to narrow the gap though he had gained a healthy lead at the start. However I felt my line wasnt as good . Going into the 2nd run being unsure of who had the advantage, had me doing  my best qualifying run only to see Djan in the barrier when I was approaching the rear clipping zone.Thankfully the crash was minor and no one was hurt!

Though this wasn’t the first time being on the podium this year, I felt that this occasion  was something special as it is   Goodyear’s event..Hopefully my luck holds and do good  for the up coming events! 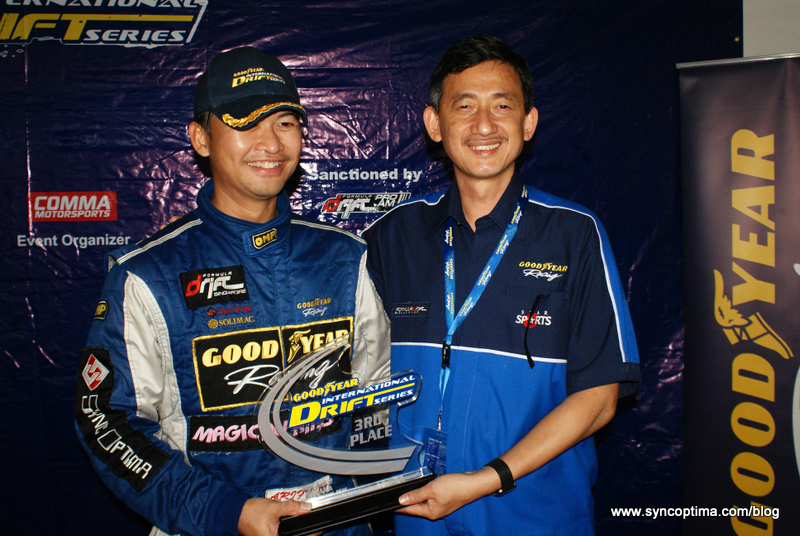 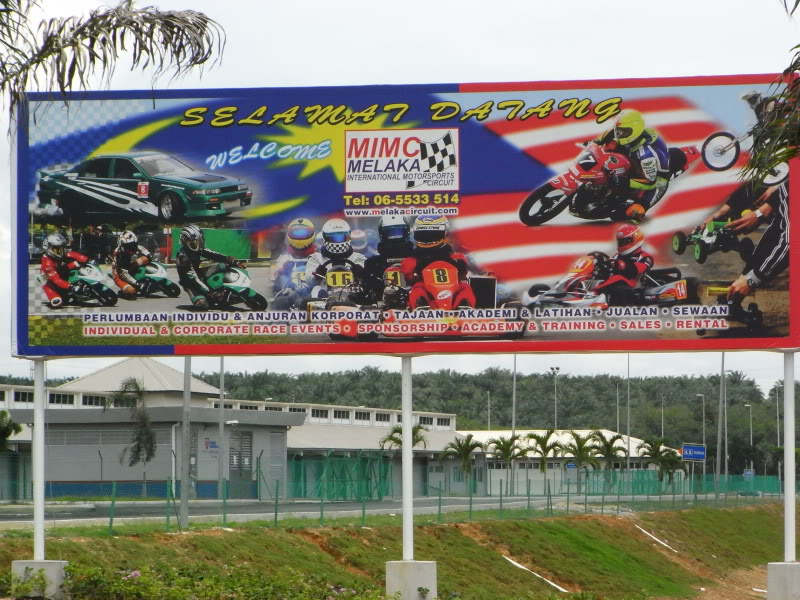 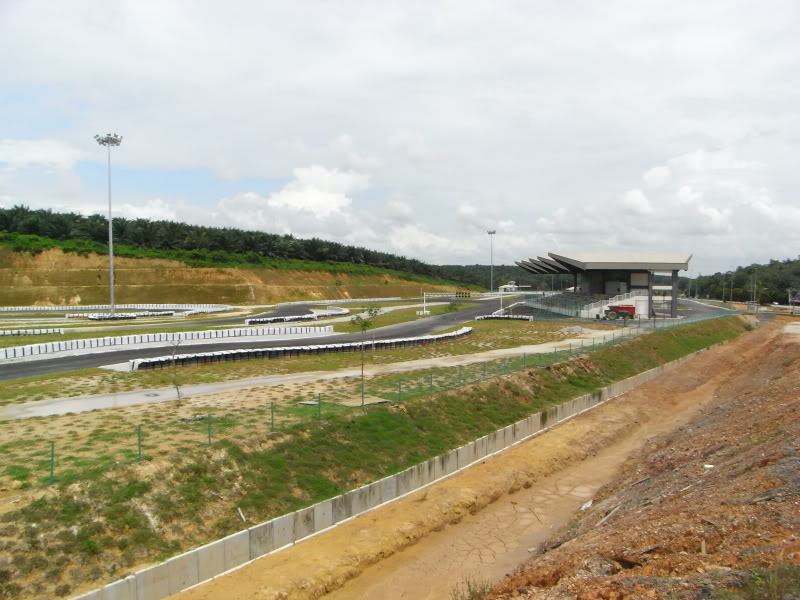 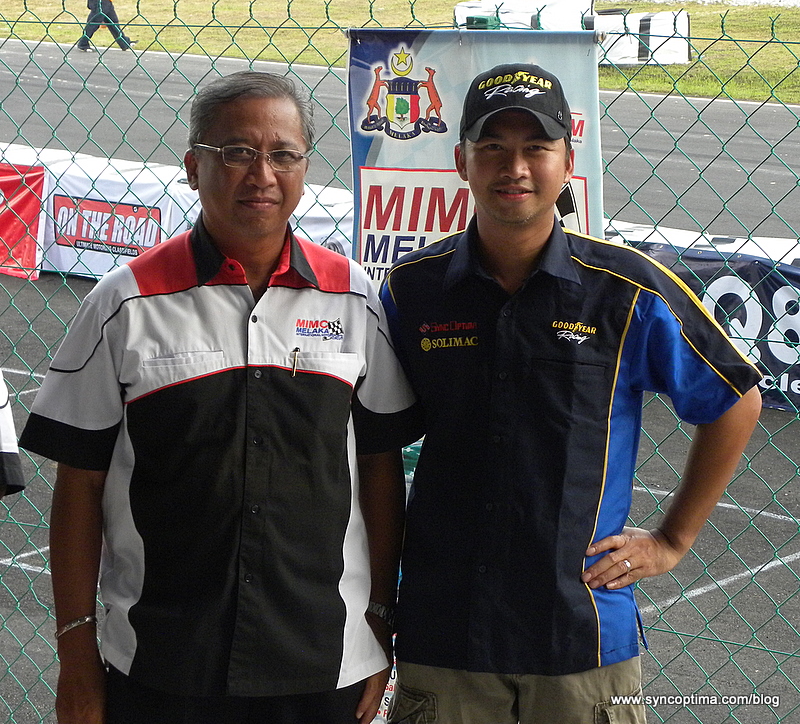 The Managing Director of MIMC ,Tuan  Shaharul B Hj Mohd Ali , someone that  I had the pleasure of meeting who is such  a charismatic yet humble person. Keep a look out for more good things to happen on this track!

The 1.7 km track  with a width of 10 meters promised to be a challenge  as the section used for the drift course has a  tight entry  which is   taken in  third gear!!  . 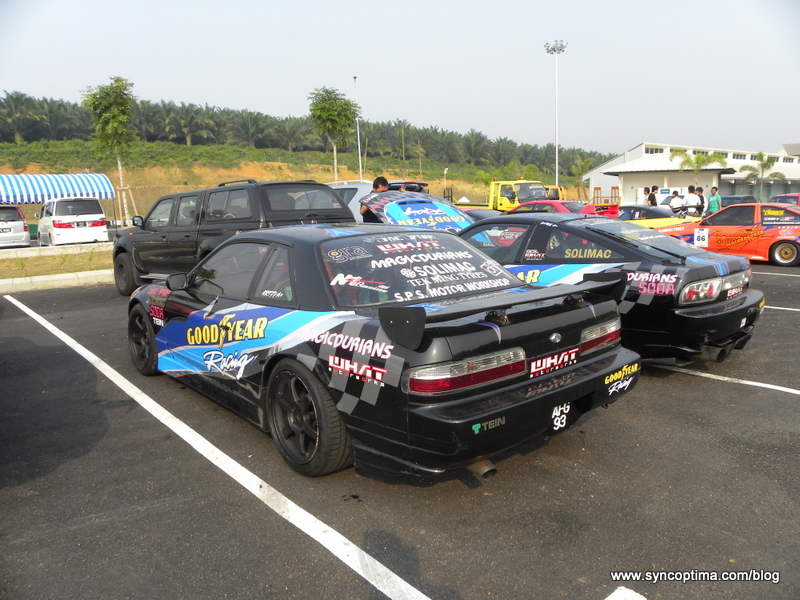 This track also  houses  top notched facilities such as shuttered pits, air conditioned briefing rooms and restaurant which  were made available to all the   27  participating drifters . 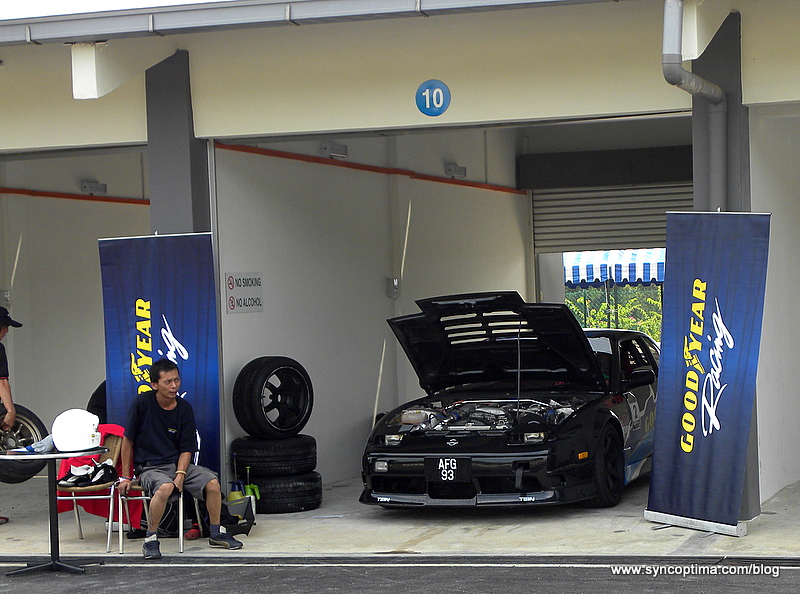 Leading to the day of the event, we attempted find out more about the course and had found a video a drift session they had a couple of weeks earlier.

Armed with that, along with the track lay out with the  ideal drift line diagram posted by the organisers of the event, we set off to the track early Saturday morning 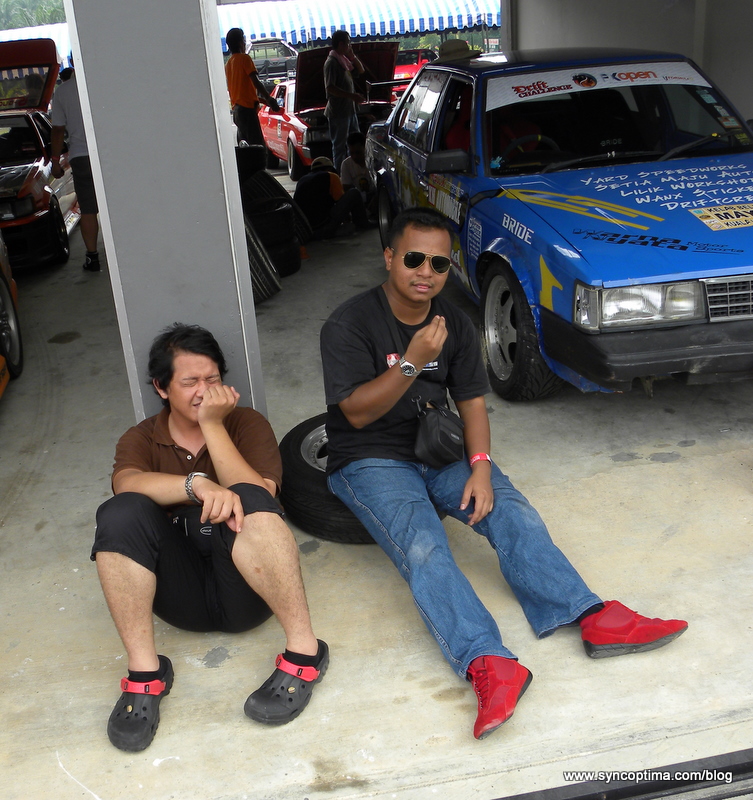 Some drifters skipped breakfast just to be there early.. 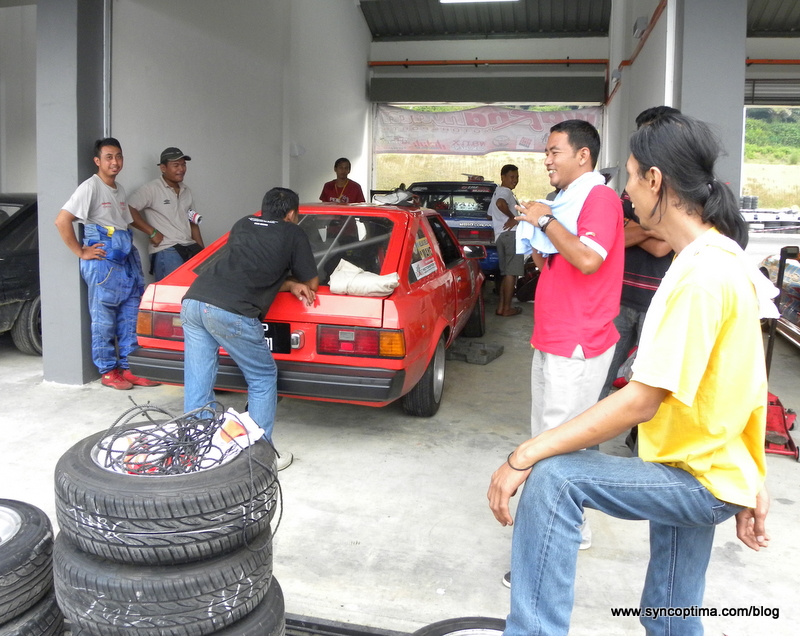 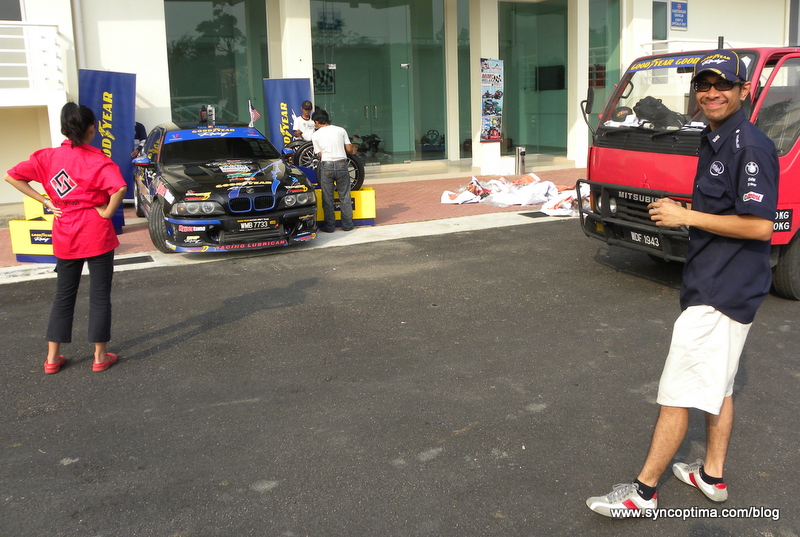 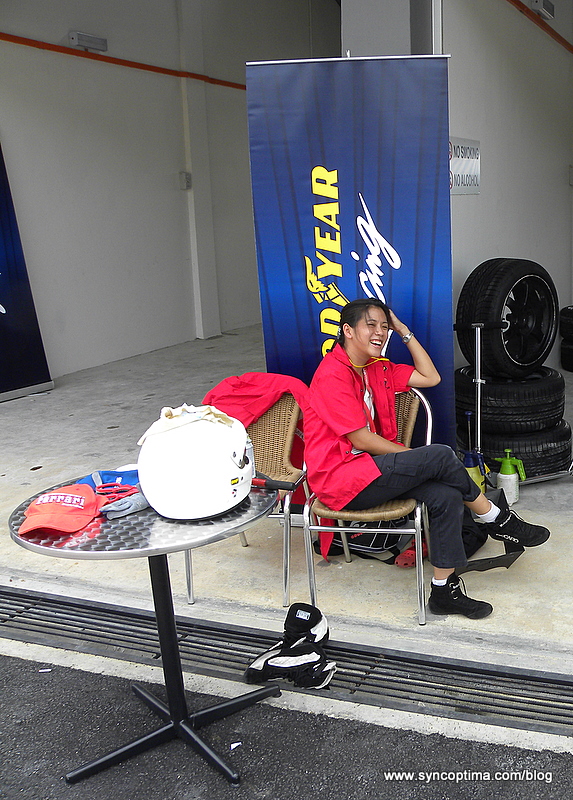 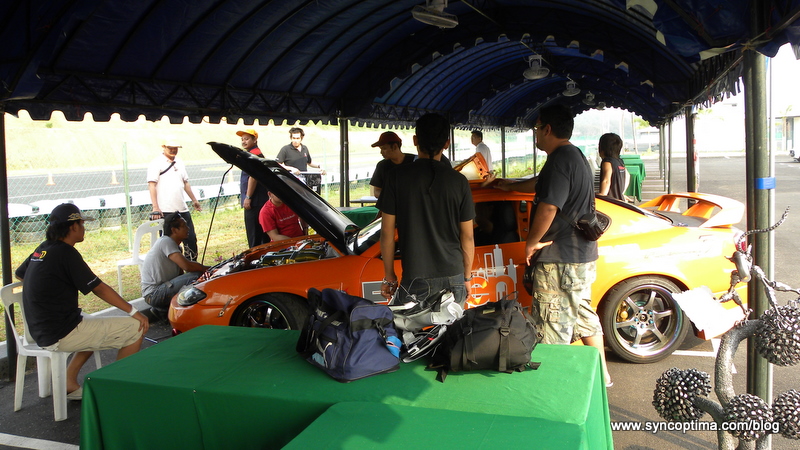 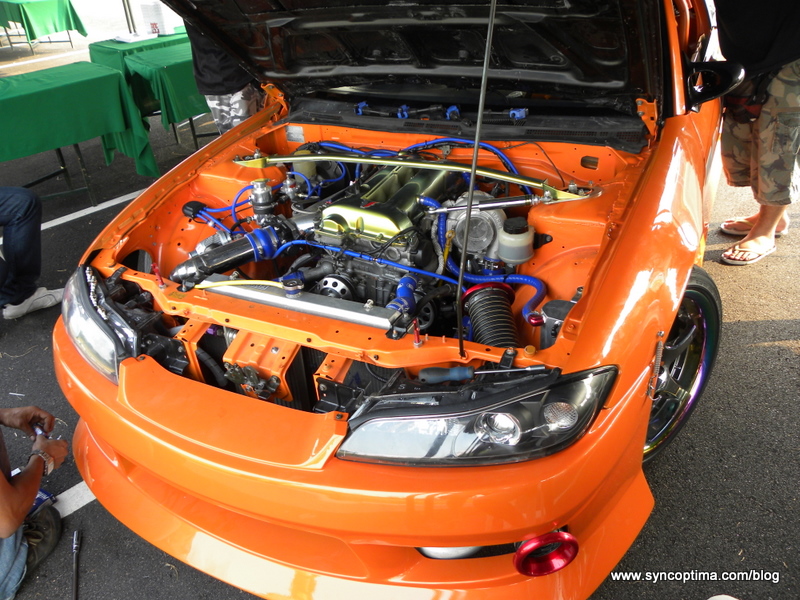 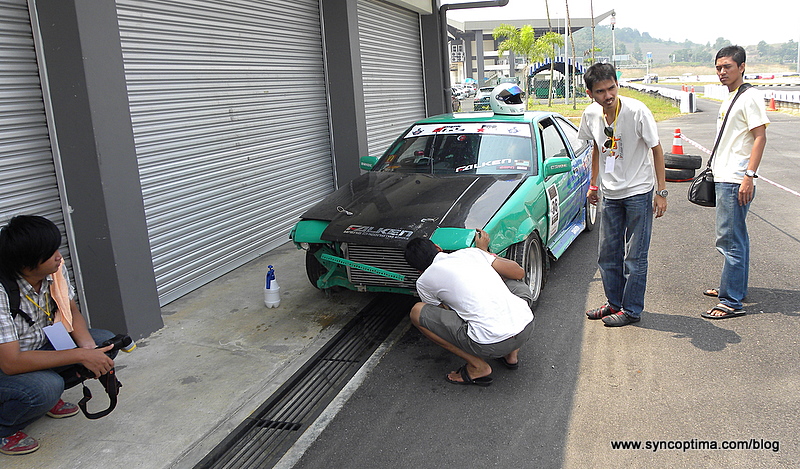 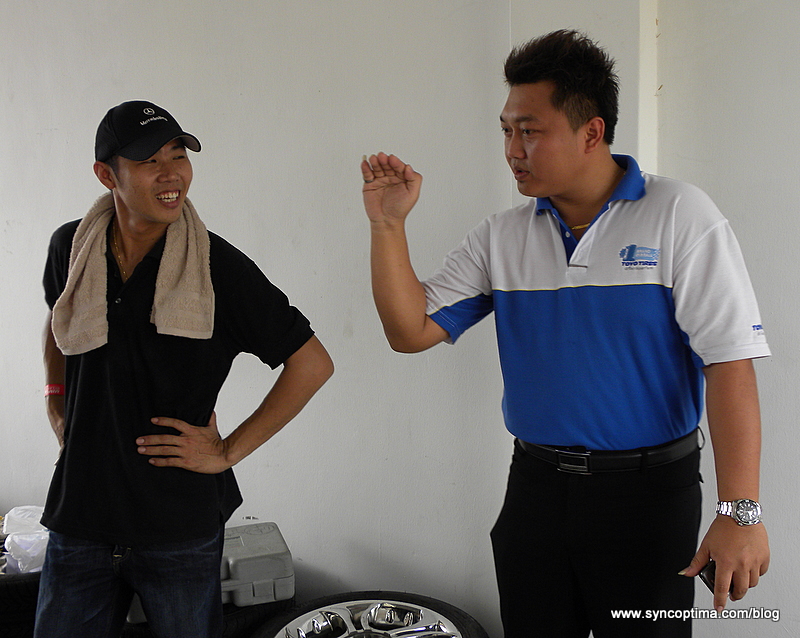 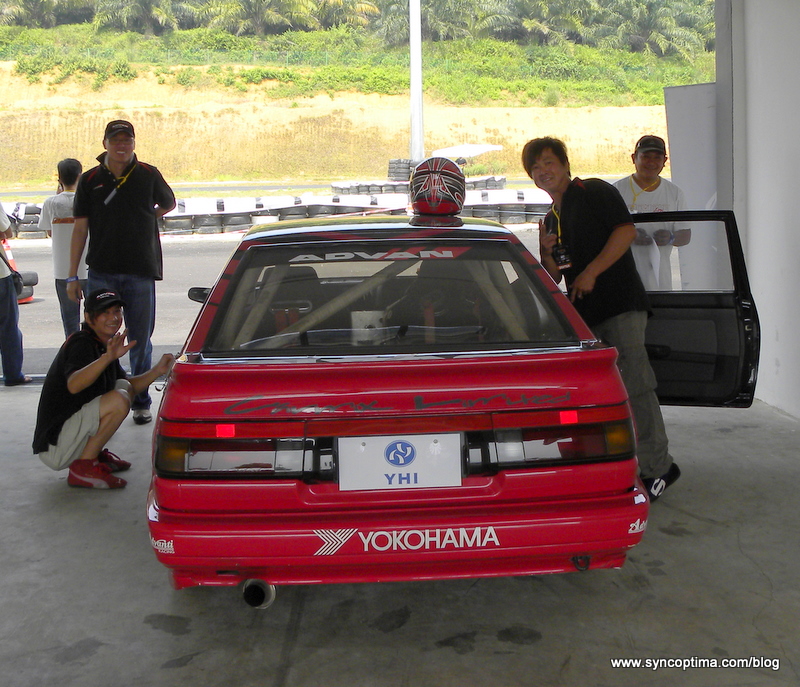 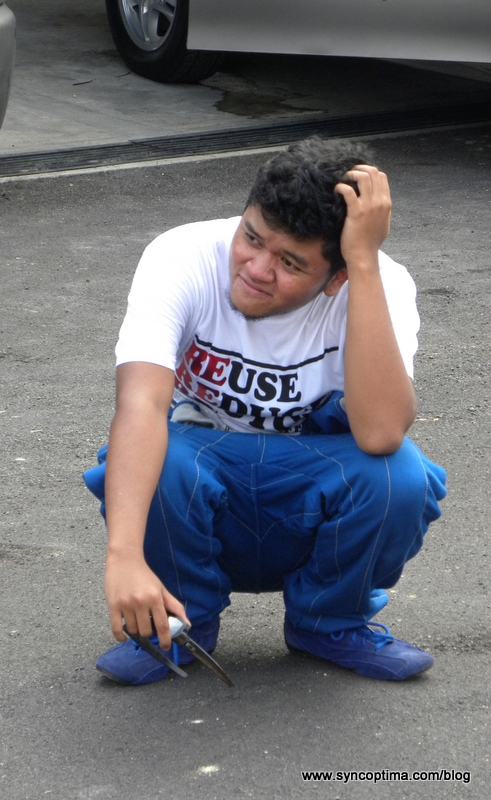 Practice  is the most important aspect when it comes to any competition as whatever your learn from it will be applied during the competition. However we were later informed during the pre qualifying briefing, that whatever we did during practice was all wrong, with  me in particular with the feint maneuver that I was performing prior to the entry .Having to go straight to qualifying without any warm up or practice for me to try out the next entry technique insisted by the judges, I had to make sure that my ‘winging it’ mode was enough to get me to the best 16th. Thankfully I managed a 9th placing with Jane doing well with a 16th in qualfying. Loyai was totally nailing his runs with ‘text book’  runs which earned  him the top qualifier position!!

Being in the last spot in the top sixteen had Jane going against Loyai who was in first. Jane held strong when following Loyai which earn her a 5-5 score but had straighten during her time to lead. I had to go against BoostZone’s Ng Choon Lai, who is one of the nicest person in the drifting scene but  is also one of the most ruthless competitor around!! With his beast of a machine and his expectionally high skills, I was in for a fight. I managed to hold my position during while being led by him  but unfortunately for Choon Lai  , he had veered  of track  when  I  was leading ! 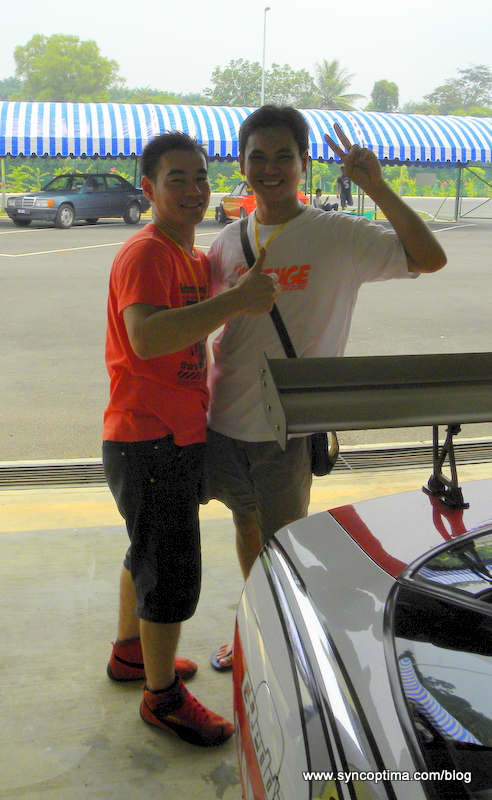 Ng Choon Lai on the right

Top 8 had me go against Loyai! As most people know, Loyai is a good friend  and we always joke about having to tsuiso against each other to settle any whatever arguments we get ourselves into. I found it funny that this time it was for real and Loyai came over to my  pit, handing me his handphone, asking me to protest to the juges about us going against each other!! Infact I was still laughing while we were lining up for our runs. Anyway the fight was close and I was awarded the win when Loyai had straighten at the first corner. 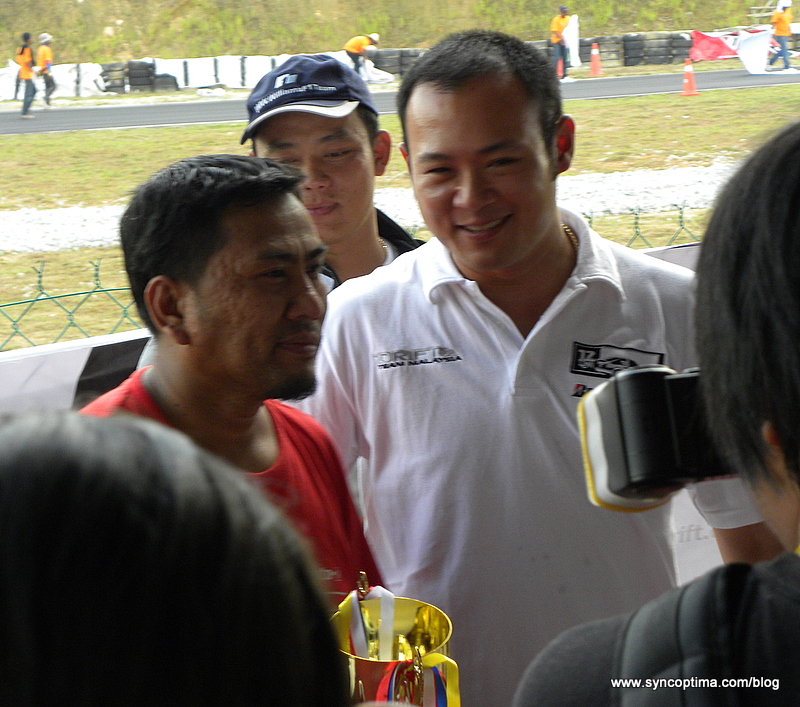 Loyai is the good looking one in the red t shirt , the other person is Djan..heehehee

Top 4 had me go against another BoostZone driver,KT Wong. Having one of the nicest AE86 around , KT was really consistent during his practice runs and displayed some nice tsuisoing runs with Ng Choon Lai during the practice run. I had an a slight advantage during my first run against him but was unfortunate to have spun out while recovering while  trying to avoid hitting him on the last corner! A silly mistake of being too aggressive which I hope  not to repeat! 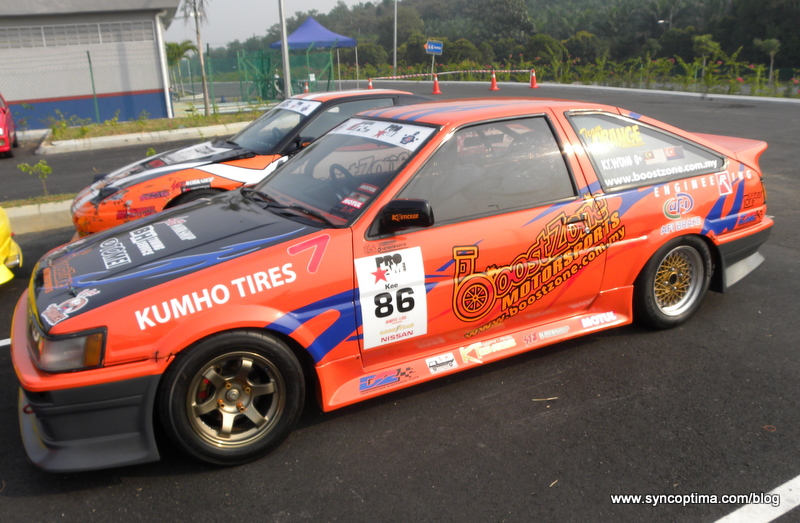 The fight for 3rd and 4th, this time around I had to go against another competitior with a’ smallish’ car driven by Derek Lim! He was super fast and had grip at wherever I had none! A one more time was called up and he promptly disposed of me thus taking the final spot on the podium!!! 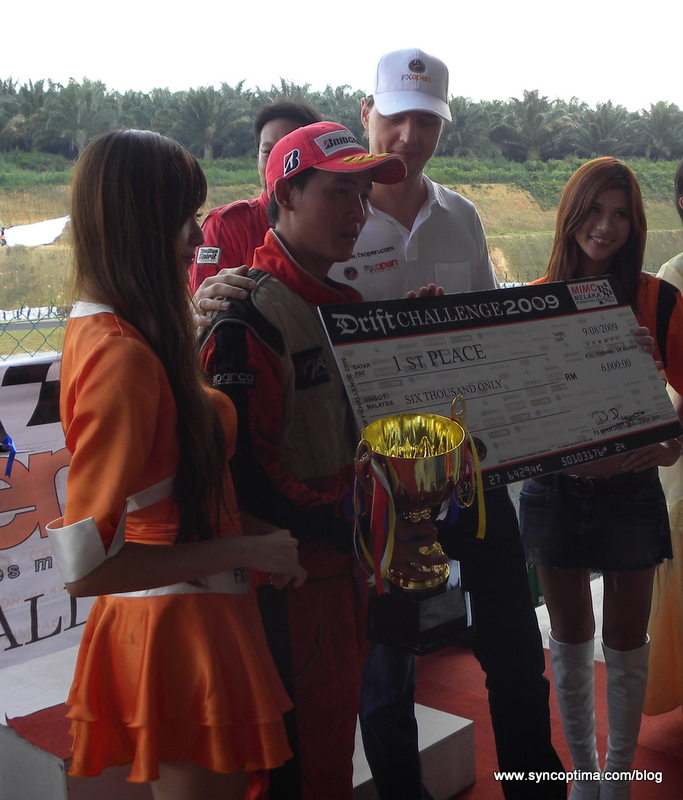 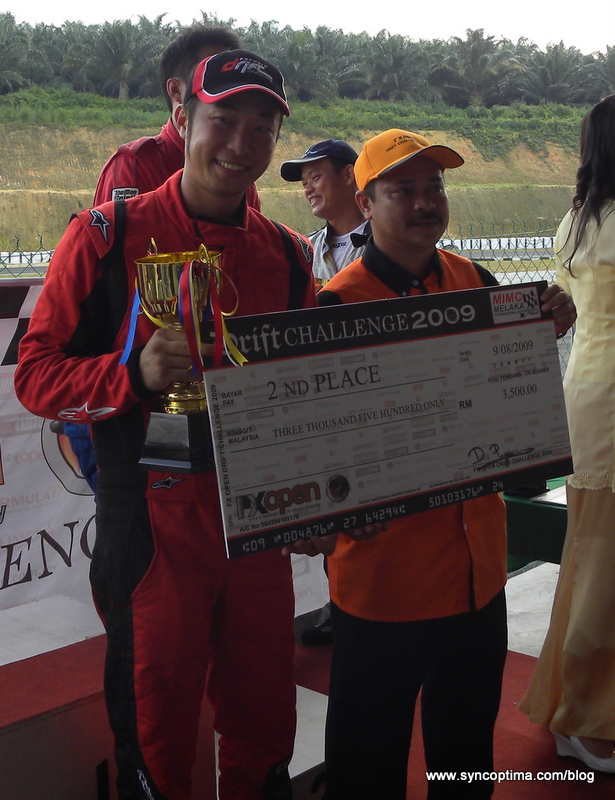 KT Wong, with a deserving second 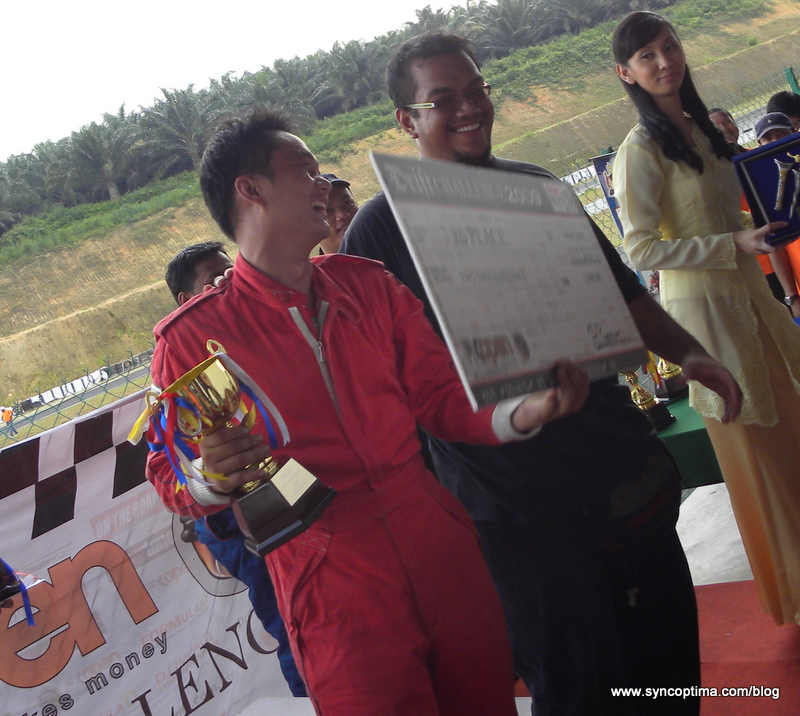 Derek Lim clinching the final spot on the podium 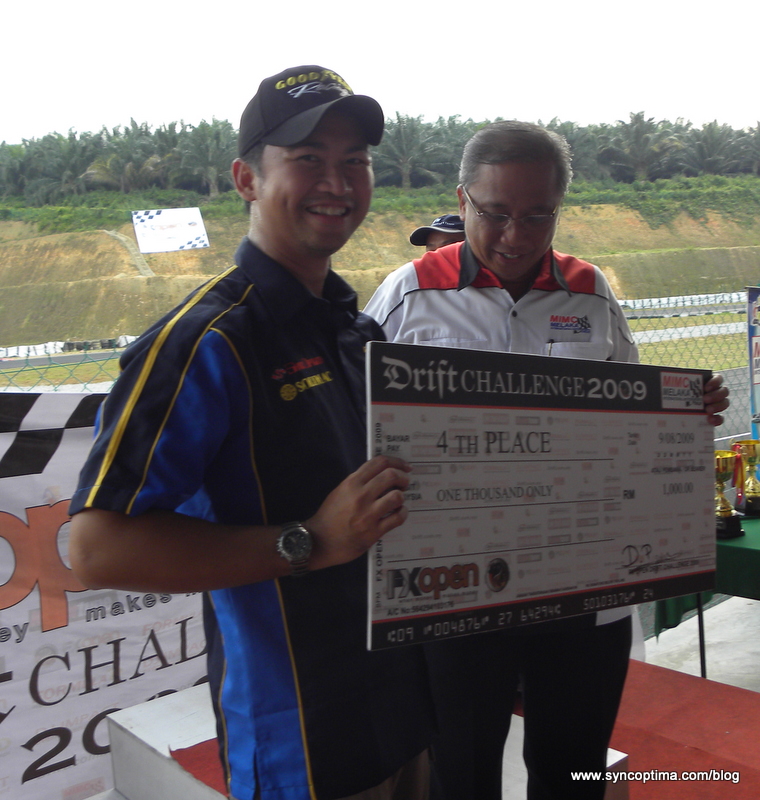 I suppose with Jane making it to top 16th and me getting a 4th placing in the finals  is not so bad considering what we had to go through; with me having to improvise during qualifying and both of us having to  adapt to a tire we were totally new to *. I am sure , both of us and the team  , have gained from this experience which we will reap its benefits in the near future!! 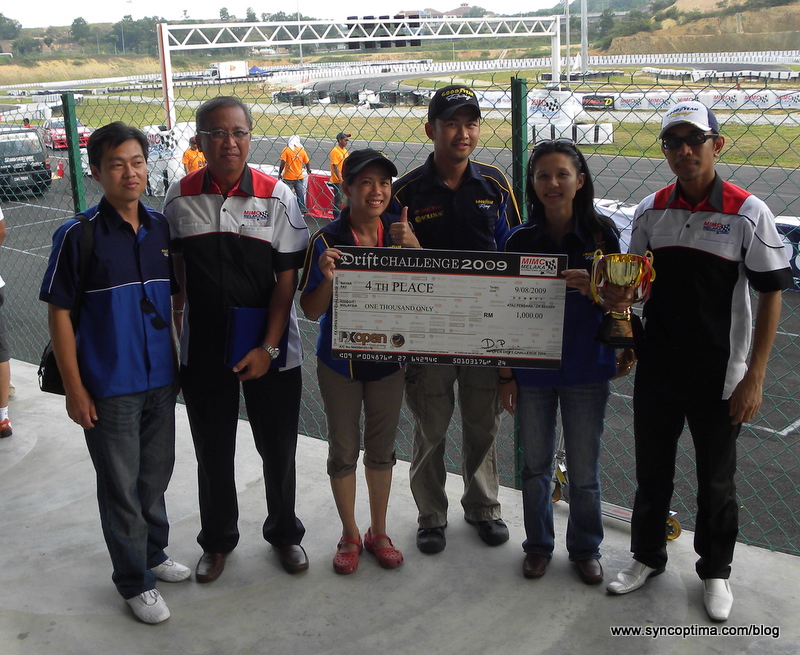 Goodyear’s Mr Law and Puay Ling came all the way from KL to watch the competition.!!

*Incidently,   this   event   was our   first   time using the    Goodyear F1 Asymetric tyres. This tyres has been given 5 star ratings in their reviews and we were excited to be given the chance to give them a try. Off the bat, I was impressed with how high the grip level was when it was cold. Unlike the Revspecs which requires to be heated up, the Asymetrics were spot on during my first few laps on the course. With its deep grooves in its thread design, I believe this tire would perform expectionally well in the wet too!! Bear in mind, these tyres were not designed for drifting ,which puts the tires through extreme abuse and tempretures ,something that normal road user will never put the tires through  .In that aspect ,the RevSpecs were a lot better as  we had trouble adapting to the Asymetric’s  characteristics when the tyre and track tempreture went up ,causing a few off road excurtions for both Jane and I. However , given time ,I am sure with a bit of tweaking of the car’s settings, this could be easily be remedied . Having said that, for normal driving with a couple of sprited runs thrown in for good measure, regradless of the weather or condition ,the Asymetrics gets 5 stars from me too!!