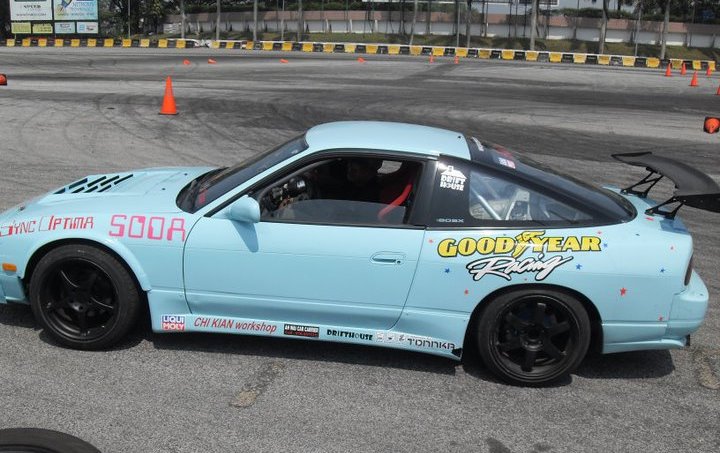 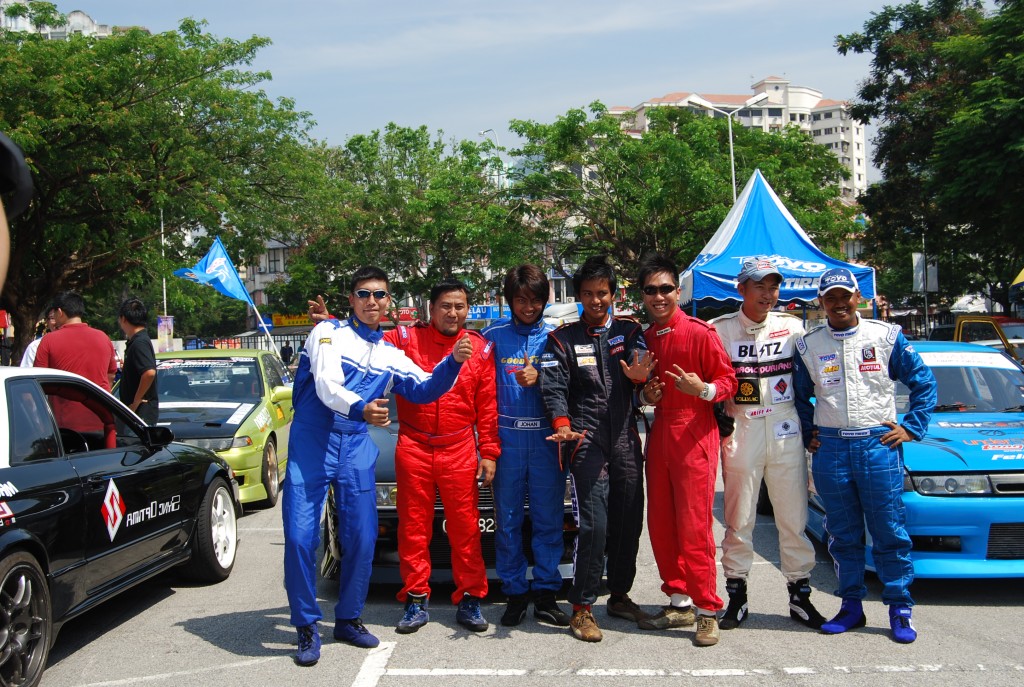 We certainly rocked Penang the whole 3 days we were there!! 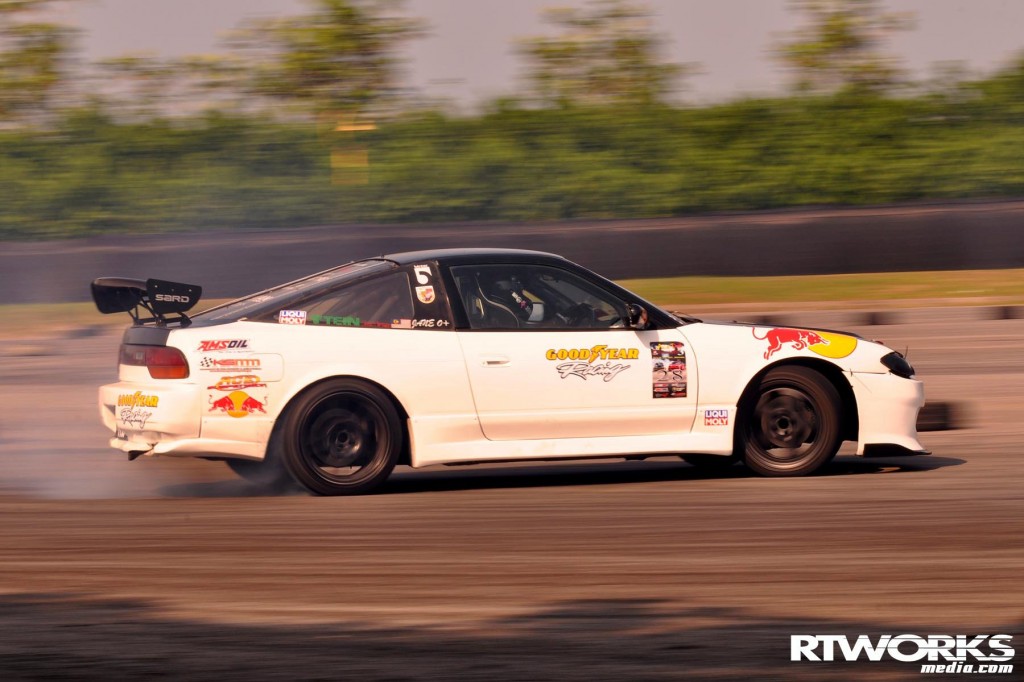 ACE Drift Challenge Round 3 weekend started early for us; the drifters from Drift Garage Singapore had booked a private session for themselves a day before the weekend and had graciously included us . The session proved to a fun filled event with the majority of them improving  tremendously since I last  drifted with them in Mardi. Joining in the fun was also our returning drift student from the states , Bob, who had just ungone an intensive Figure 8 training conducted by the famous Team Orange in Ebisu Japan (heeheeheehe).Having to stretch the limited amount of allocated  tyres, for the 3 days had forced us to resort to drift on  used tyres from past events. The term going fast nowhere comes into mind especially when our tyres we down to the threads but in all honesty, a number of the Singaporean were so fast that the outcome of being left behind even with fresh new tyres would not suprise me. 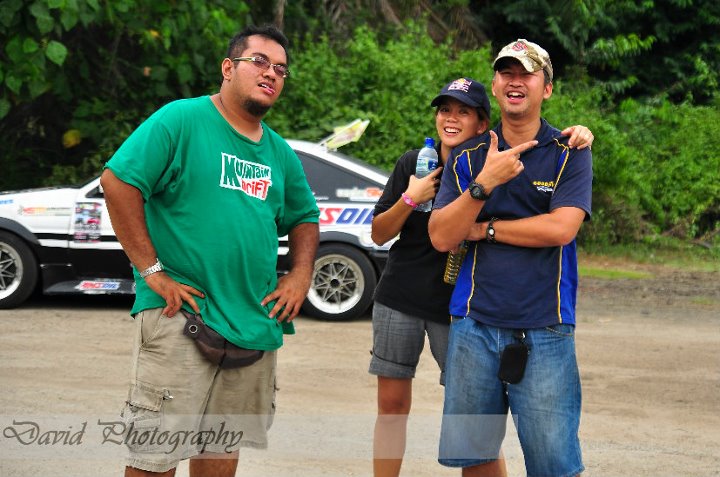 The next day was the  official practice day for round 3 with Jane and I still going through our last few pieces of used tyres. As the clipping points were still not placed I basically took it easy and spent time “hanging out”  at our pit. Joining us today ( they actually arrived on Friday night) is the lovely couple Cheryl and Mike which proved to be entertaining to say the least. My sister inlaw (Jane’s sister) and family also arrived today bringing along with them our daughter! With such company who has time to drift?? Anyway, Jane’s transmission broke (again) thus forcing Kian and Boy to come a day earlier to get the box fixed for tomorrow’s main event. 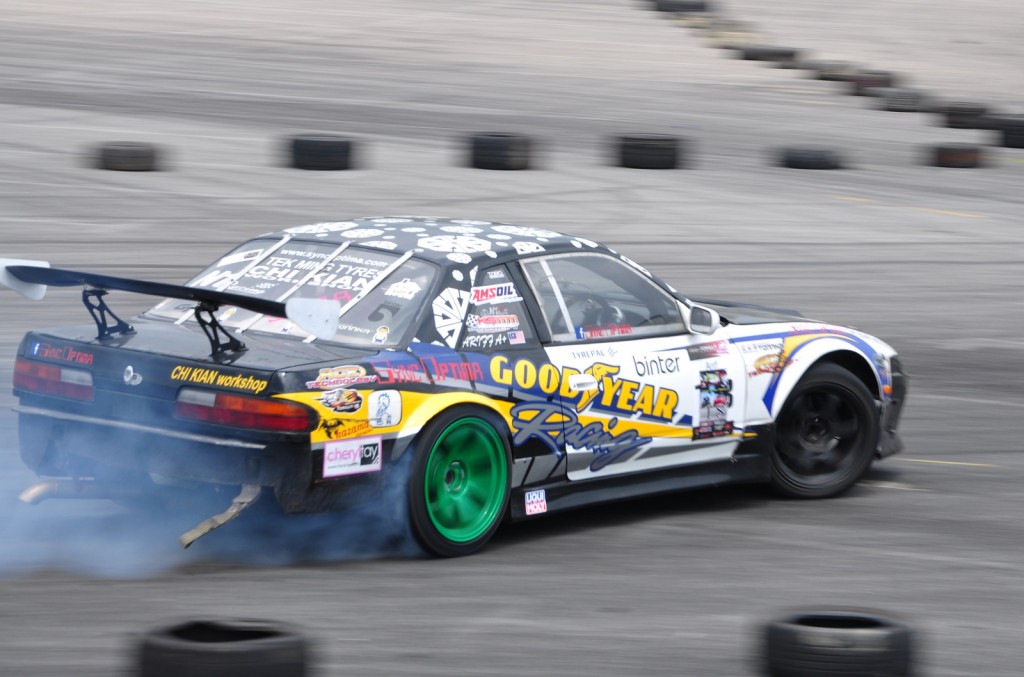 The next day  ,with the clipping points finally being placed we could now begin practice. The session proved to be valueble as a suspected  fault in the  S13 became apparent; Everytime I put the countersteered  into a full lock position,especially while tackling the rear clipping zone, the car would spin!!(hmm FD Singapore 2011??)  After closer inspection , we found that the front wheels were locking up on the castor rods  whenever it was in full lock!! Thankfully we had wider spacers available and simply slap them on and there were no more spins. 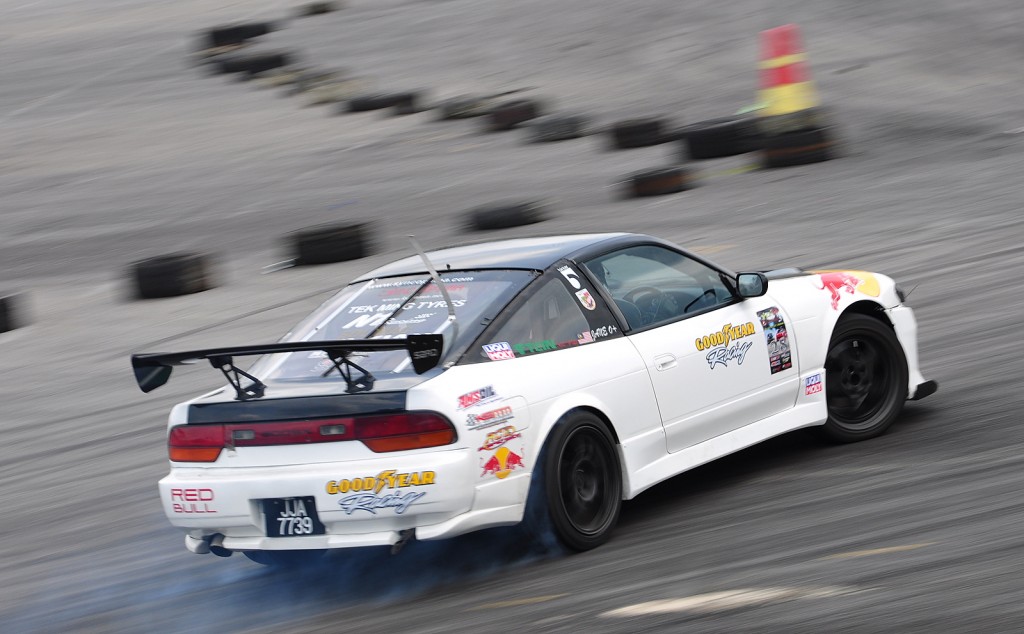 Jane , thankfully, had no more gearbox issues and were able to churn out a string on solid runs during her practice!! 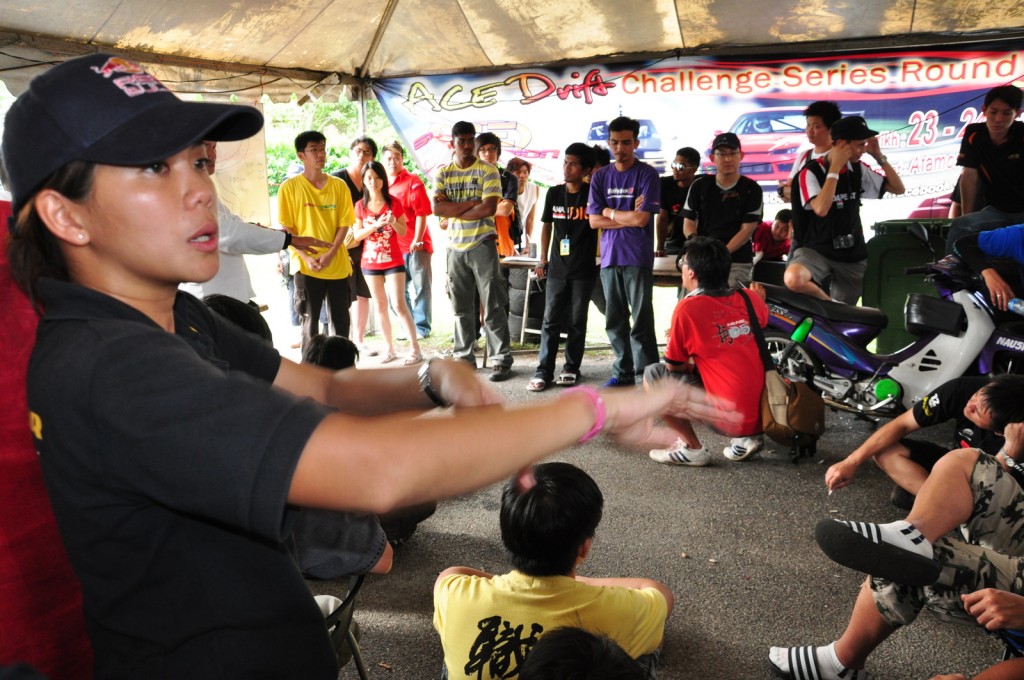 Qualifying had Jane in 13th place with me placing 1st into the top 32!!

Unfortunately for Jane as shewas knocked out in the Best 24 tsuiso battle due to her excessive worn front tyres which had her plowing through in understeer into the first turn for both runs. 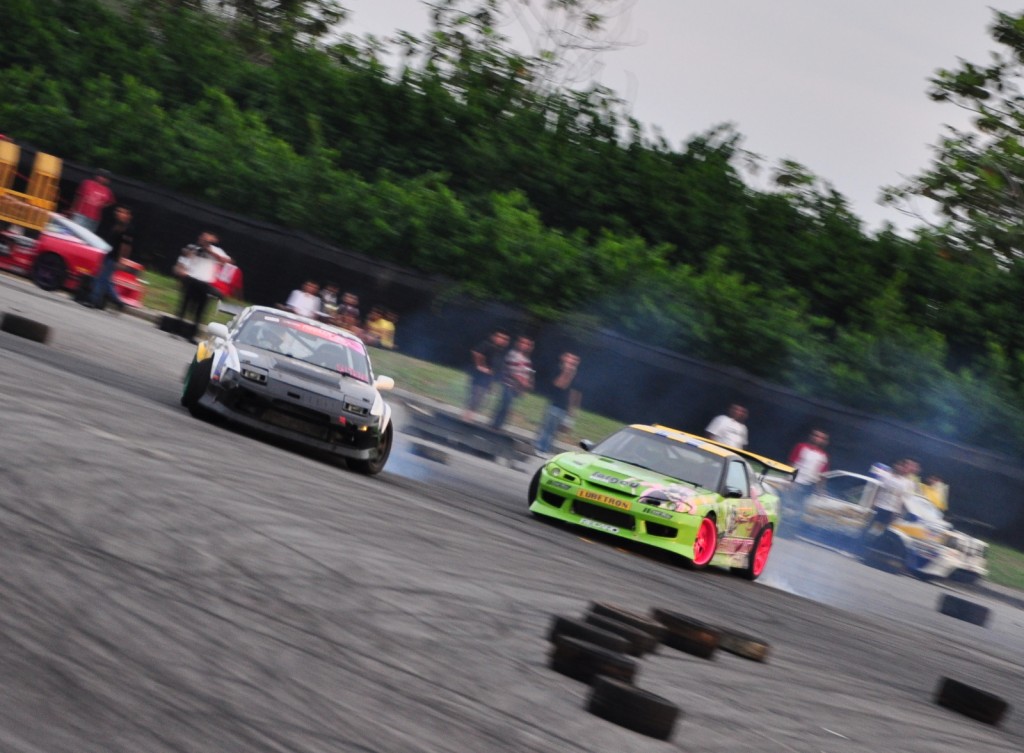 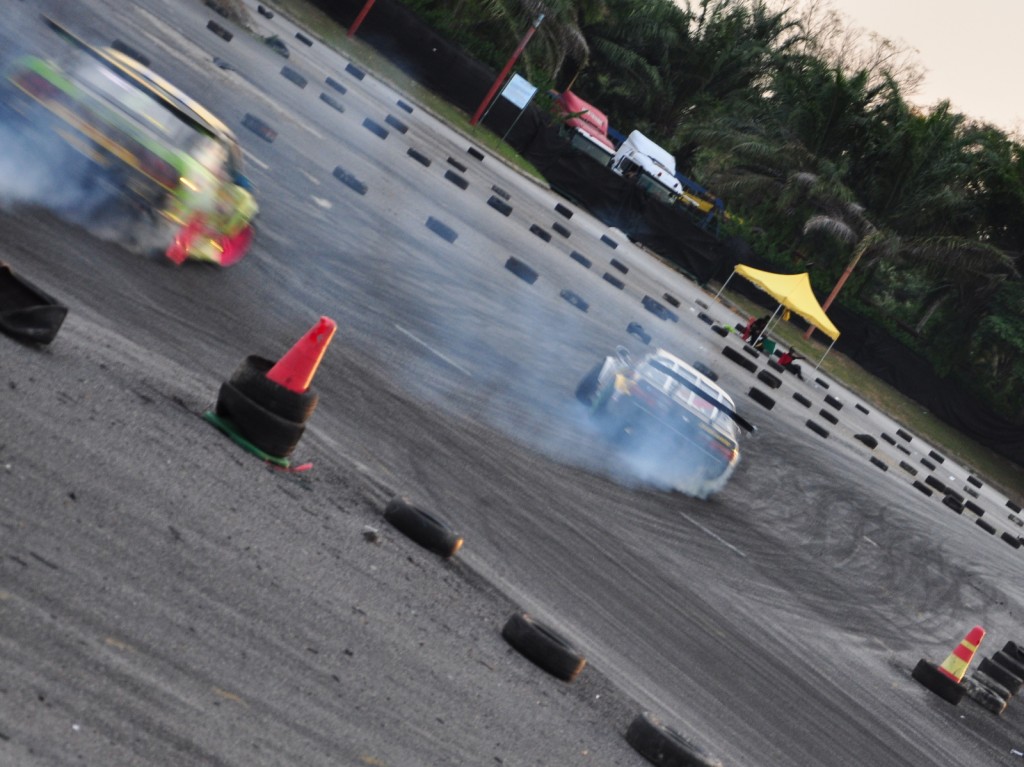 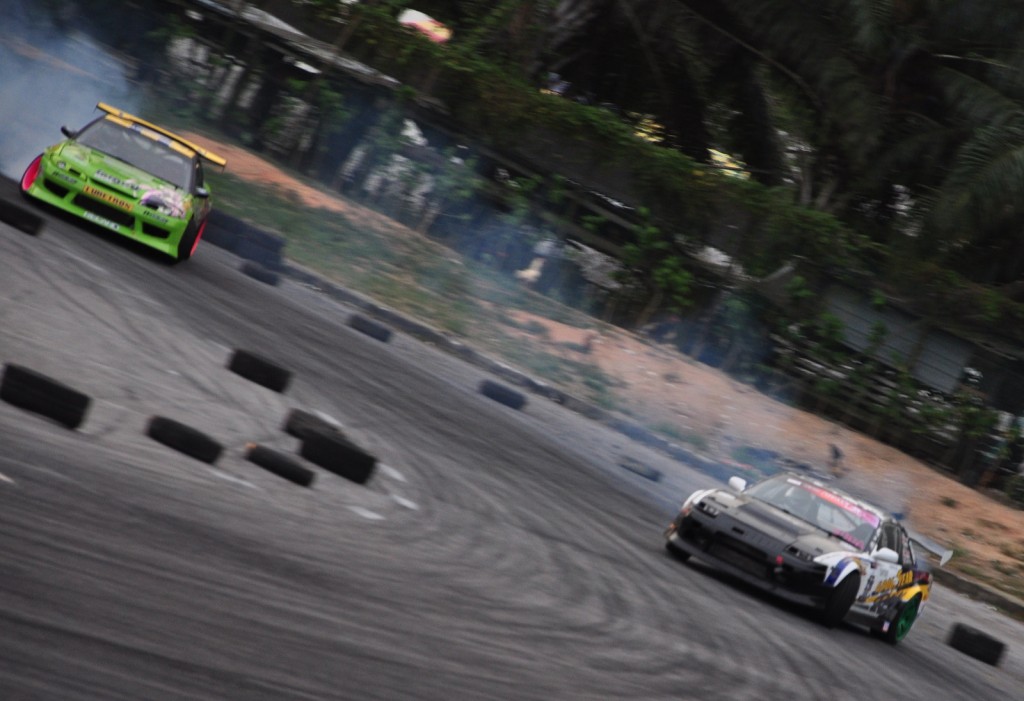 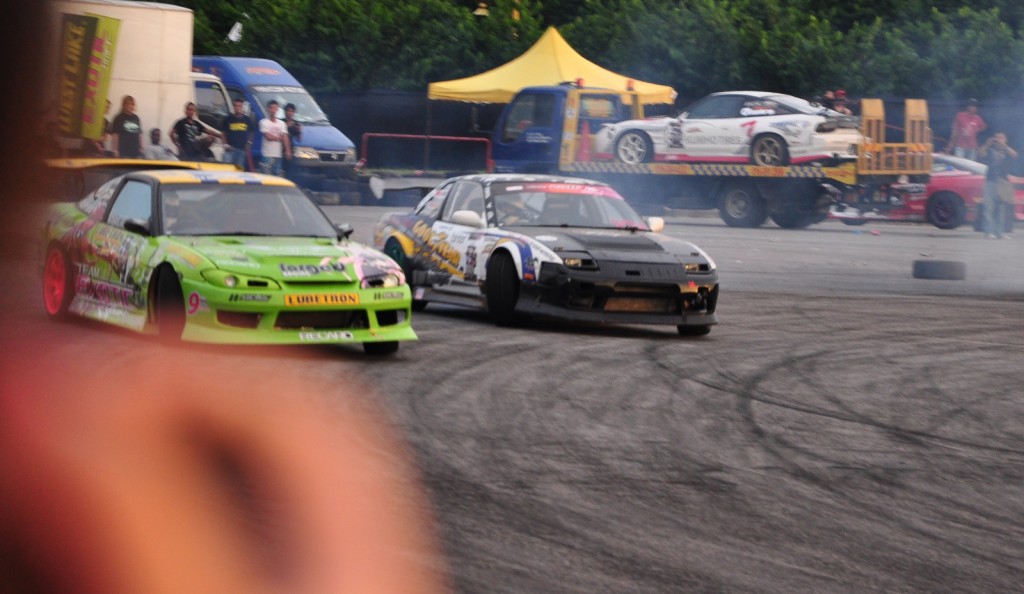 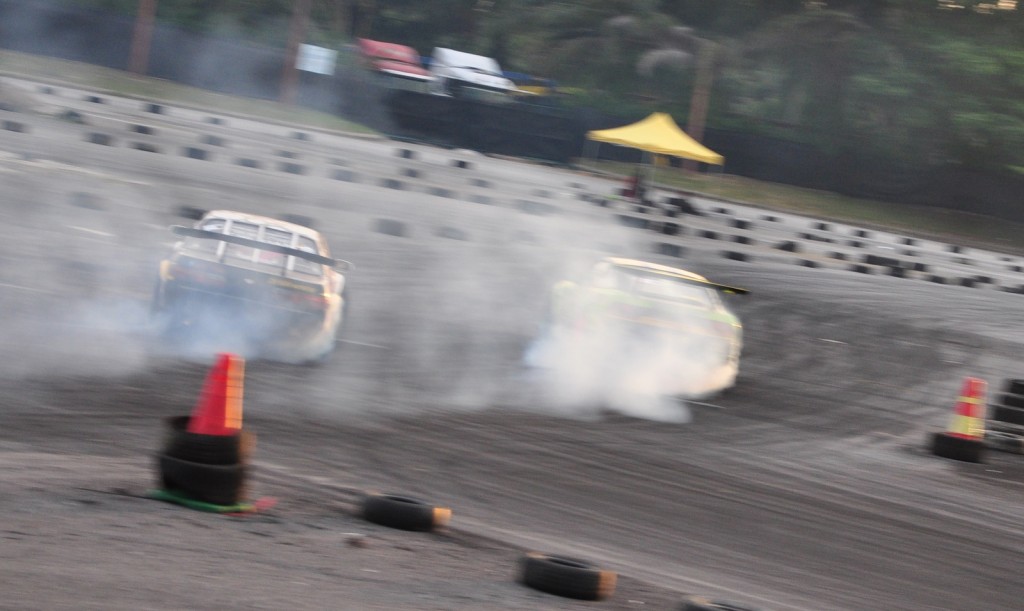 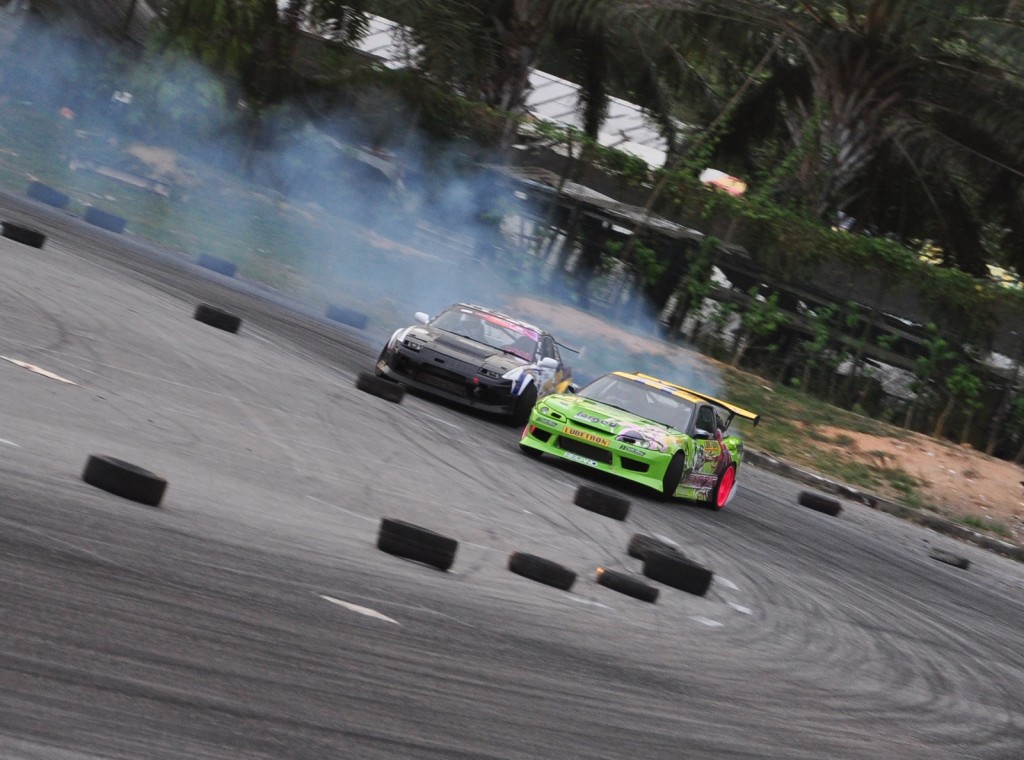 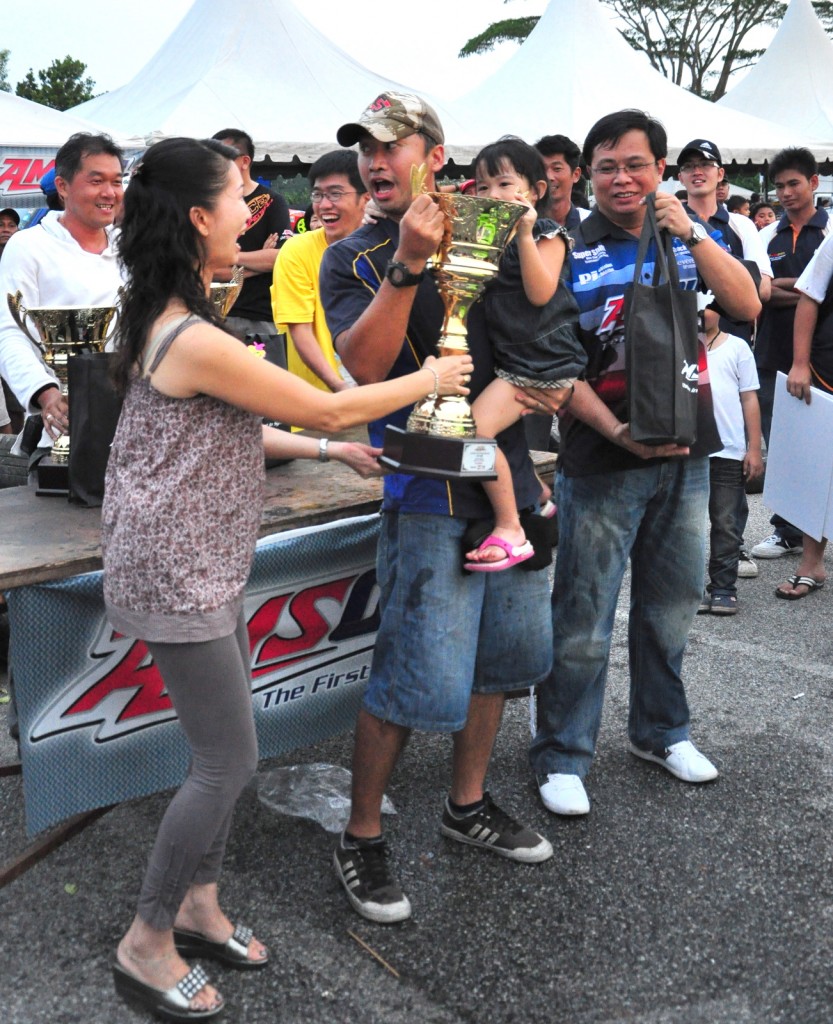 A cool huge  throphy was give to me for qualifying first!! 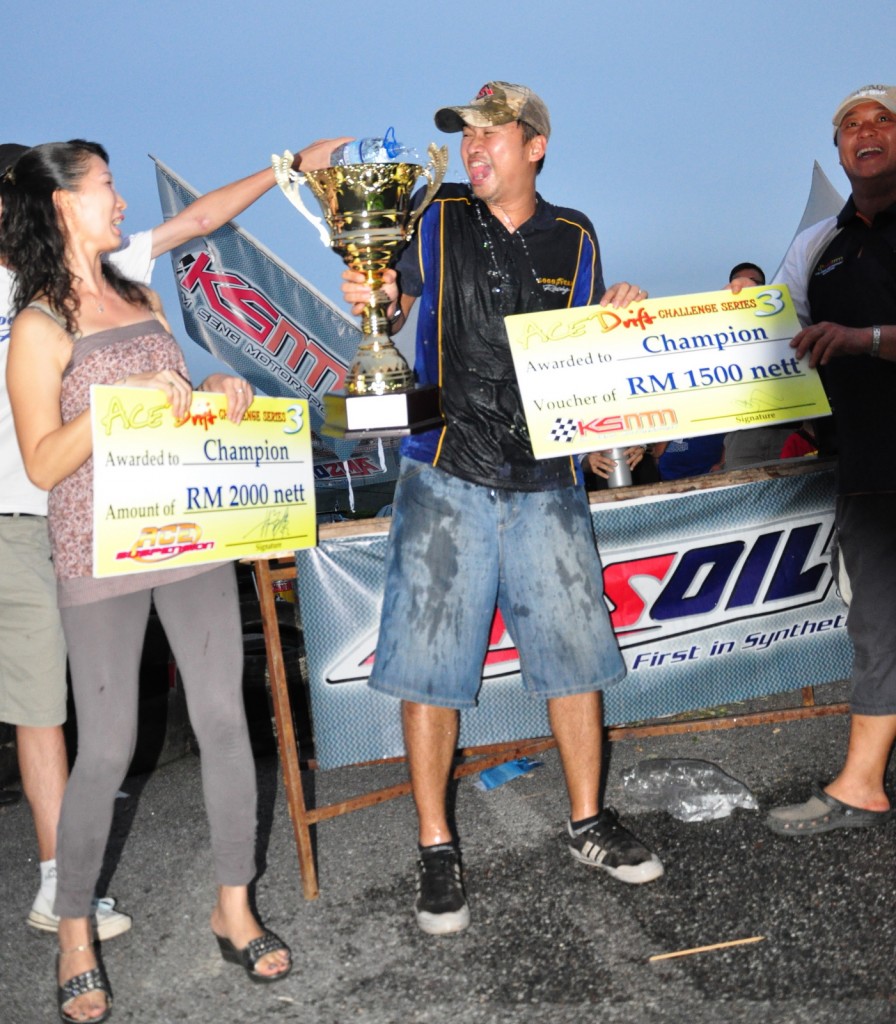 and another throphy for winning round 3 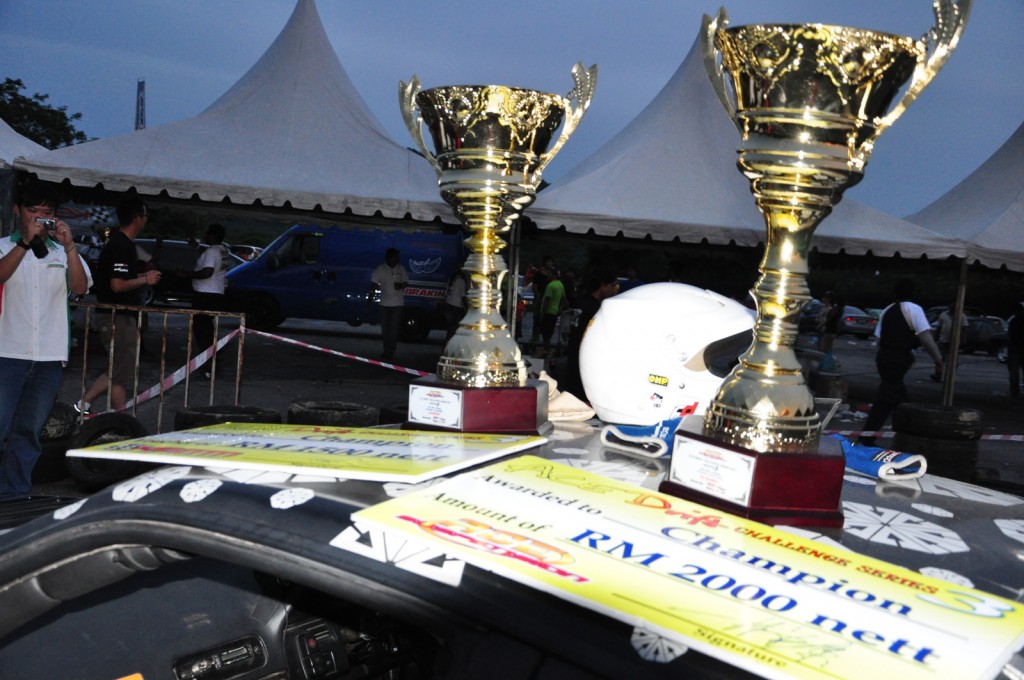 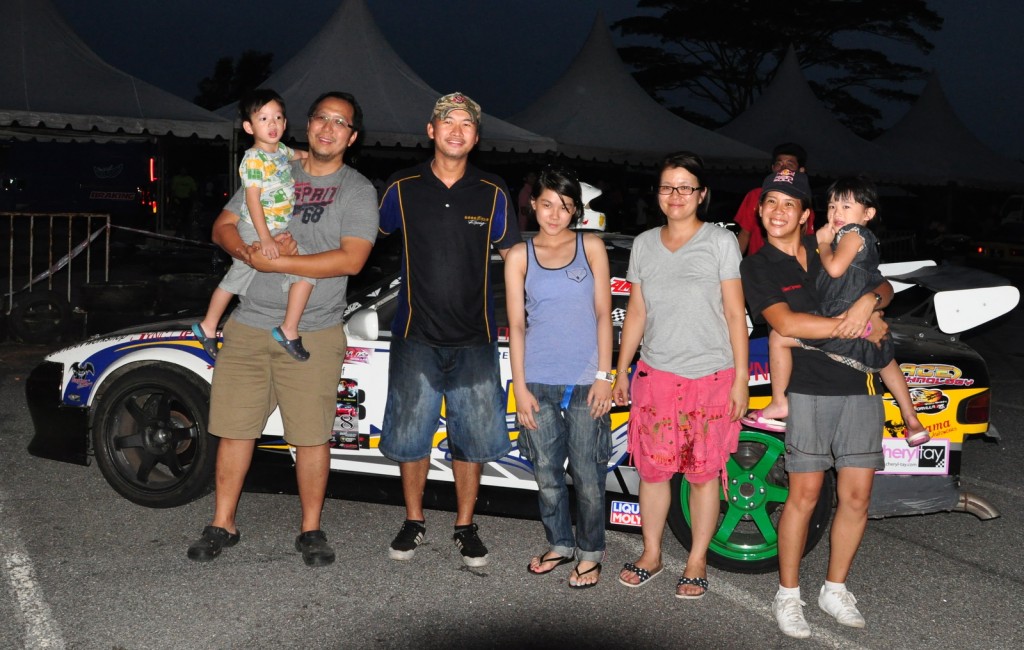 My sister inlaw ( Jane’s sister) and family were there for the weekend too!! 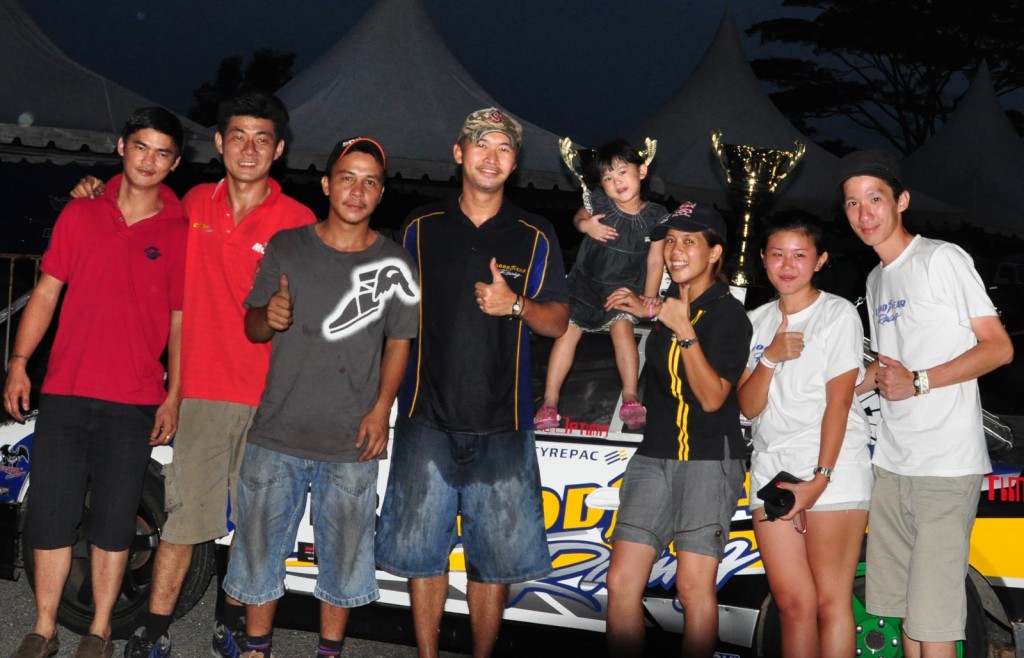 Many thanks to The Team: ( L-R) Voon: Our martial art expert , Kian: Head mechanic who managed to fix everything in a jiffy , Boy: mechanic and our “mat-guard-loh, me, Johanna : our daughter and human water shield, Jane, Cheryl: our video camera lady and babysitter and Mike: my spotter and CIMB representitive!!