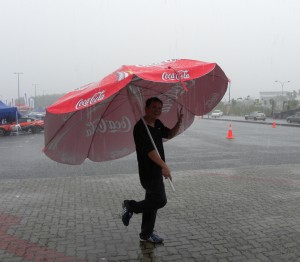 Its one thing to report  news inaccurately but its another when you begin to put words into the interviewee’s mouth.This is what happen to Jane recently; a reporter from a renown and respectable newspaper, was at the MMU’s Autoshow /DCM drift challenge in Malacca last weekend and and did an  interviewed and took some pictures of Jane. As everyone knows towards the end of qualifying, it started to rain extremely heavily, our budding reporter friend assumed that the event was canceled and decided to do some creative journalism and imagined what Jane’s reaction would be. We contacted the said journalist but he insist it was the editors idea , which doesn’t make sense as which editor would want  inaccurate news to  be published under his care??..The best of all, the journalist even said something along the line of ” You should be happy what?..there’s a whole article on you” Hahahahahha ..Thats the  Malaysian Press for you