In conjunction with Cyberjaya’s twelve year anniversary , a drift contest organised by Comma motorsport was held at the Cyberjaya Community club on last Saturday.This event was managed by Drift Art which is spear headed by Fyrus , Idris and Oan . Cheaka and I had missed their  last two sessions held there , so we thought that we had better arrive early (11.50 am to be exact) for the 3.30 pm free running prior to the official practice and qualifying to familiarized ourselves to it. We promptly went about setting up our pit as soon as we found a suitable spot and went about inspecting the course. Unlike any other tracks that we had competed in, the Community club course consist of a very short straight followed by a wide long corner which leads to a narrow sharp turn followed by a bumpy chicane. This makes it difficult for drifters to be aggressive during tandem battle on the long wide corner as the following car will most likely be cut off by the leading car going  into the narrow hair pin turn causing them to straighten.

Due to  delays, practice only started at 4.30 which resulted in Cheaka  only having  six runs on this totally foreign track  before having to go for her qualifying run. Due to the nature of the course , the Judge for this competition , Yoong from DCM  had set strict standards  for the Expert category where a mere straightening of the car anytime during the qualifying run, results in  drifter receiving  zero points for their run. This  added even  more pressure on  Cheaka. Running on fresh tires rear tires , Jane had trouble adjusting to the  high grip level of her Goodyear Revspecs. She straighten during her first qualifying run and luck has it ,that even she nailed all the sections of her next run ,she was confused as to where the finishing line was and had stop drifting before the finishing . This  resulted in zeros for both her qualifying run which was a big disappointment to everyone in the team  as the score  certainly does not reflect her drifting level.

I fared a bit better having a few extra runs after having been asked to check the course out prior to the offical practice and gotten a 99 point run  for the first run and a spin of the second run while trying to out do my first attempt.I qualified 2nd highest  . Derek lim qualified 1st as he was more consistent with a 95 and a 99 points run.

The top 16 Tandem  battle for the expert category started at 9 pm with almost all of the lower qualifying drifters ,who were all fairly playing it safe by leaving lots of room between themselves and the leading cars , advancing to the best 8. This trend continued moving on to the next run.Though not as exciting  for the spectators , playing it conservertive was the only way to not get trapped into having your line blocked. My run with Michael Gan went on to a one more time where I made the fatal mistake of being too aggressive while I was trailing which resulted of me straightening when Michael dove into my intended line in the hair pin.  Haiyaa….Anyway, Michael Gan was consistent through out the event and deserved the win.

Photos from that day… 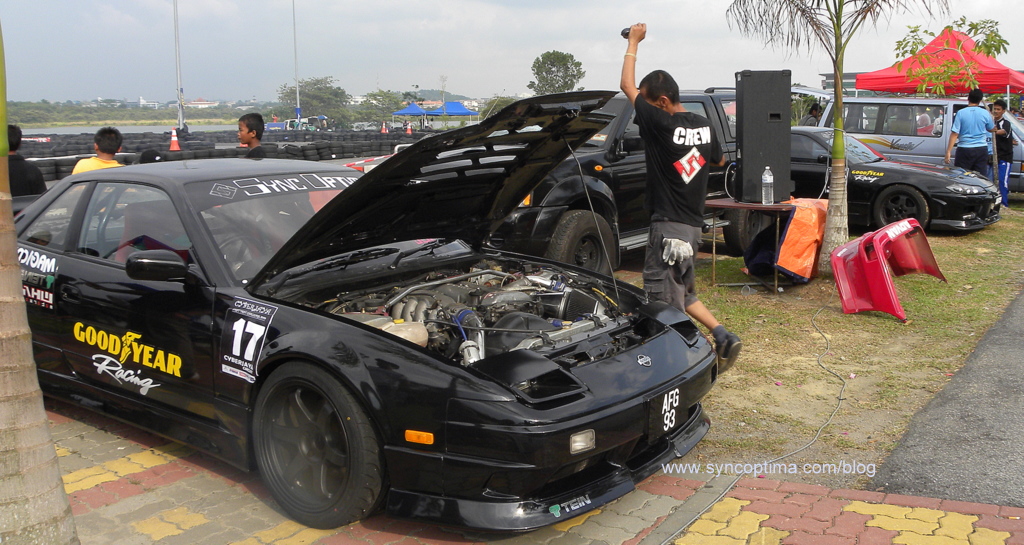 Our little spot by the track which we used as our pit.. 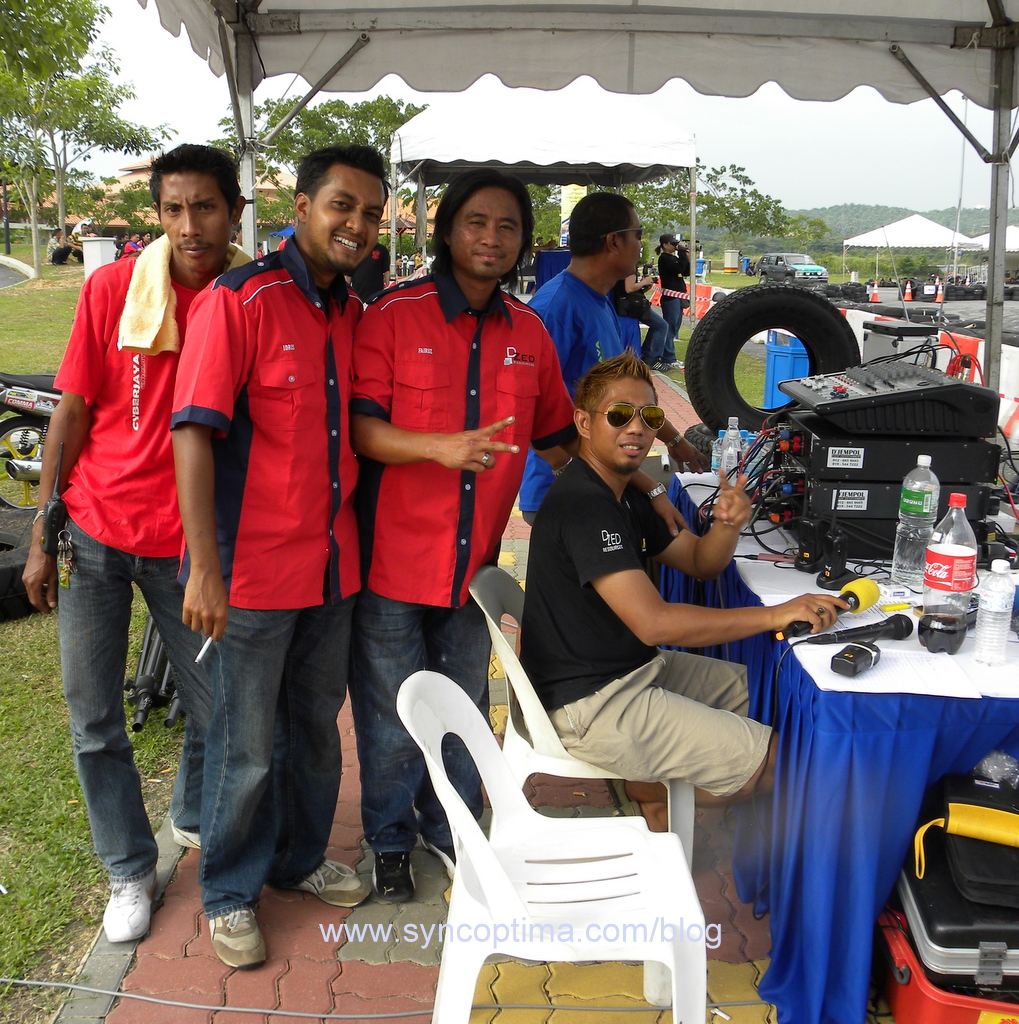 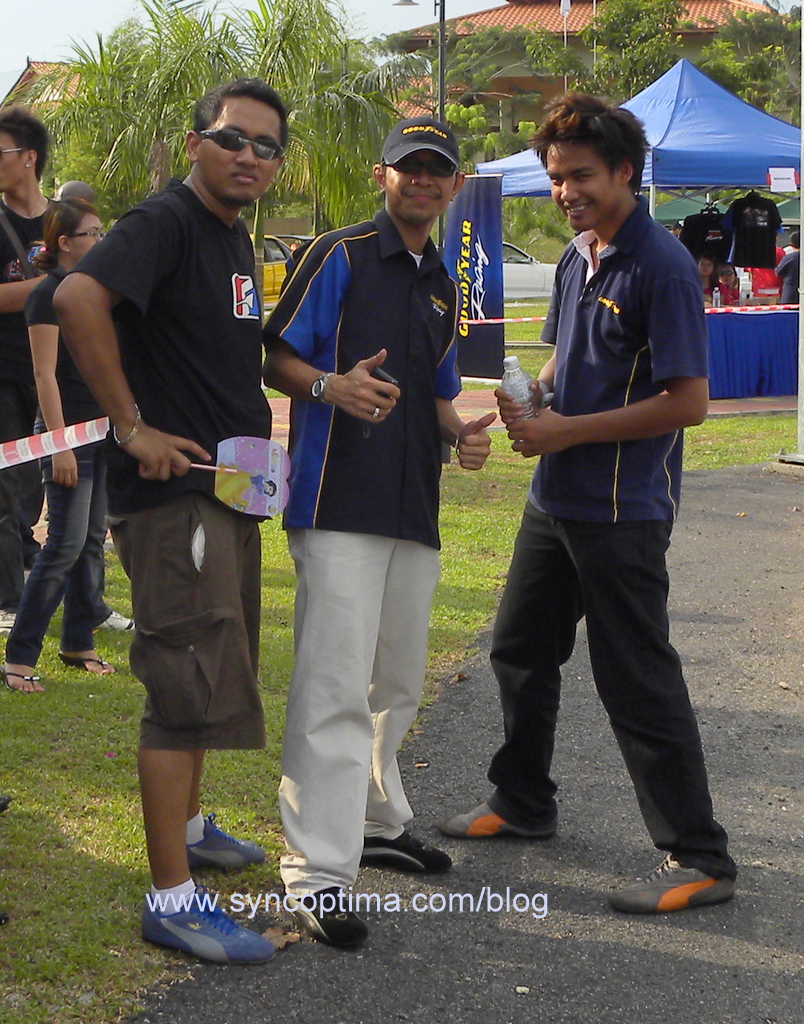 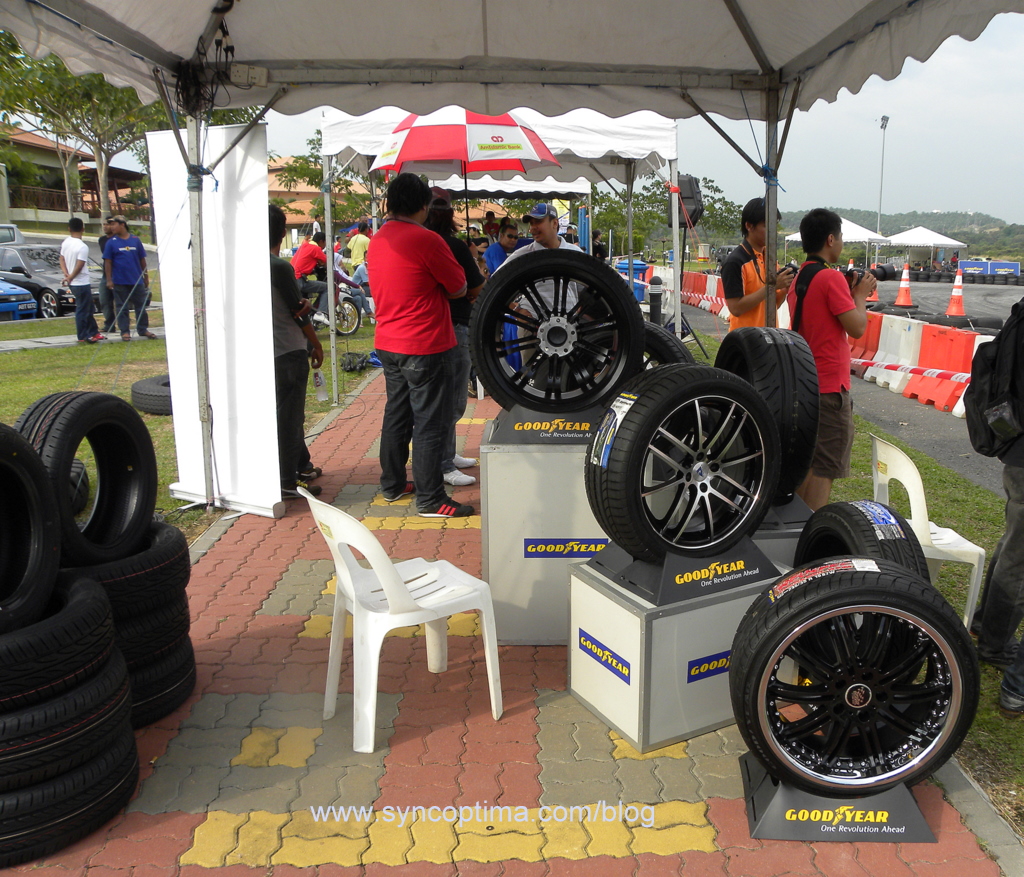 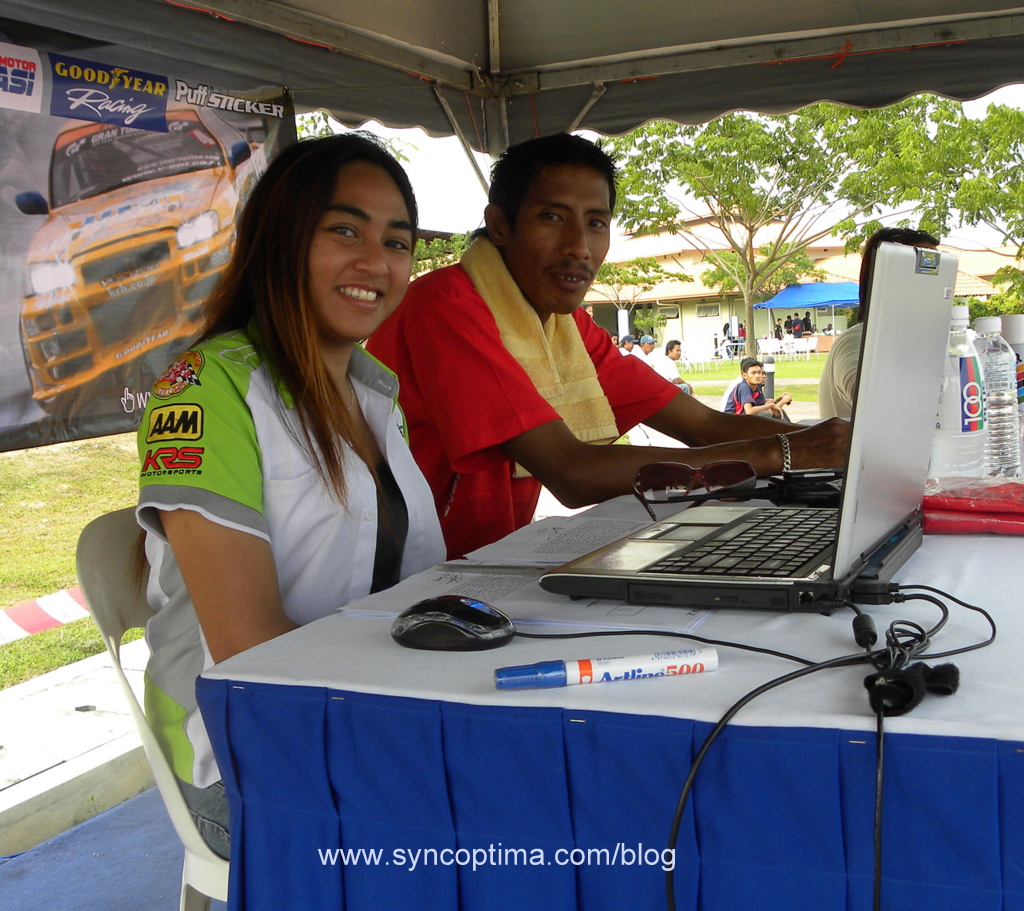 Ja Ja from Comma Motorsport with a friend.. 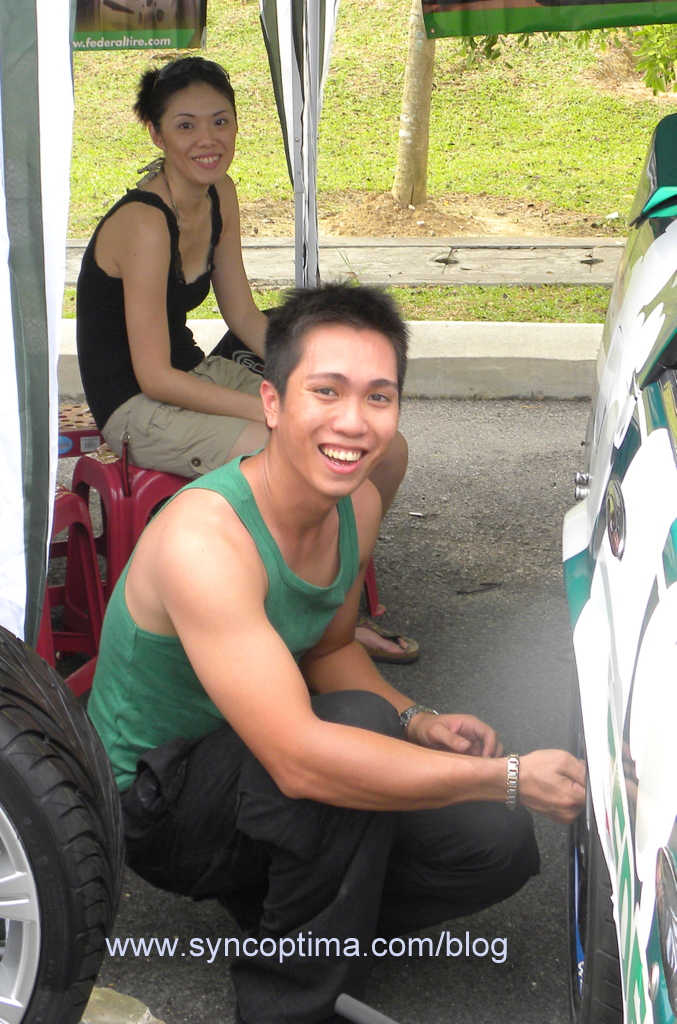 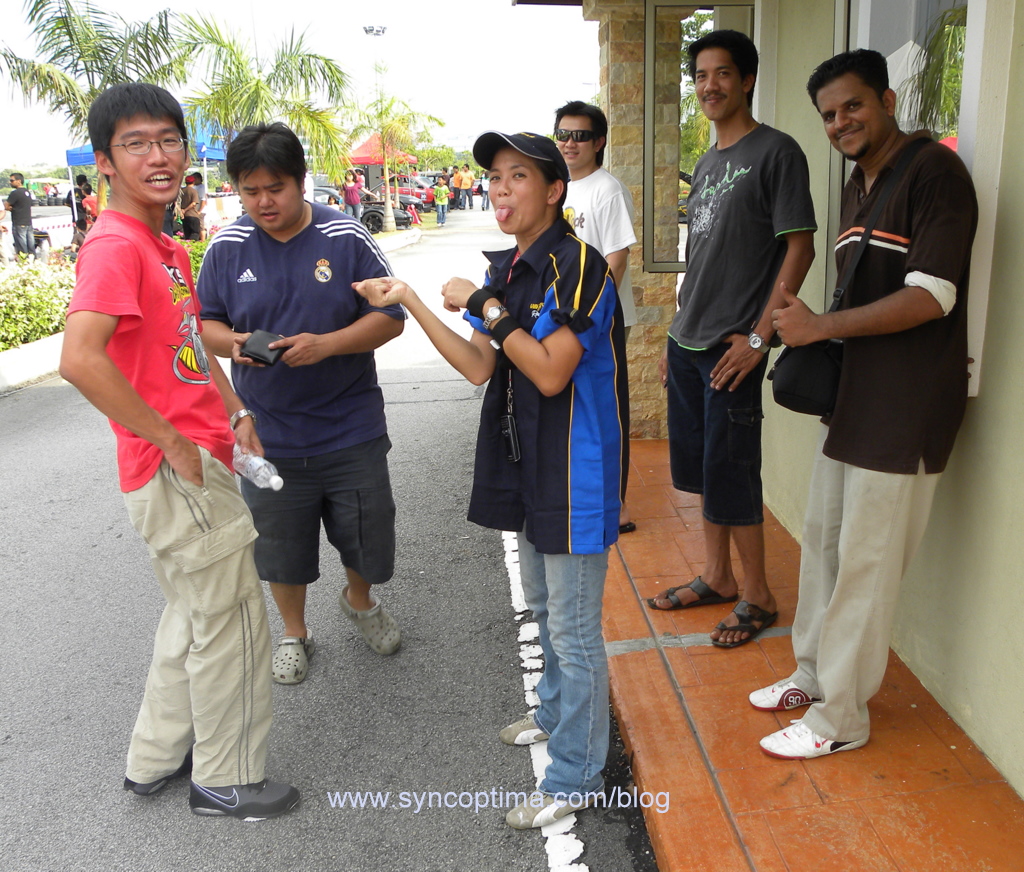 Trying to fill up the pocket of the Judge of the day , Yoong ( Red t shirt) 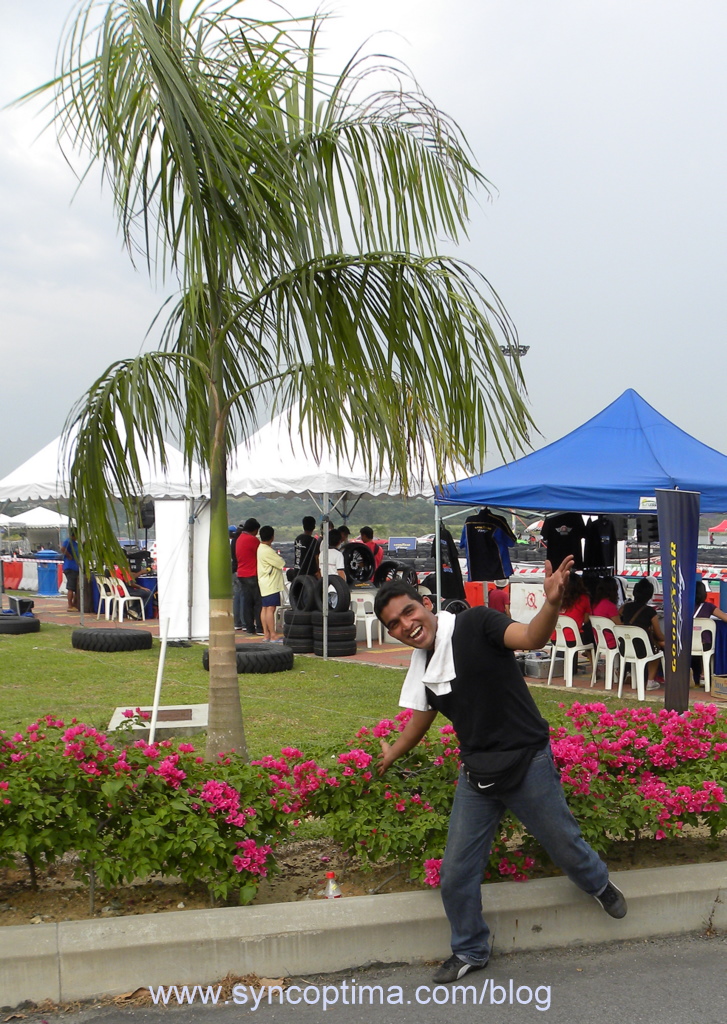 Someone posted a video of  the making of a Bollywood Drifting movie which got Burn all excited..seen here Burn singing and dancing in Hindi

Drifting action…my apologies, this is all I took 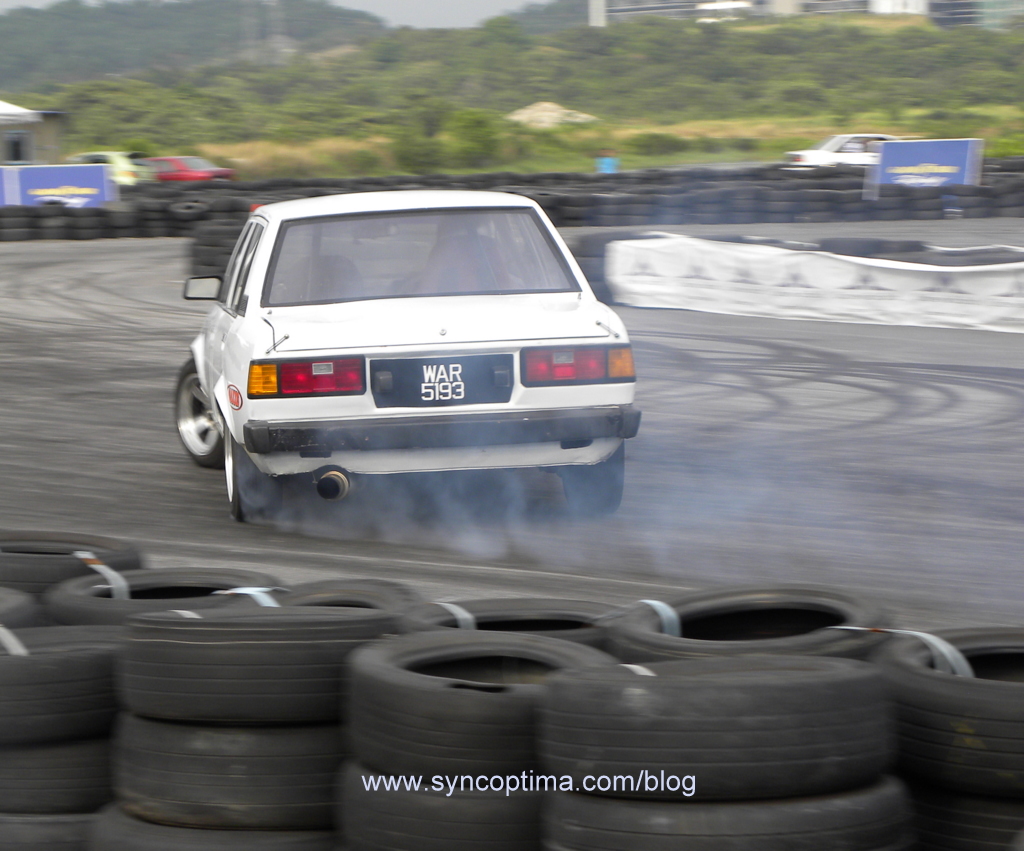 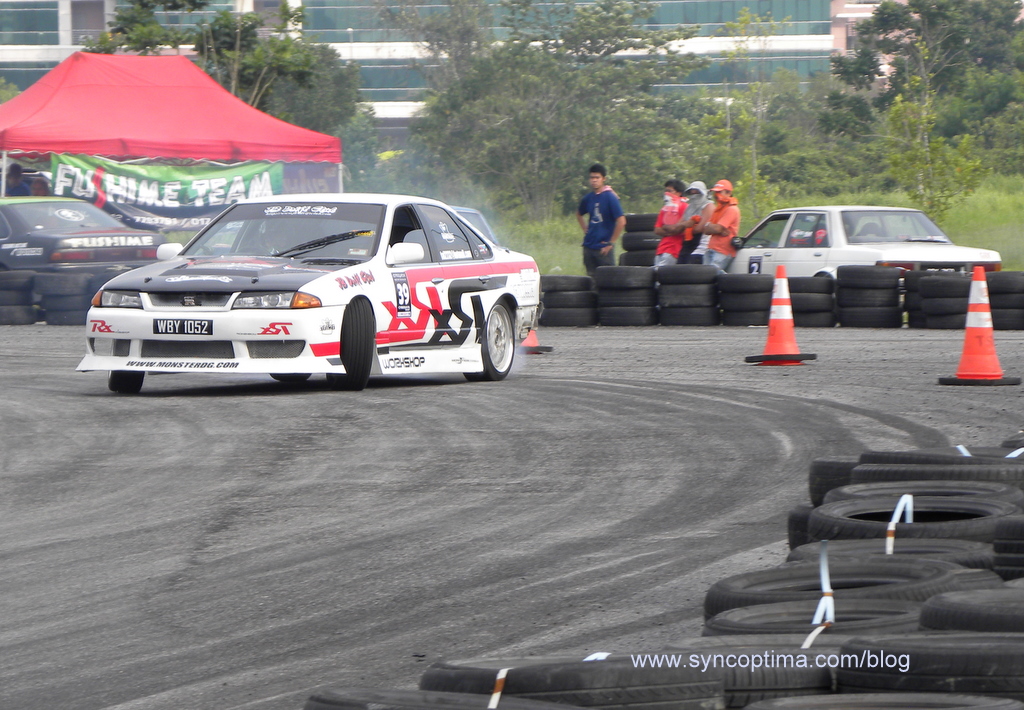 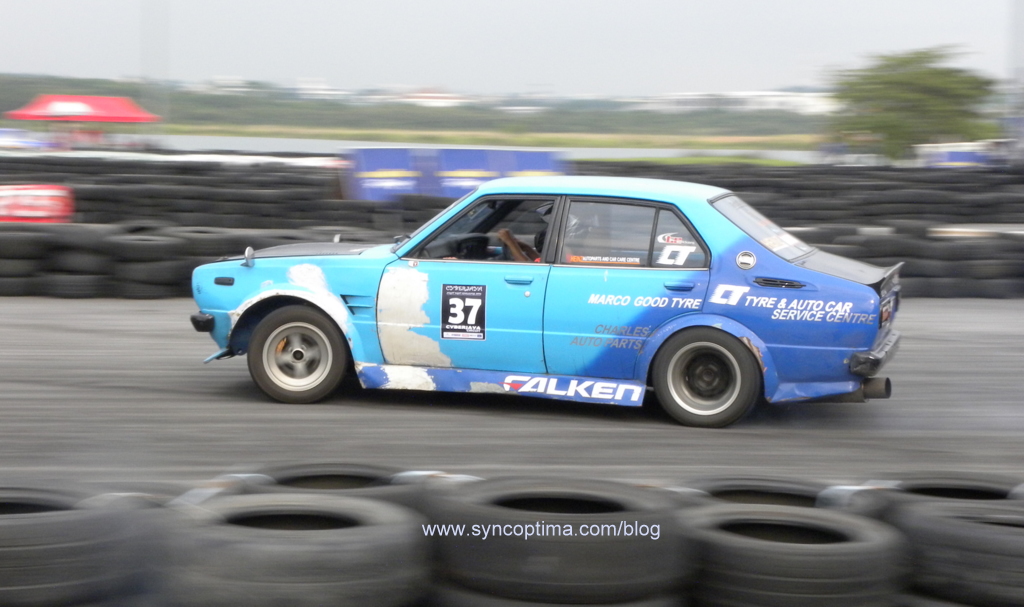 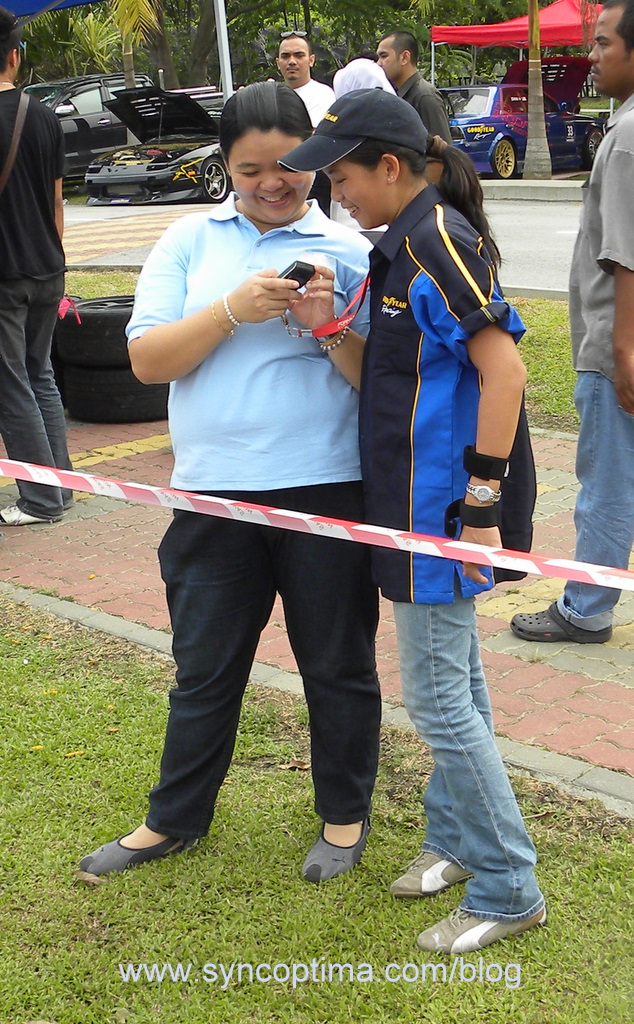 Angeline and Jane sharing photos taken on her mobile phone 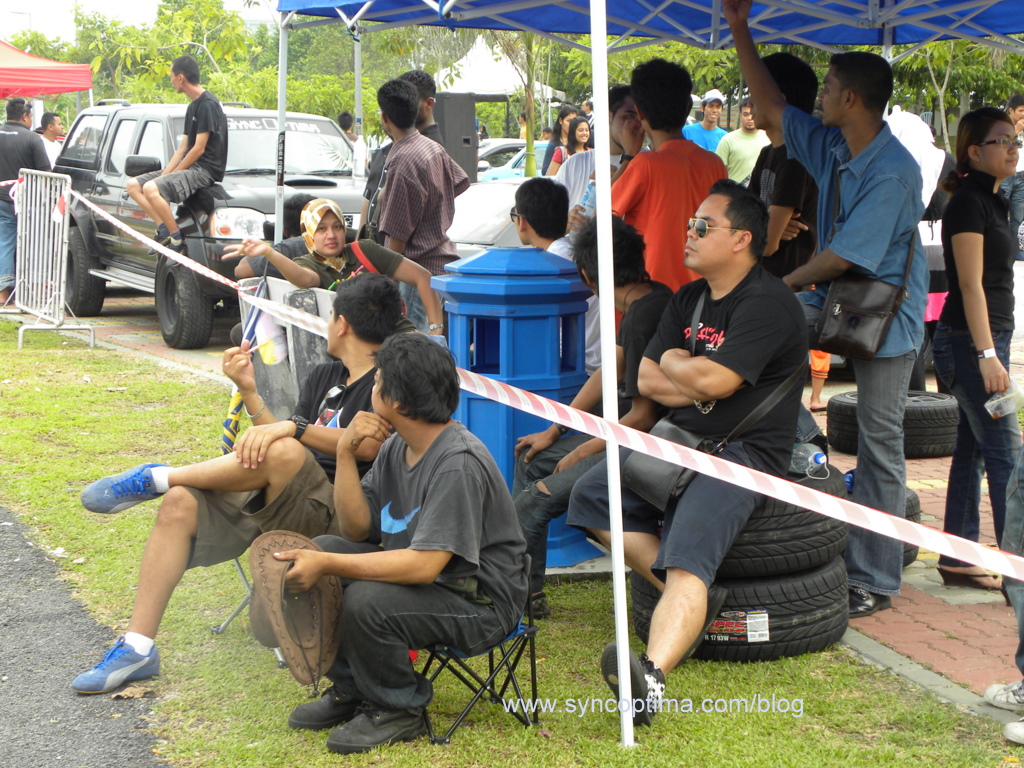 Our tent was really popular that day…:P 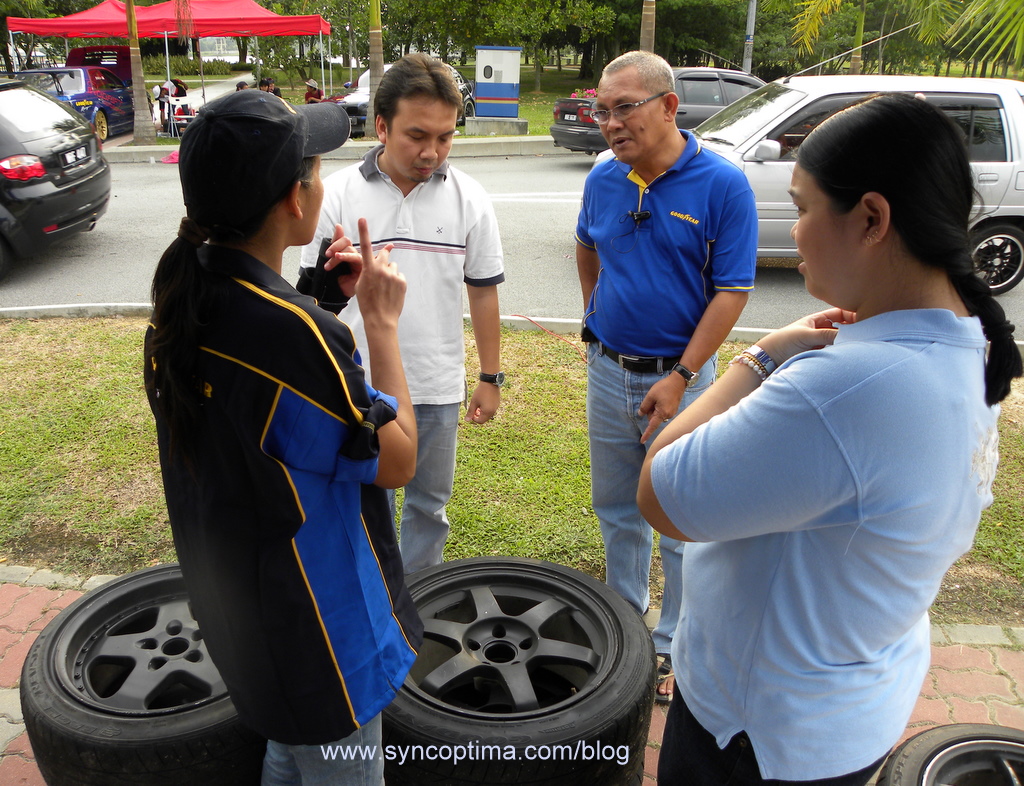 Cheaka, En Zuraiman (Goodyear) , I forgot his name (Goodyear) and Angeline (Goodyear) discussing about tire wear on this particular track 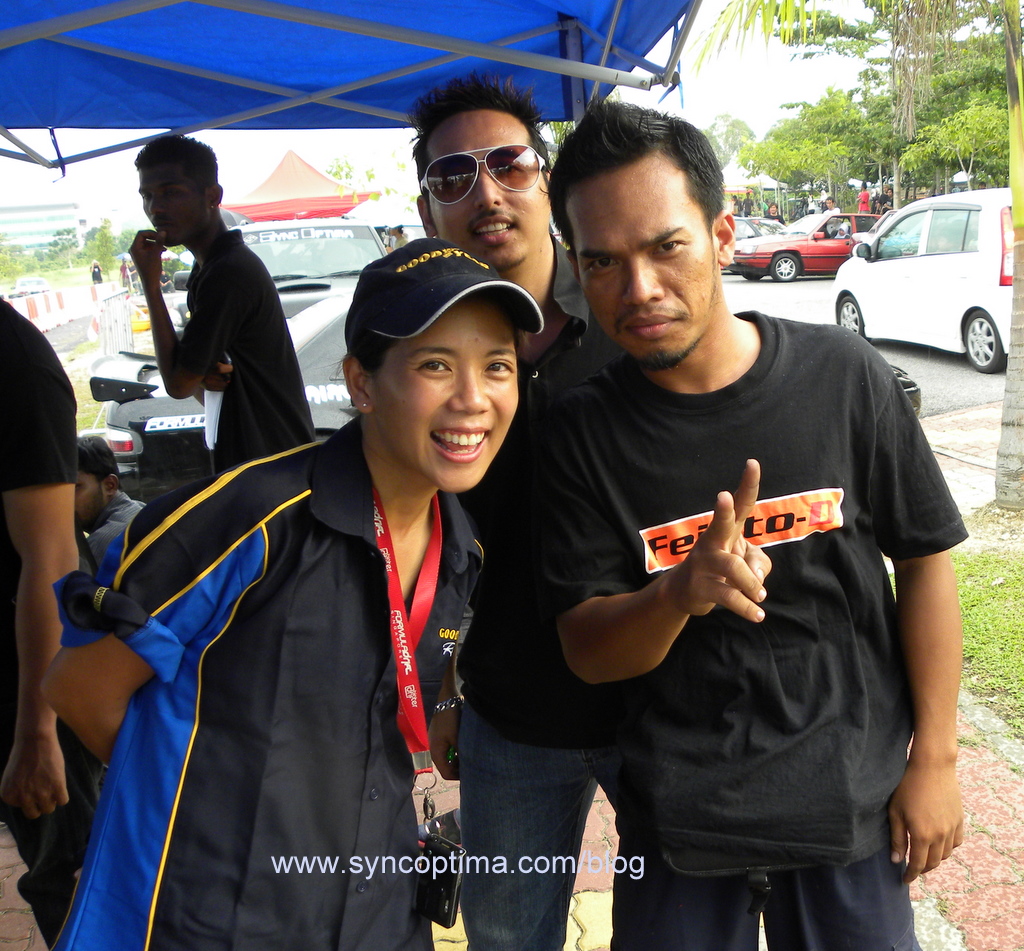 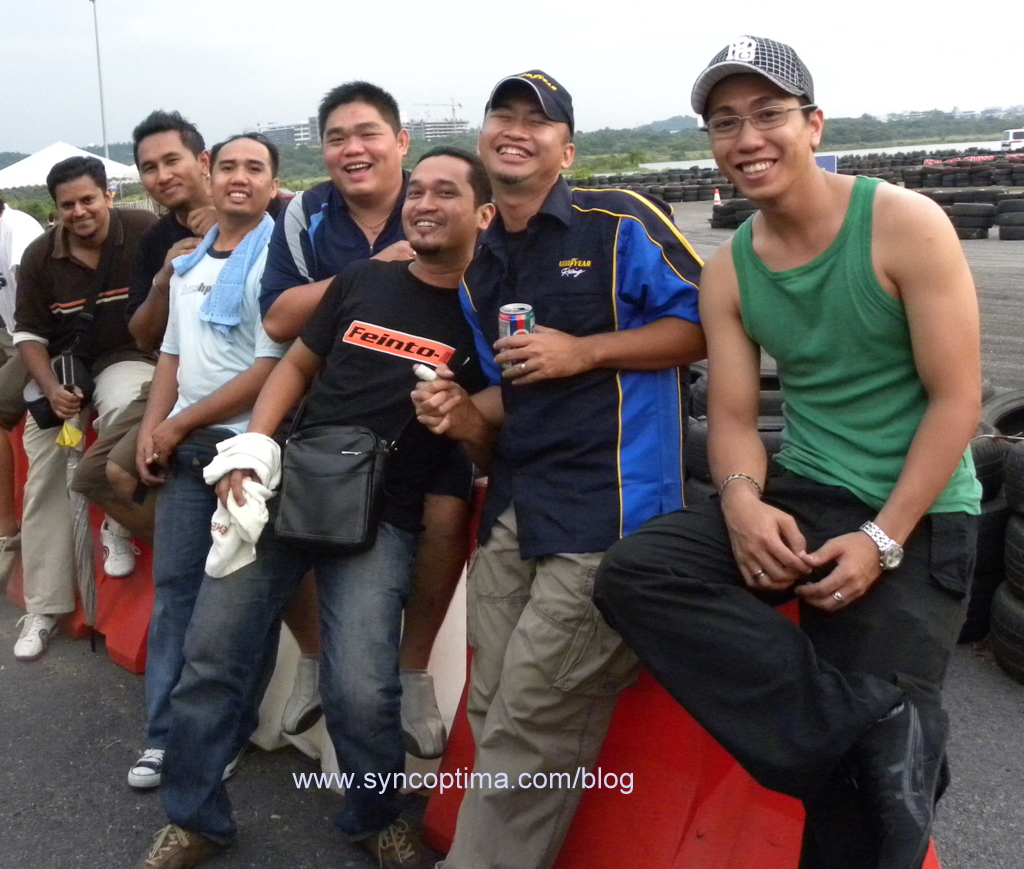 Goofing around before the pre qualifying briefing 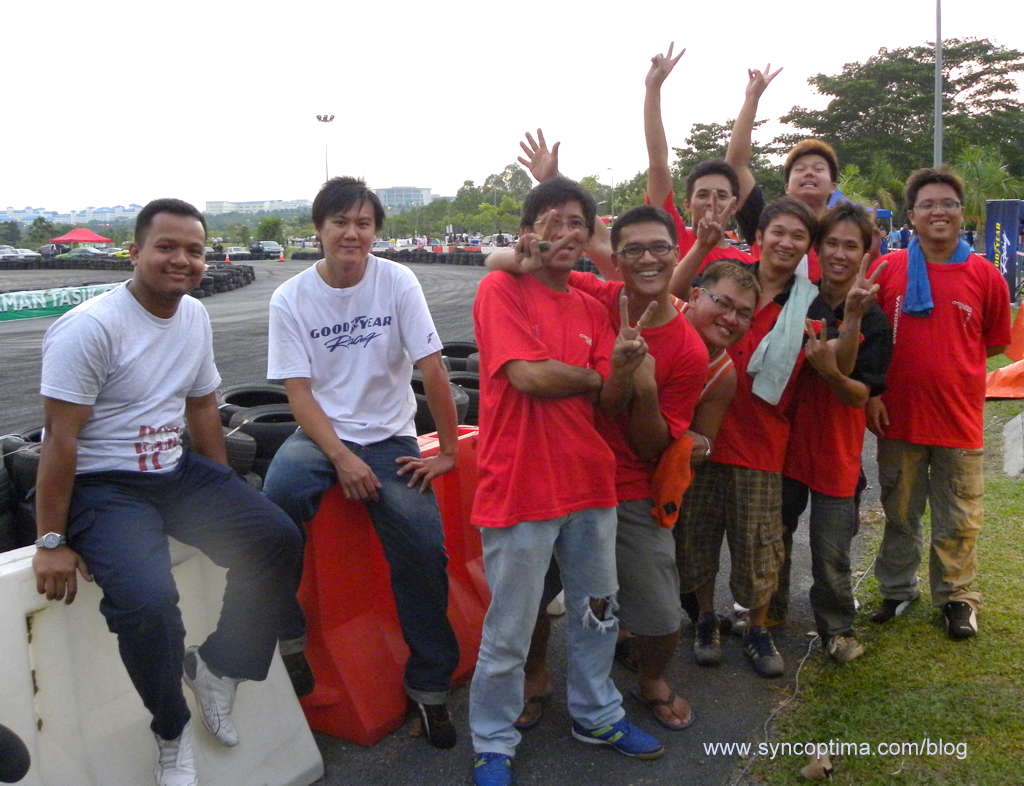 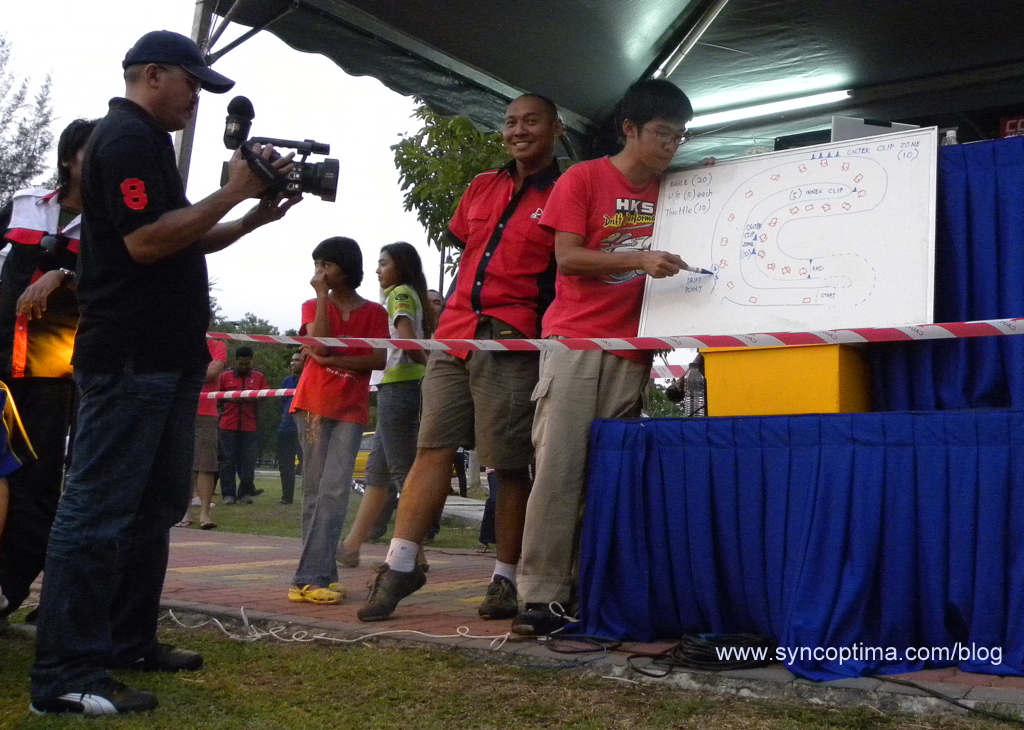 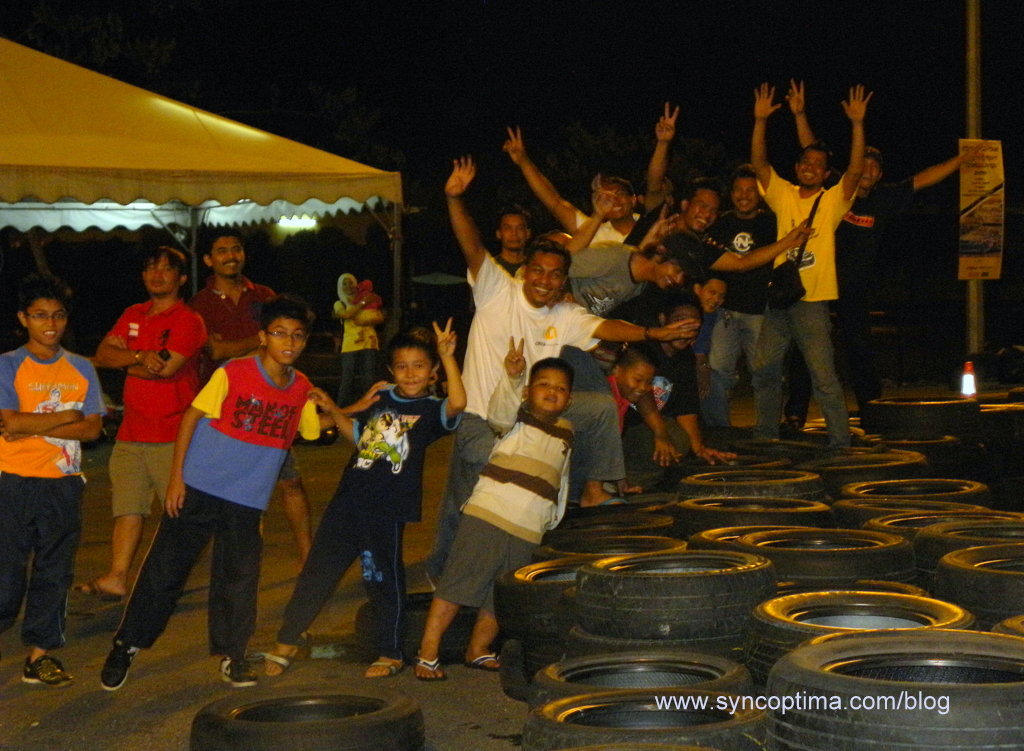 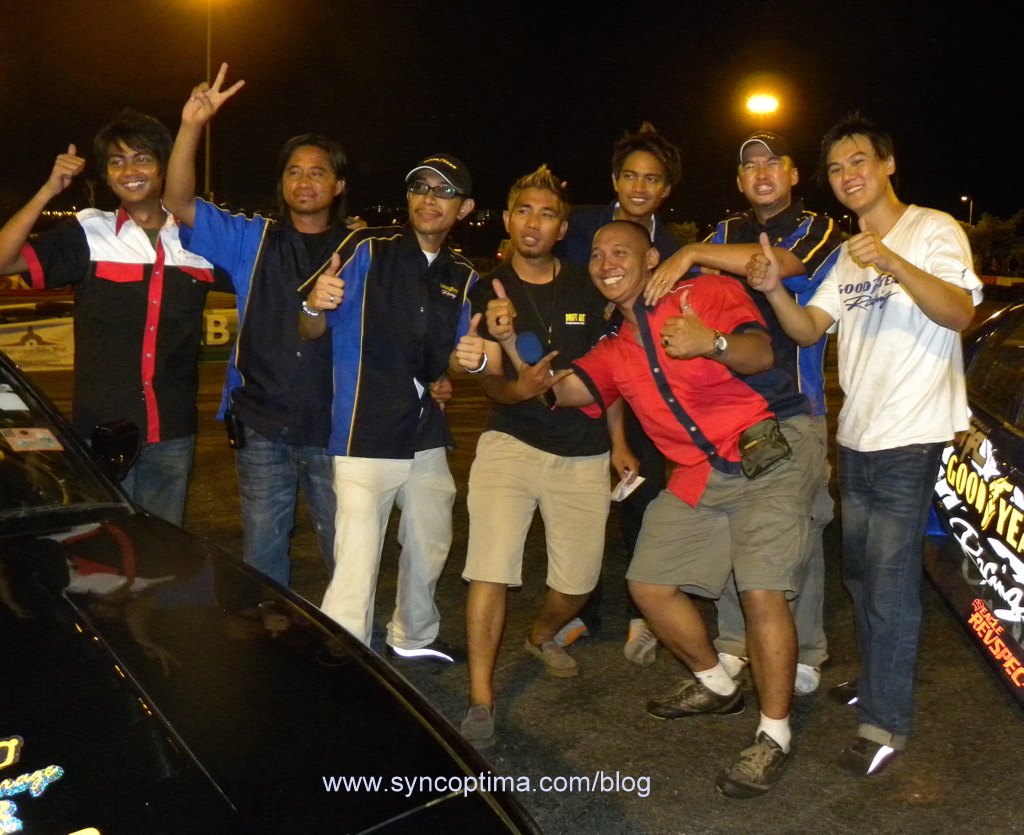 The drifters and organisers 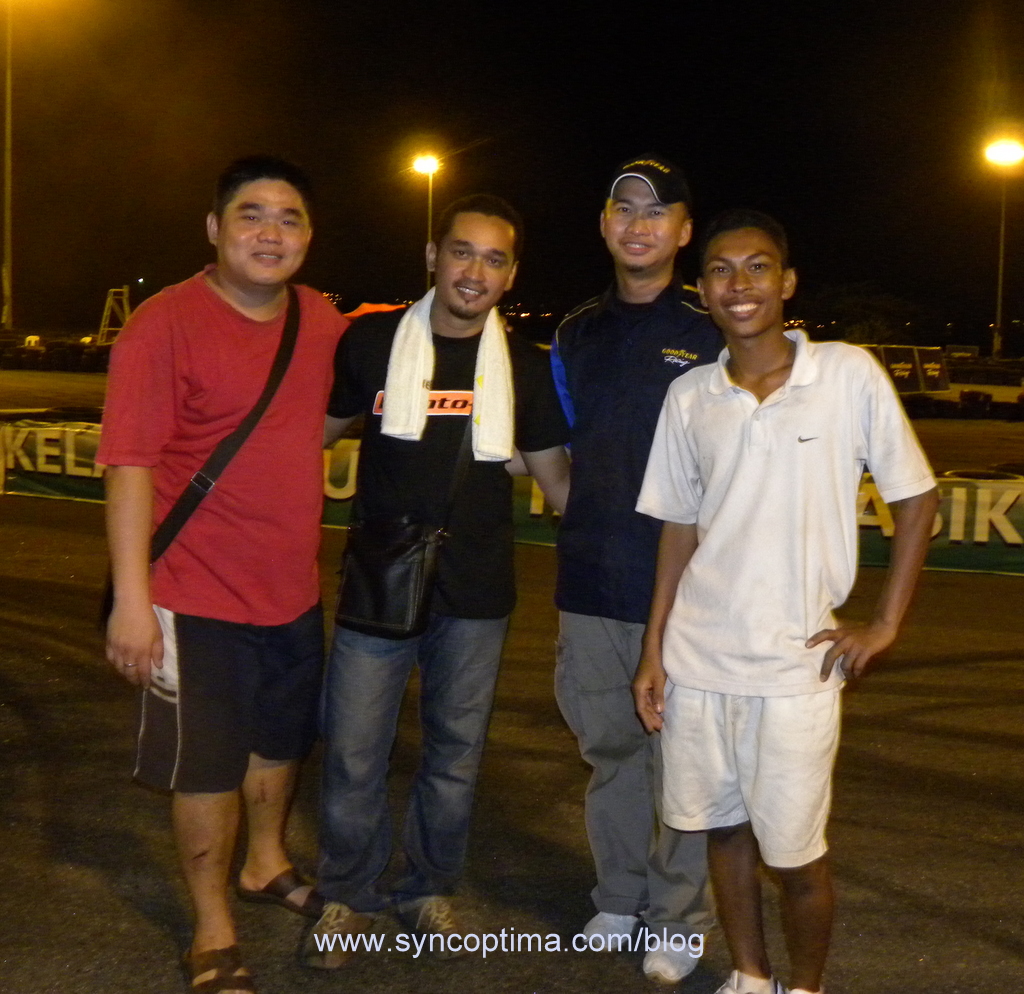 In my book these people were the heros of the day..(L-R) Vincent Lim, the guy who rolled over his car and still managed to fight on till fourth placing.. Johari Mat Salleh , definitely the crowd favourite with his consistency and super fast run…Me, err…not hero laa..and Along Bukit Jalil, this dude beat a ‘ well known’ drifter who was driving a more powerful machine, on shredded rear tyres!! 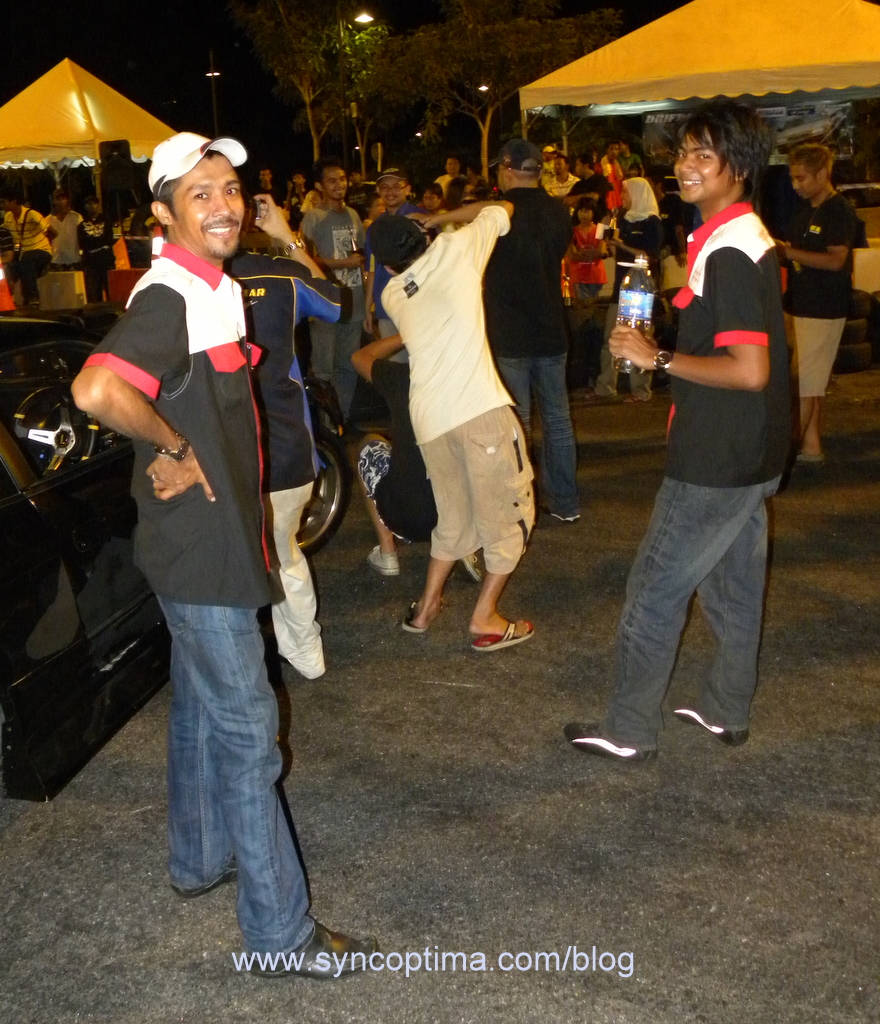 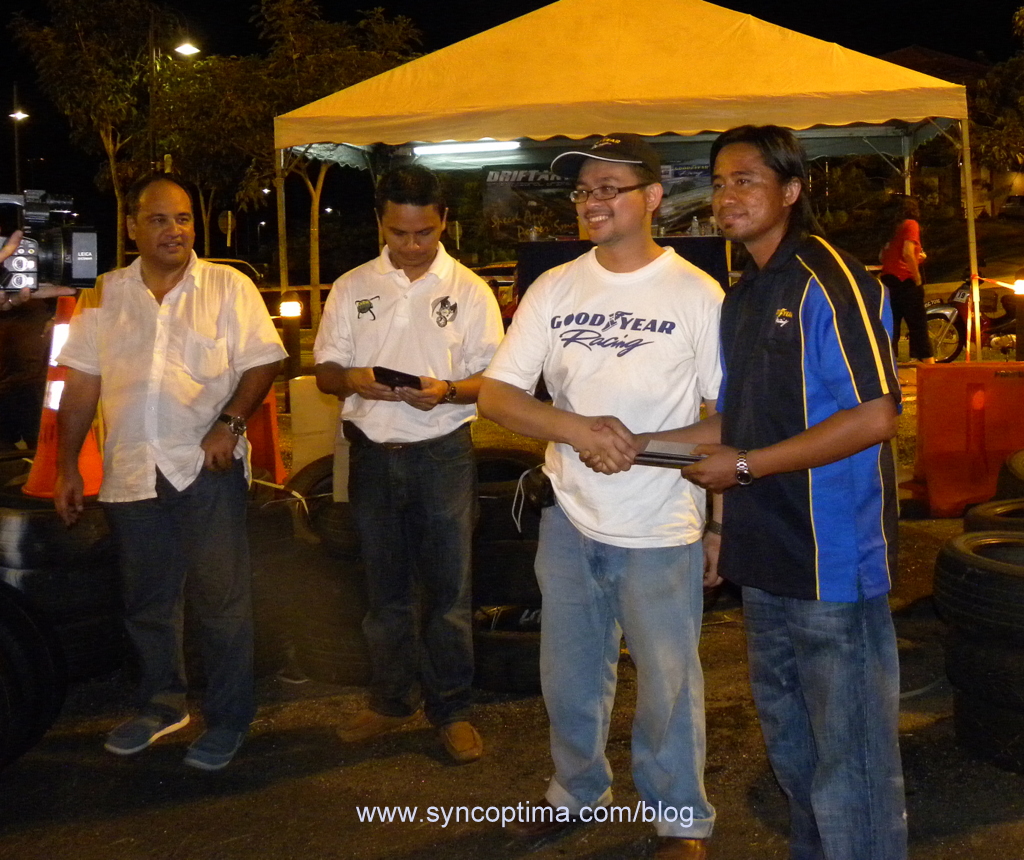 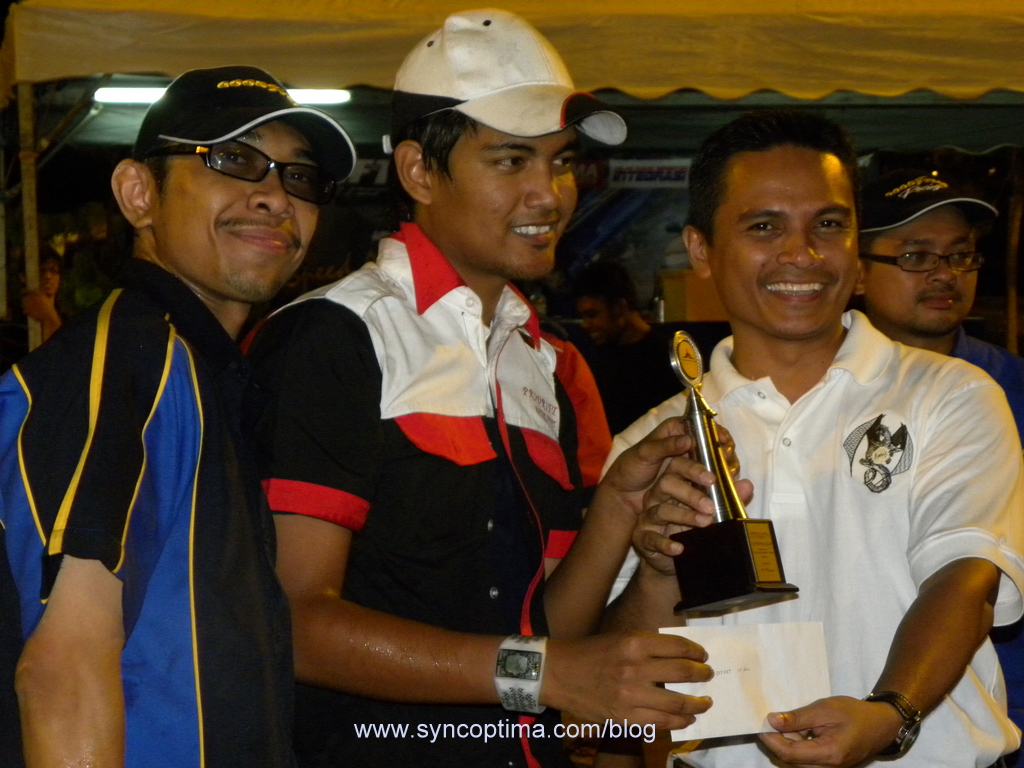 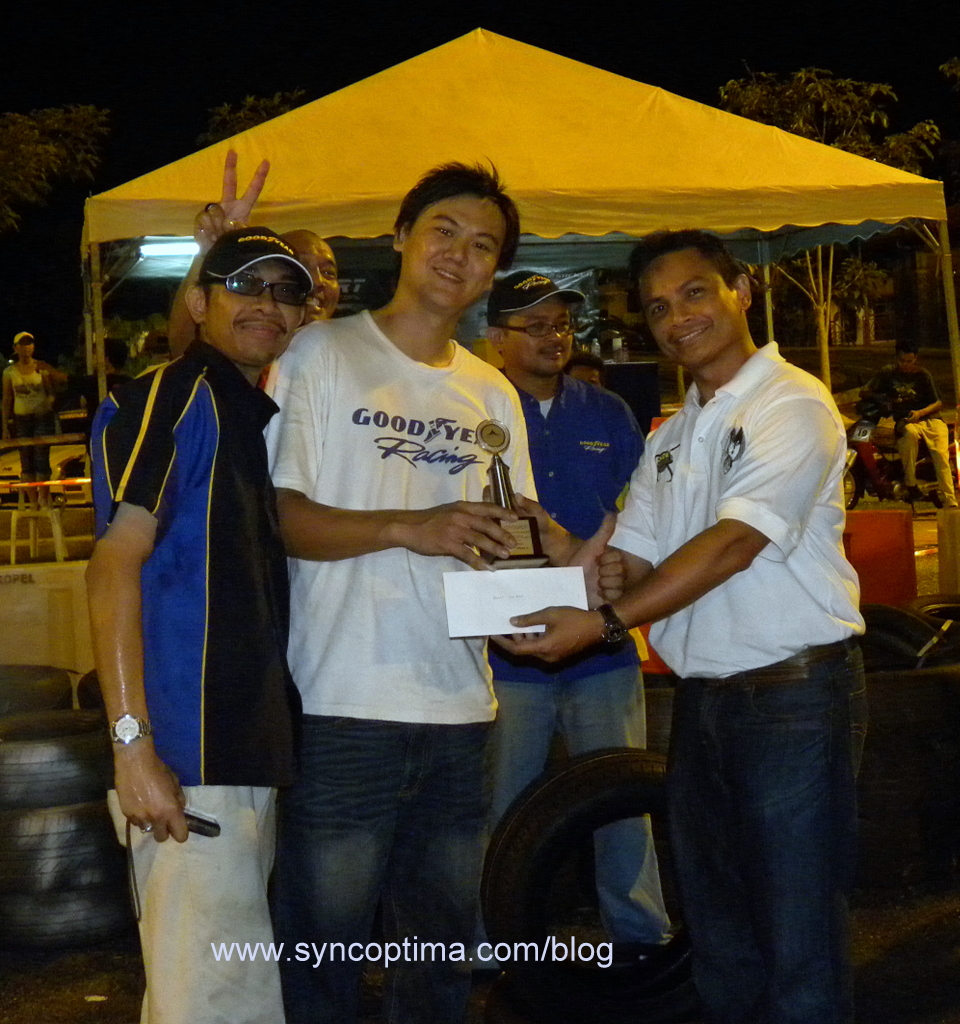 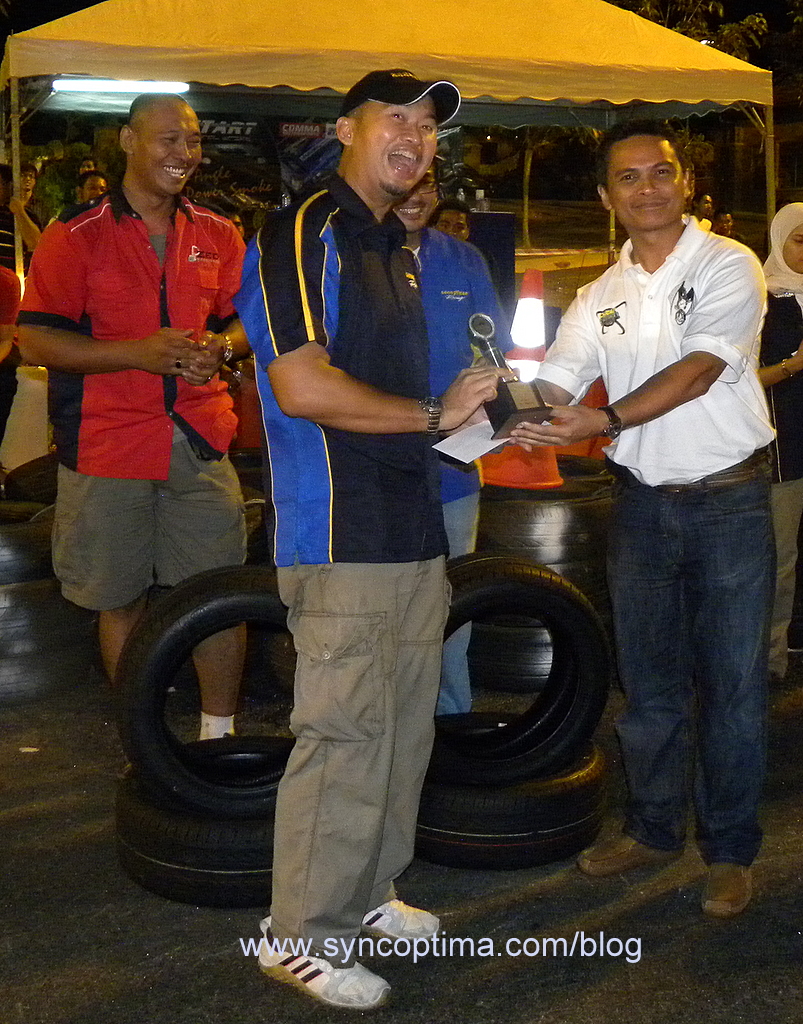 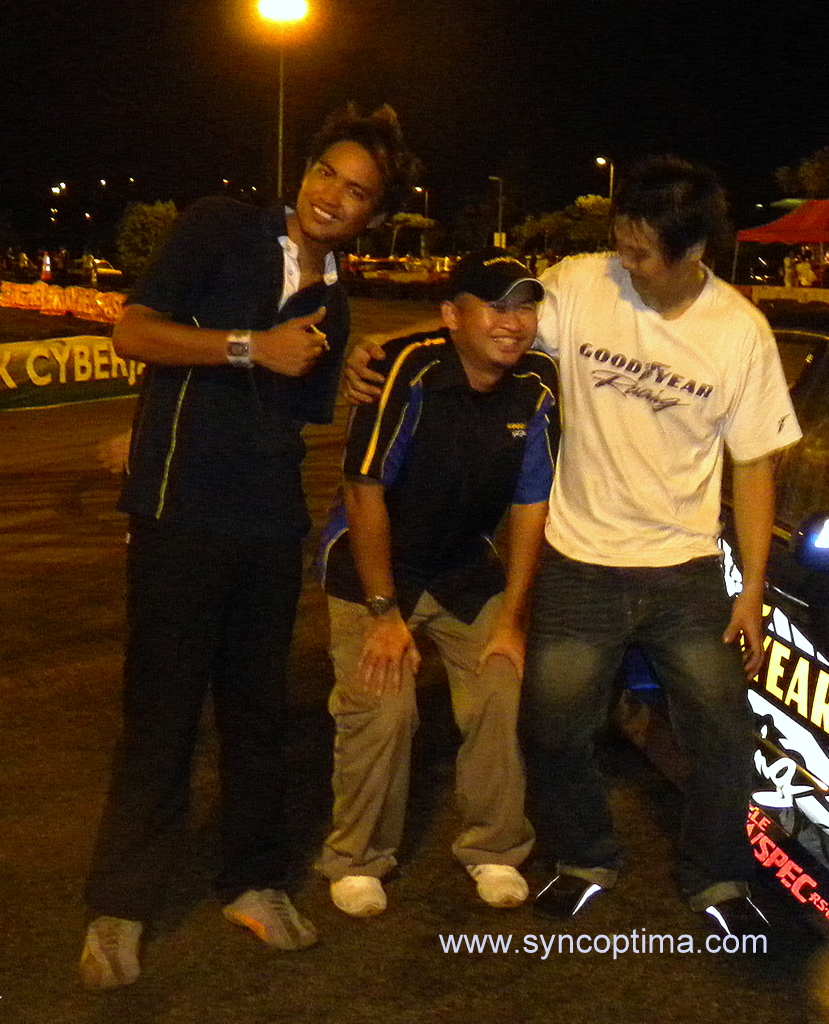 I can’t remember what I was doing here but I suppose this is a good picture to end my posting.. 🙂