To spice up the fasting month, a competition called ‘Ramadan Drift Challenge ‘ was held on the 21 August 2010 at the MAEPS Motosport Park.

Having just done a turbo conversion on my supercharged AE86, I thought it was the perfect opportunity to test out the car. Jane was not able to participate as her car was going through some major mods ( watch out guys!!!) 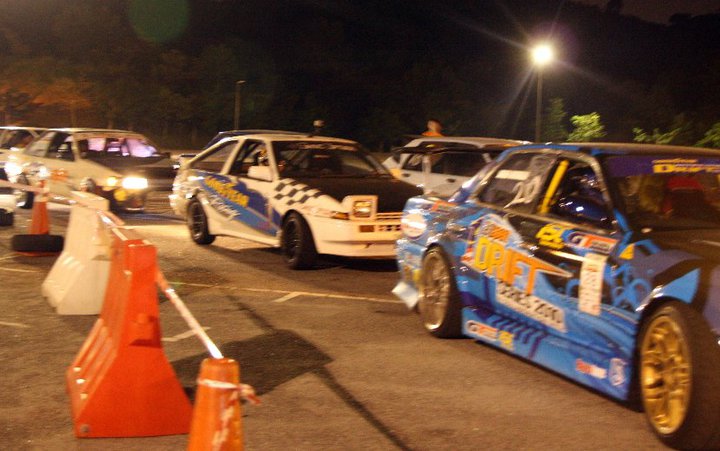 However in her place, we had a Filipino student named Norman Agojo , who was driving our No:4 AE86 in the competition. Norman is a student of ours who had flown over just to attend our drift clinic held earlier that day. Considering this is the first time he is driving a right hand drive car , he did pretty well by scoring points during qualifying! 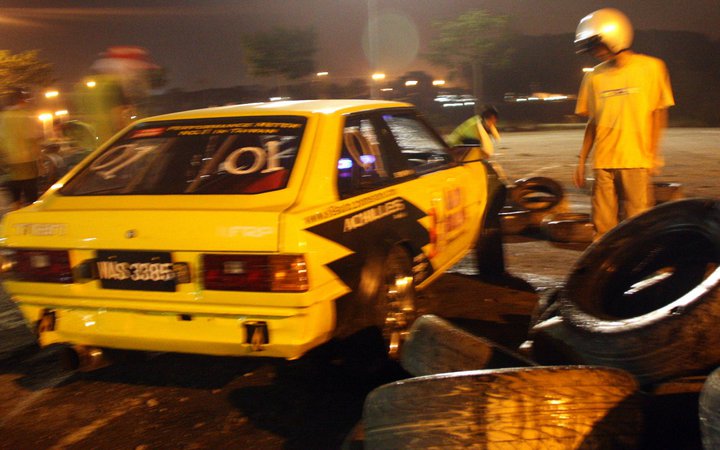 Utilizing the current Saturday Night Drift layout, this competition had its fair share of thrills and spills which basically shows  the technicality of the new lay out!

Qualifying was no exception , the amount of spectacular crashes that night   showed the sheer determination of the participants!

The turbo conversion, though did not contribute much in power hike, proved to be extremely reliable; no dramas of belts splitting or being thrown out. However, due to the rigours wear and tear of drifting, my gearbox was showing signs of giving way. Engaging into third before initiation was a matter of hit or miss . This had me gingerly threading on 2nd before getting into third in order to make shifting easier!

Qualifying  was straight foward for me but  a few sandy patches on the track, which resulted from cars crashing prior to my run, had me understeering a little thus giving a third placing  in  overall qualifications. 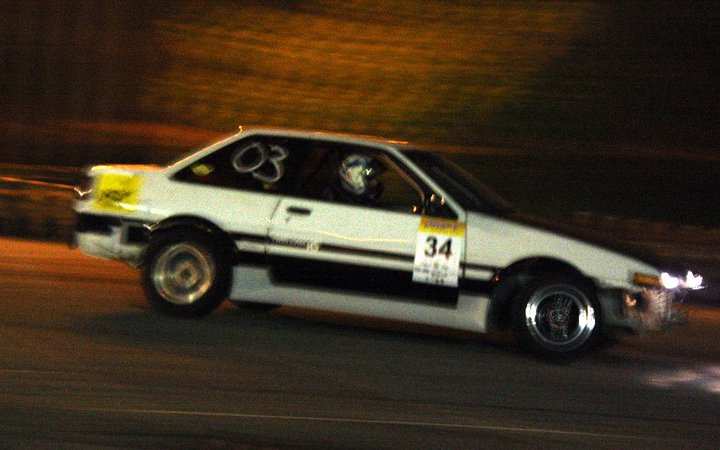 For the first round of tsuiso battle, I had to go against Misnadi of Feinto D. He and his sc14 supercharged AE86 was in perfect form during practice. It is no suprise as this was his home ground along with other Feinto D drifters! .During our first run, with me leading, Misnadi had somehow taken the inside line which caused him to spin upon entry!. Upon seeing this I continued drifting a ‘safer line’ to the finish. While trailing the gearbox gremlin struck causing  a huge gap between us, before initiation. Yes it is wiser to leave a gap since I had the advantage but this gap was huge!! More like 6 cars lengths. Thankfully I was able to bridge the gap by the time we reached the front clipping point!.. 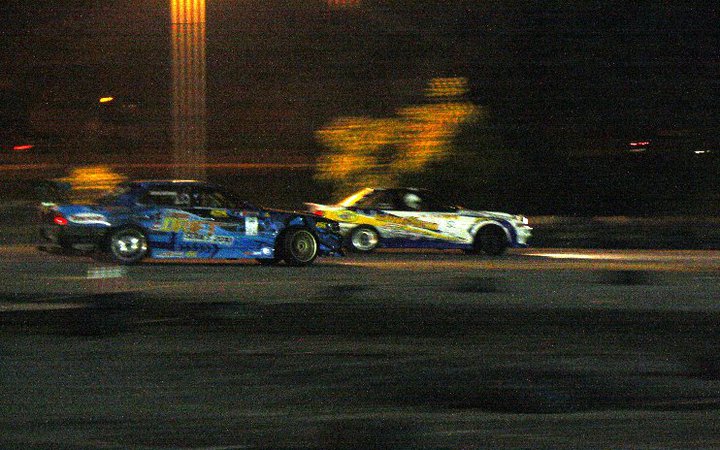 Though we had tsuiso countless of times during drift sessions, this would be the first time I had to go against Johan Norman during a competition. Driving our old C33, Johan looked like one of the top contenders of the competition . His massive entry speed was something I had to look out for. With my wonky gearbox, I knew I was faced with a daunting task of beating him. During the first couple of runs I am unsure of what had happen as my spotter of the day ,Jane ,had to go to the ladies room…All I know was a One More Time was called!  The 2nd run had Johan sticking to me like glue during initiation but he made the mistake of taking the inner line thus causing him to straighten a number of times. During my turn to follow , a gap was developed as he left me at the straights ( whats new?:P) but I  managed to narrow it before the finish. 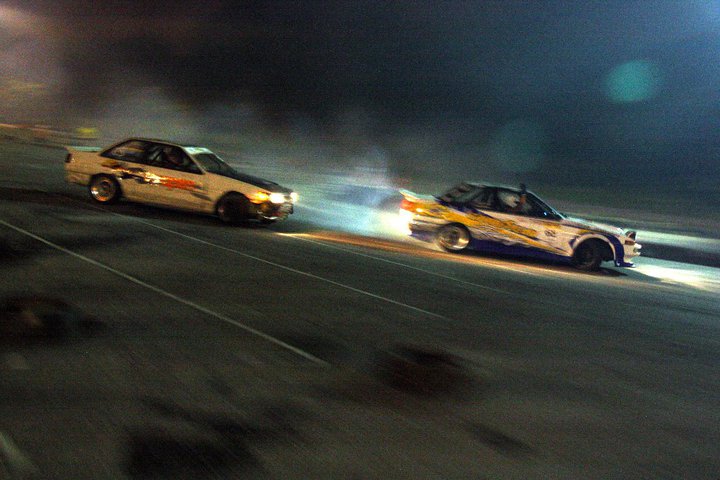 Nazam’s ca18det powered AE86 was killing it that night. His precise and smokey drifts had  earned him a 2nd placing in qualifying. This had me trailing him for the first run of our battle! Keeping as close as I could during  the straighst , I managed to shadow his drifts at a reasonable distance while maintaining the correct line. However while leading I caught a glimpse of him taking the inner line to the rear clipping zone !At that moment,  I knew that I was into the finals. Infact I was celebrating while drifting to the finish ..hehehee 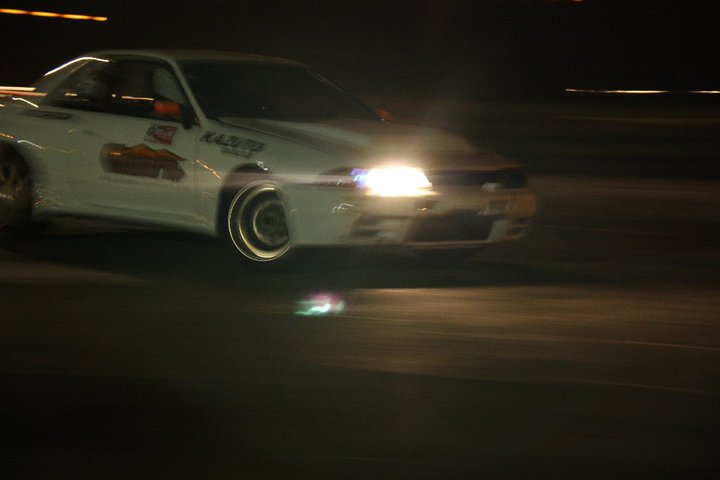 Yoong had actually jokingly said to me about seeing me in the finals if I don’t screw up and that was where we both ended up. I knew that I was no match to  the pace of his V8 Skyline just hoped for the best. With me leading for the first run, Yoong had left me a gap before launching his v8 into my rear .Narrowly avoiding contact, his car spun soon after. With that I made a safe 2nd run which  sealed me the win!!! 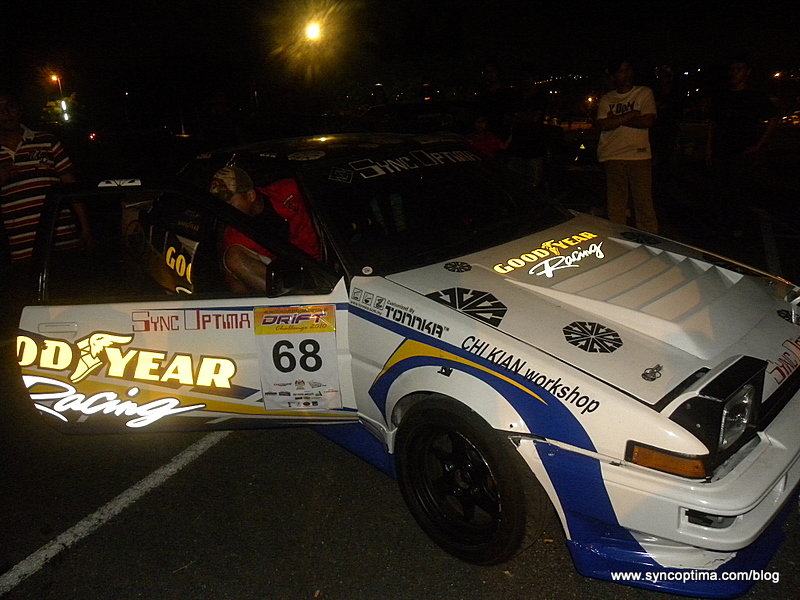 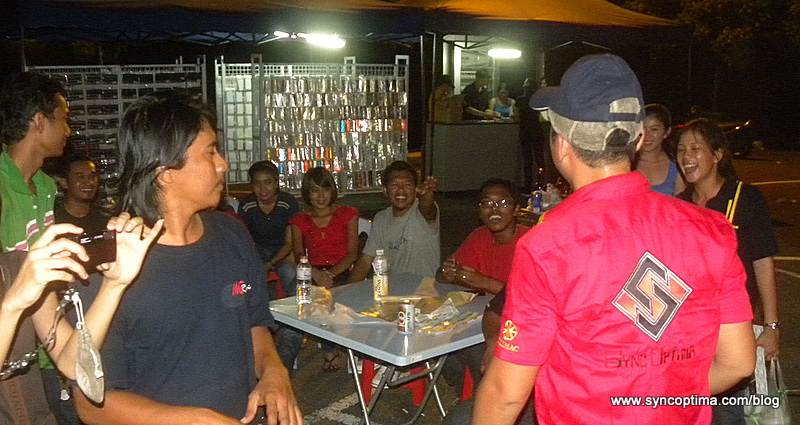 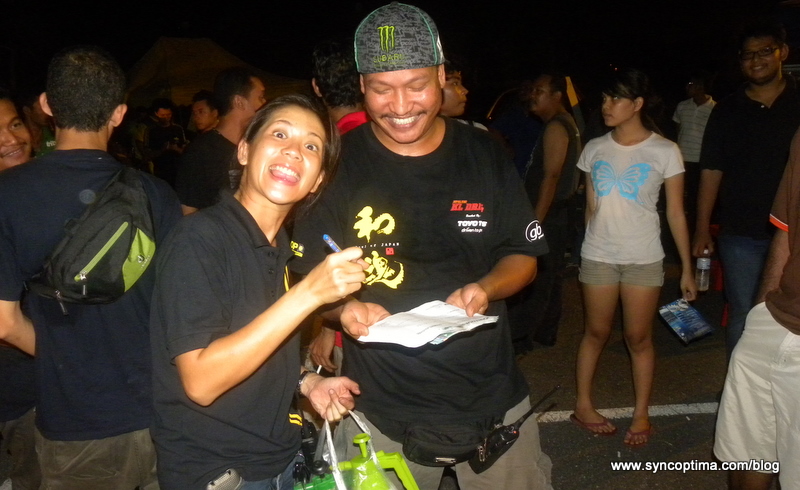 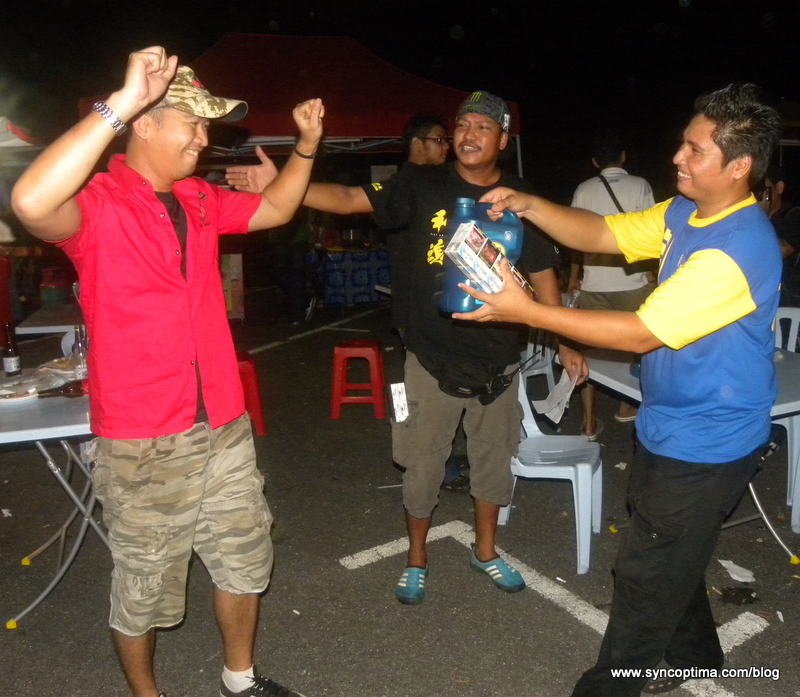 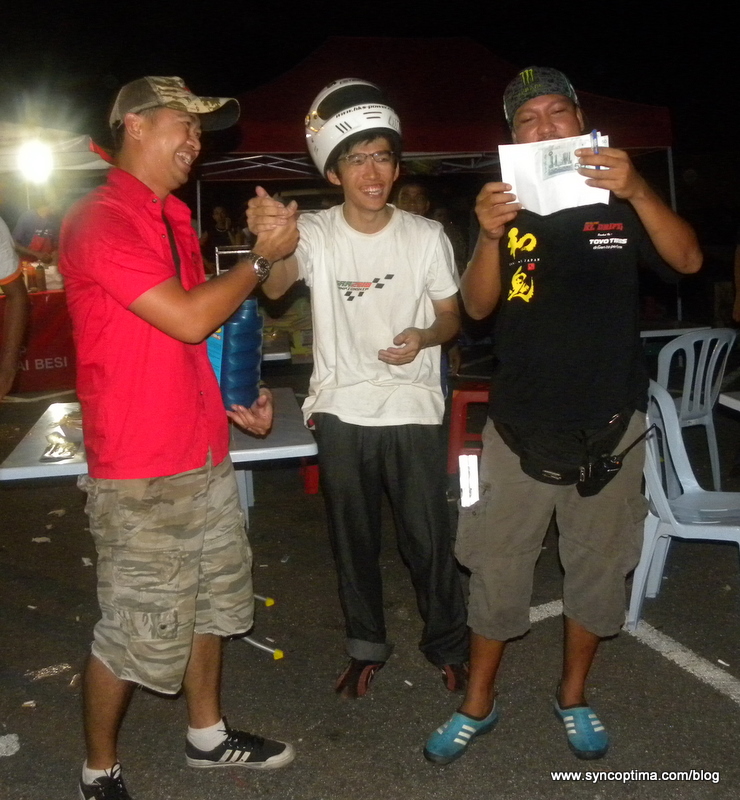 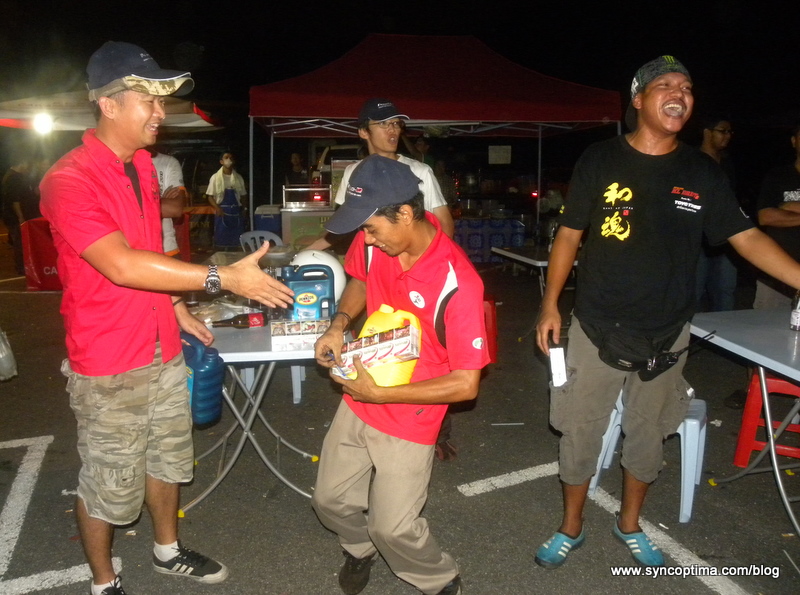 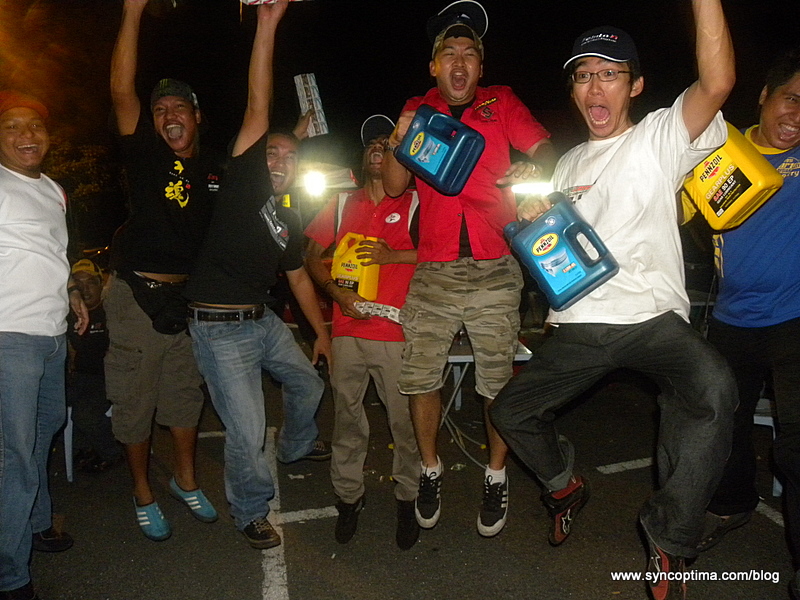