With my S13 still in the panel beaters after my major screw up in Formula Drift Malaysia, Jane and I decided to take part in the inaugural ACE Drift Challenge in Jebat stadium in Malacca. ACE is a company that specializes in suspension and undercarriage components for drift cars here in Malaysia. They are quiet popular amongst the AE86 and KE70s crowd as they are known to make top notch robust absorbers that could withstand all the abuse drifting could offer 🙂 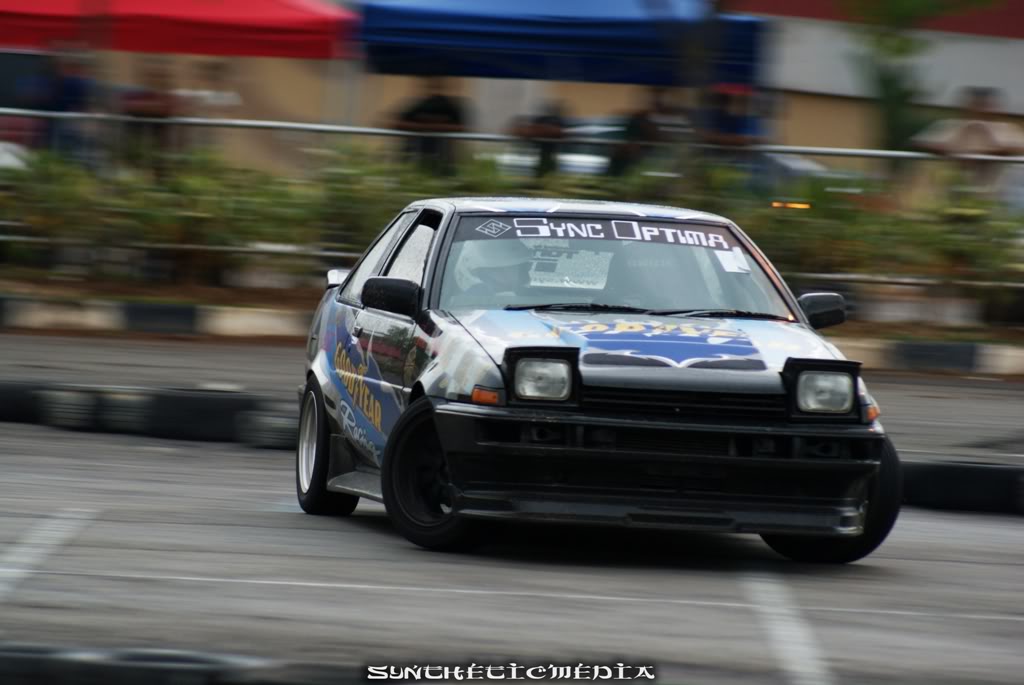 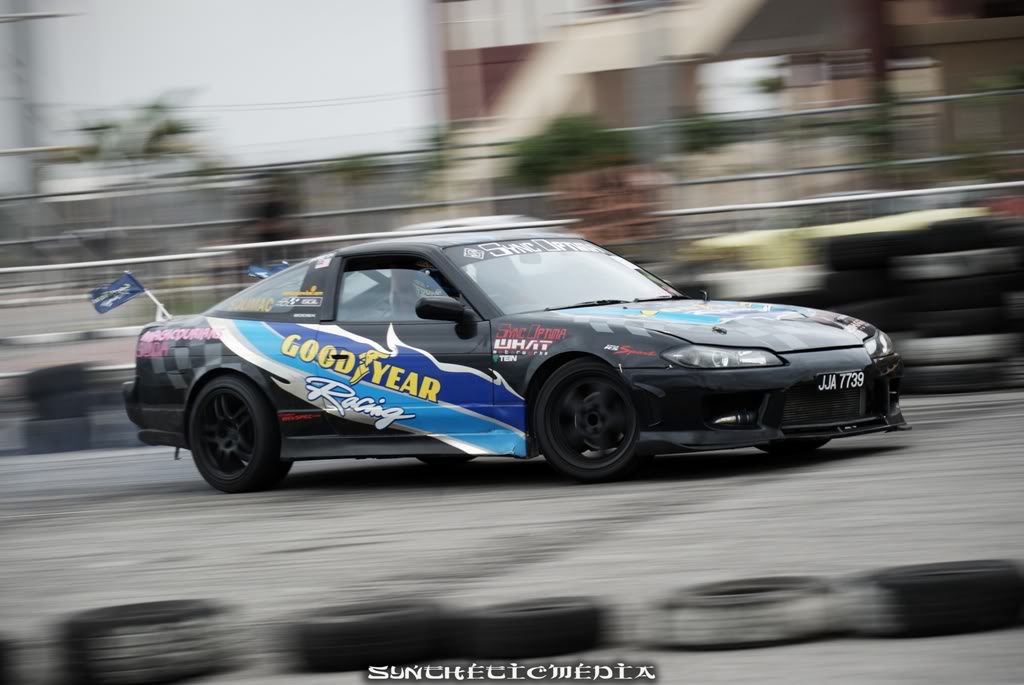 The course that was set by sole judge, Ah Keat, was the usual ‘R’ Shape with a single rear clipping zone and two front clipping points. What made it different was the line that he wanted us to take; Entering in third gear, we were required to take a angular line towards the rear clipping zone!! To be honest, I was a bit confused about what the judge wanted when my run where I  clipped the rear zone (knocking a cone off) and nailing the two front clipping points only earned me an 9th qualifying placing . Unfortunately Jane’s runs , which I thought were good, wasn’t good enough to make it to the top 16. 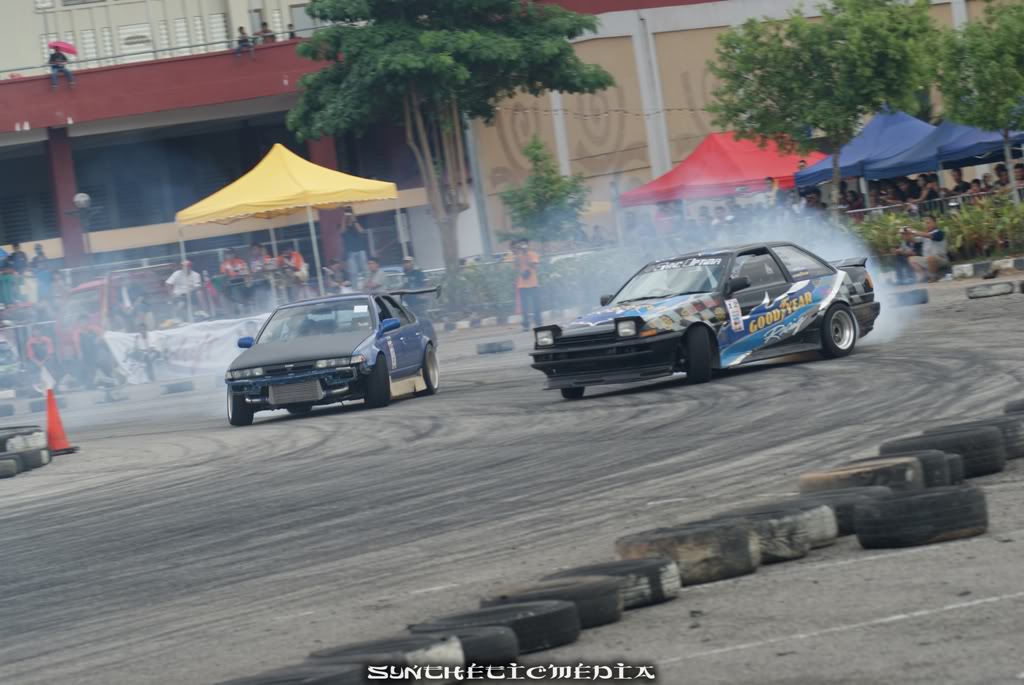 My first tsuiso run was against Rocker Loh ,in a borrowed Cefiro. I had managed to follow closely the RB25 powered car while trialing  and managed to distance myself  while leading . With that I got through the best eight. 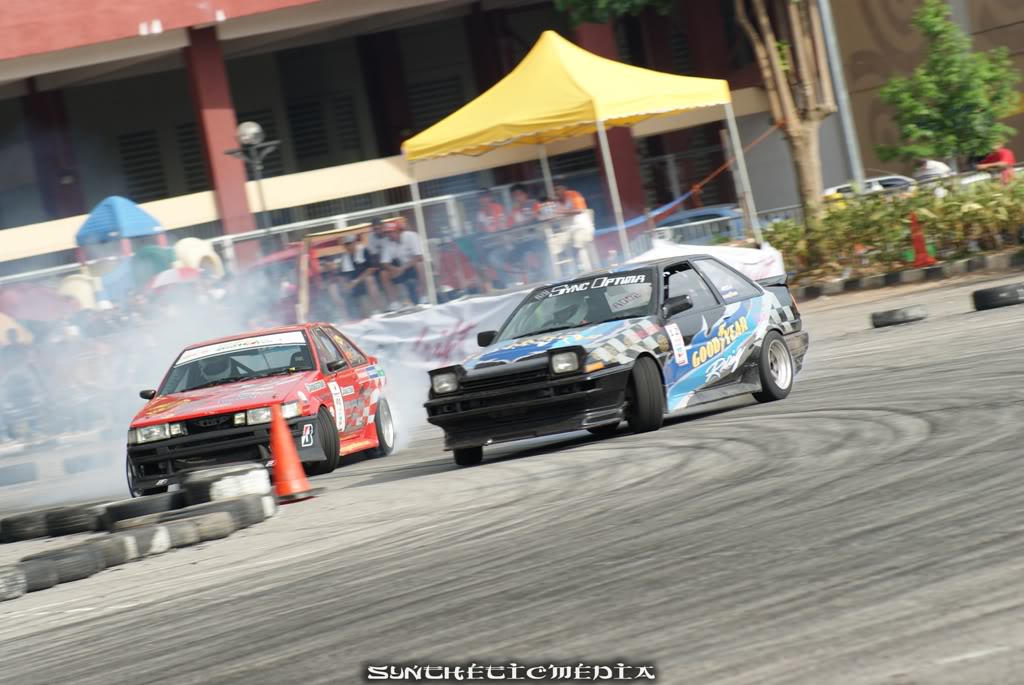 My next opponent was top qualifier Tan Tat Wei. My AE86 was no match to his high powered hatchi  but unfortunately he made a fatal mistake of following too closely on this tight course which ended in him rear ending me  during the switch over and straightening in the process. With that, I’m in the top 4!! 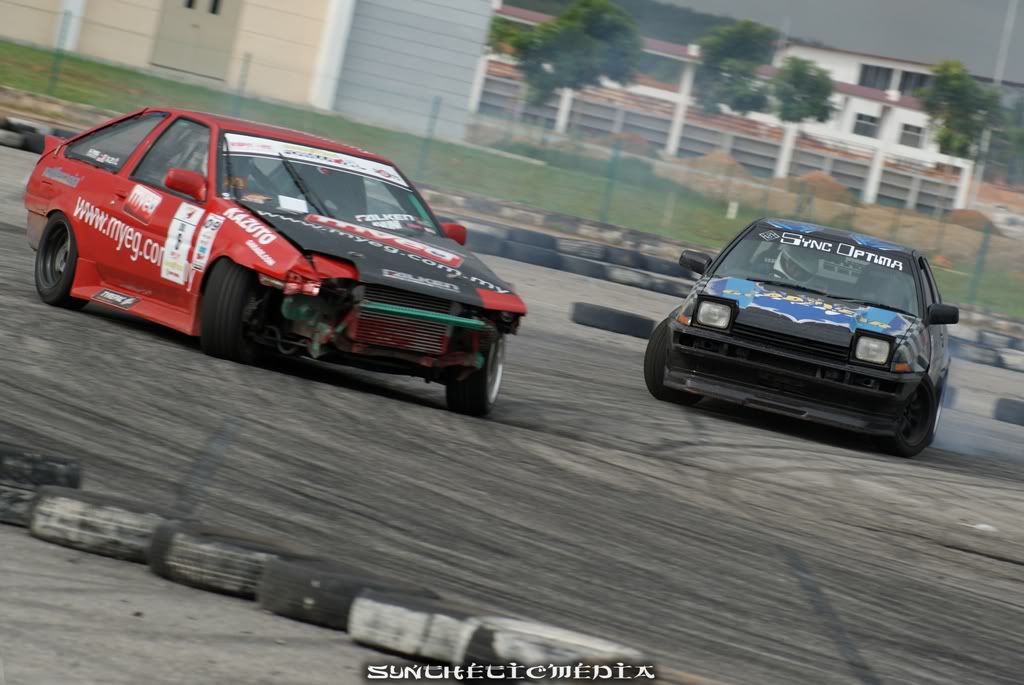 Top 4 was against me an Zulfikar. Zul was still struggling to get in grips in his newly transplanted SR20 turboed trueno.  An uncharacteristic spin by Zul and  strong chase run by me ,allowed me advance to the finals. 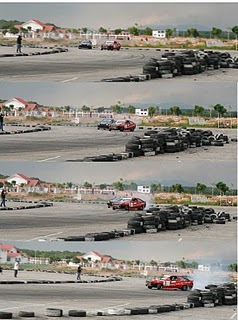 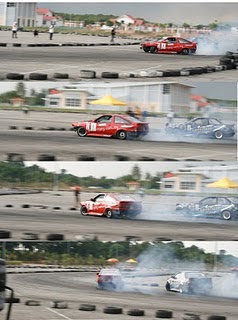 The finals was me against Derrick Lim. At this point, with the total of six tsusio runs I had,  along with the two qualifying runs I was still using the same pair of Goodyear Duraplus tires at the rear.   Jane was getting a bit worried if they would last the next couple of runs but after thoroughly inspecting them, we were amazed that they were  good enough to go for another dozen of runs!! Most importantly, the grip level stayed consistent throughout. I believe this gave me the advantage against Derrick as  I was alot quicker than him during our runs even when I was short of more than 50 horses against his car!!

In the end of the video  by eddie88  (www.zakumalaya.com) below , shows the final tandem battle of me against Derrick !

After a disastrous Formula Drift Malaysia last December, it was good to be on the podium again . 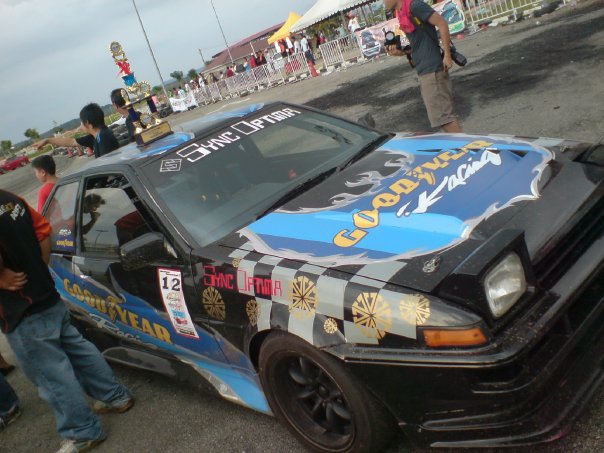 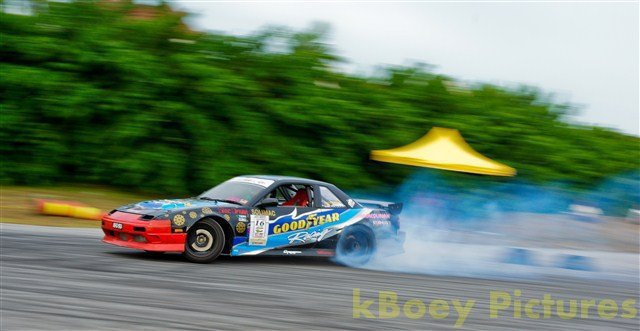 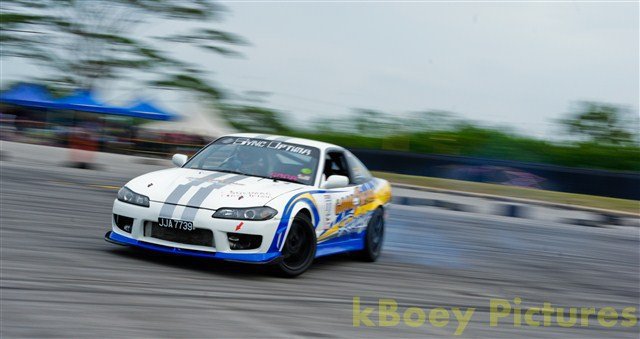 Five months had past  when my S13 is finally ready. With a hefty  power up grade and a newly acquired control arms and knuckles, the round 2 of the ACE Dift Challenge seem like the perfect opportunity  to test out the car before Formula Drift Singapore 2010, scheduled  was 2 weeks later. However, things didnt go as smoothly a planned with an untimely  failed LSD and a misaligned knuckle kit that would either cause me to straighten or spin at any given moment.I had barely scraped through qualifying with an 8th placing but got knocked out early by Hong when the s13 veered off course during my lead.

Videos by Nash from Singapore

Jane wasn’t spared either as she had suddenly developed  misfiring  issues right during  qualifying! 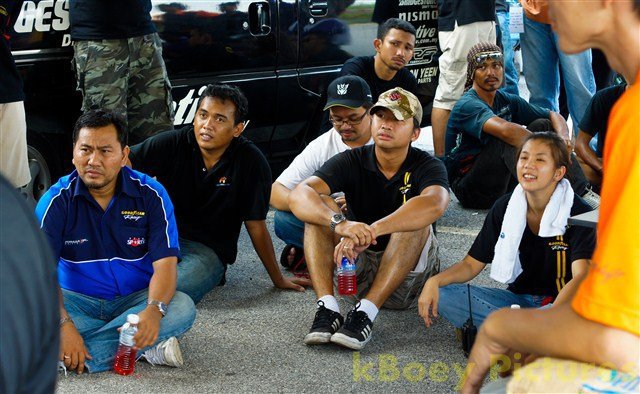 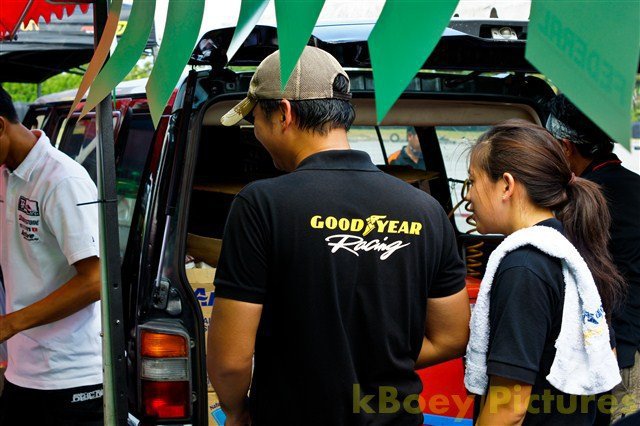 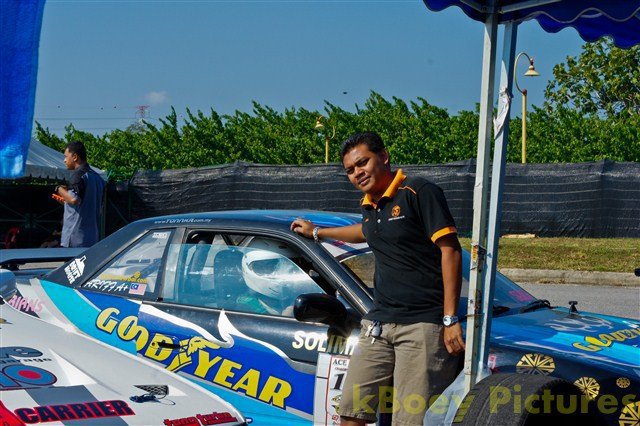 We were glad that we were able to identify the problem and have two weeks to rectify them!

With our maid having to go for surgery. We had Johanna with us for this round of competition. I was a bit worried as the environment at Afamosa isnt what I would call ideal for a two year old   . So Jane and I had  took turns looking after her while one of us would go out for practice. It helped also, that  Yoong and Swee Kin had brought along their daughter Sze Yun to Malacca too. Swee kin had the daunting task of  looking after both of them when we both were out during practice!! Thanks Swee Kin!! 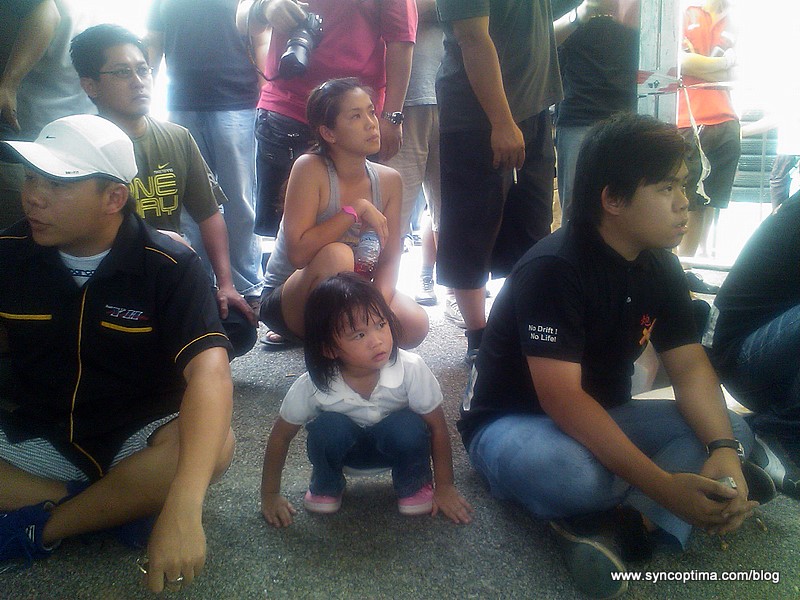 We had taken baby steps to develop the handling department of the S13 since it debut in April and we are glad to say that we are almost there. Our experience during round 2 of FX Open ( report will be done later) had exposed the car’s weakness of its intitial set up.The car handles alot better after making a few adjustments and  we reckon we are able to make it even more faster.

I managed to qualify 3rd with two strong runs with Jane making into the top 32 with a 28th placing!!

Having to take care of Johanna and also not having (our photo/videographer,caretaker and friend) Kevin Boey around results in having no drifting photos of the event!! My apologies..

I had to go against another Sultan Sulaiman team member, Popeye (i swear, thats his name) . During my lead, Popeye had taken the inner line while I was clipping the rear clipping zone thus forcing him to brake and straighten when I dove into the front clipping point. During my trailing run, I followed him as closely as possible and manage to advance to the Top 8

In this round, I had to go against Oliy of Feinto D. Oliy and I have gone against each other before and we are both not shy about exchanging some paintwork (report of Cyberjaya competition  later). However it was unfortunate that his NOS powered supercharged AE86 was low on NOS which result in me gaining a huge gap during my turn to lead and him straightening during initiation when I was trailing. I’m into the TOP 4

This is the second time I have to go against Tan tat Wei. But this time Tan is packing even more power with a 300bhp++ Nos powered rotary AE86!! Not wanting to take any chances I opt of have a tire change. So I picked up my crew from the starting line and off we went to our pit. This is where things got a bit weird; somewhere during the time my tires were being changed, the NOS switch on my car was switched off. I was in the car the whole time and my crew reckoned that I did it. I strongly doubt it as during my experience of FD Malaysia, I made it a point to never touch it !. Somehow i suspected that my crew had accidentally knocked it off while trying to get out of the cramped caged car. Anyway, I not pissed or anything but I just found it weird. So as you might have guessed, my run with Tan was a disaster. He qualified 1st , so he was first to  lead. The starting point is extremely sandy so I am forced to drive half throttle throughout the 1st gear and floor it mid into 2nd. Usually the car would response with a sudden surge of power. However this time nothing happen!! I saw Tan gained 4 cars length infront of me and I knew there was no way of catching him.Upon returning to the starting grid ,only had I realised that the switch was off. With my over zealousness of wanting to gain a gap during my turn to lead, I had entered the rear zone a bit too hot causing me to hit the rear barriers but not losing drift! However this slowed me down tremendously thus allowing Tan to stick close to me!! So that puts an end to my day in this competition

With that I was awarded a third placing and inturn making currently in 1st spot in the overall standing!! With one more round to go, I hope my luck improves for me to win the title..wish me luck 😉 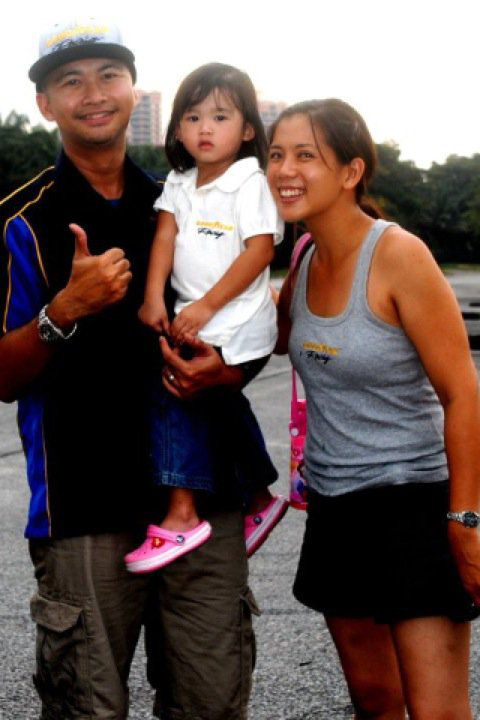 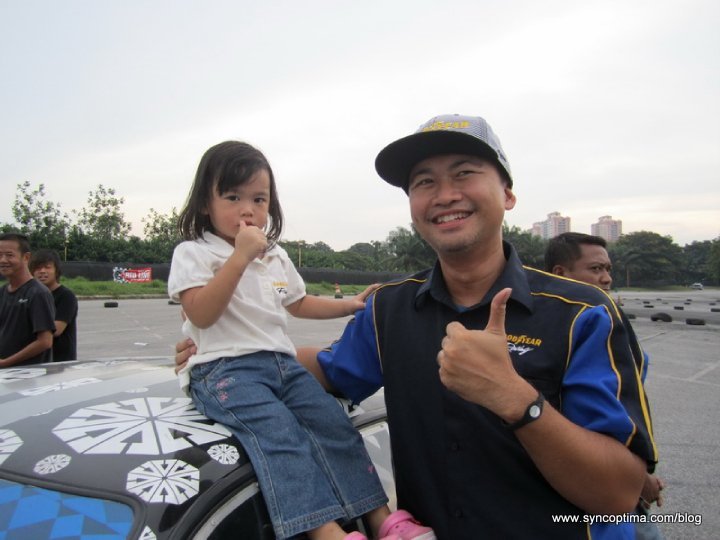 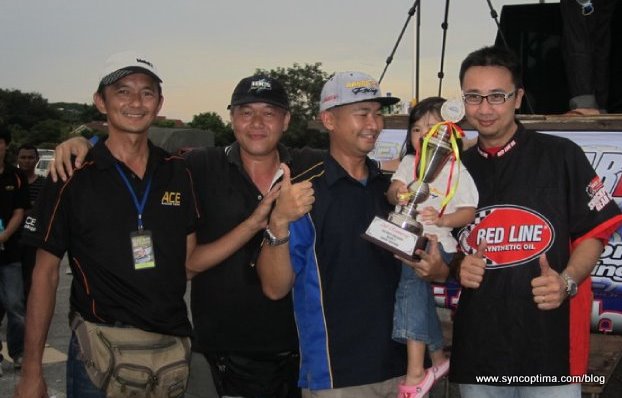