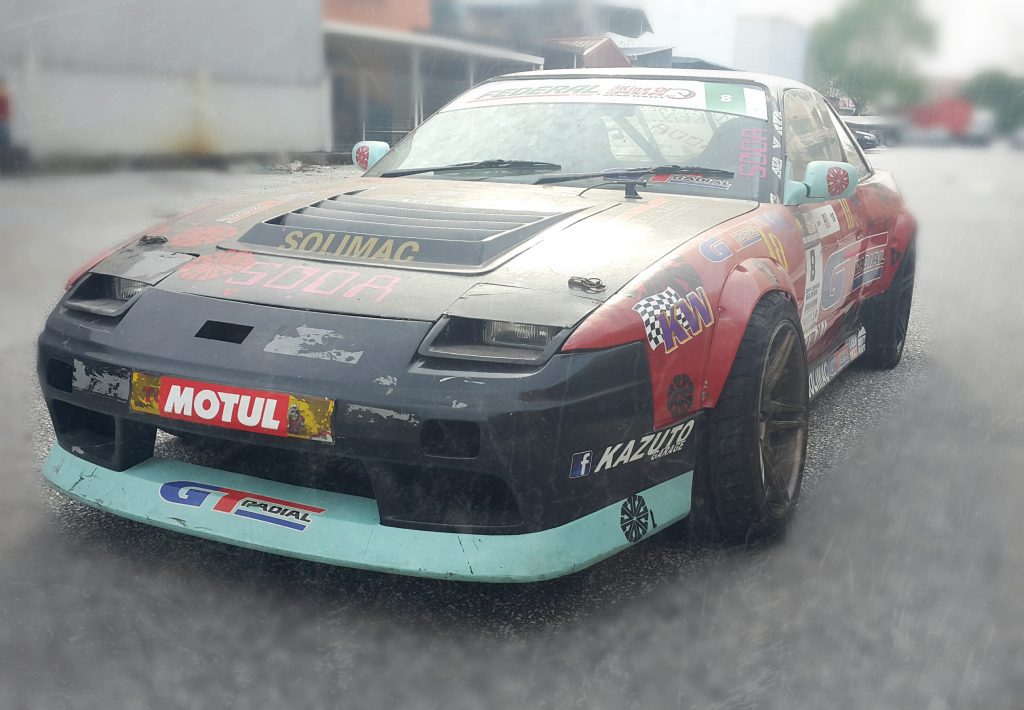 I’ve had her for over 11 years now n she had gone through many incarnations to what we here. I have taken a 2 year hiatus in competitive drifting n she has been under the covers ever since.

A drive (drift) around the block was all it took to convince me that I won’t be changing a thing about her…then again the Nitrous system will have to go to accommodate the new rulings in drifting!

It is  apparent that I have not kept to my promise of being more regular with this blog but there’s always this year..Anyway, due to our extremely busy work commitment , Jane and I were only able to join a handful of events but we are glad to say that we have been fairly successful in representing  our sponsors in particular GT Radial Tyres through their distributors sole here in Malaysia , Heap Joo.

Held at Elite Speedway, I was placed in the open class turbo category and had a ball ripping through the course in my road s13. Eventually all good and fun things have to come to an end and I placed 2nd in my category!

Round 4 was fairly important round in this championship for me as this was supposed to be the perfect opportunity for me to narrow the gap with the Bullzai who was currently at 1st place. A higher placing than him will allow me the lead or at least an easier fight on the 5th round to be champion. With the newly equipped  GT Radial  Champiro Sx2 , the car felt fast and was perfect and practice went well . Unfortunately during my very last lap of practice , while following a competitor, I had crashed into him when he hit the wall . This caused my front knuckle and tie rod to bend and damaged the front rim during the impact. We managed to change the rod but weren’t able to get the alignment done in time hence having the car wanting to veer to the left and had to qualify in that condition.

During the 1st lap of qualifying , I lost 3rd gear when the gear broke in mid drift. I was about to abort the 2nd run when I decided to just do it in 2nd gear. Thankfully I did decent and managed to qualify 2nd position

Jane did  well in qualifying and managed to get into the top 16 position. Unfortunately  was knocked out early in the best 16 tandem and hence placing 16th in round 4

Tandem went by without much drama and it appear that drifting in 2nd gear with a 4.7 final drive wasn’t much of a problem as I was keeping a close watch of my rev and making sure to feather the throttle as much as I could while drifting. However during the semi finals against Mervyn Mohd , after having a huge lead while leading , Mervyn had crashed into the tire barriers leaving me no room to go but into him. This caused my rear knuckle, suspension, subframe and rims to damage, rendering my car useless to fight the finals.I was extremely disappointed being unable to go against Bullzai in the finals as a win would put me in a better placing for the championship , alas  I was awarded 2nd place and that was how it was.

Having a free weekend and wanting a refreshing break from drifting ,I decided to join the Malaysia Super Lap Battle held at Elite Speedway. I brought my trusty road S13 for this event, equipped with 245/40/17 GT Radial SX2 on all corners and was placed in the Category 5 class which is for turbo charged full interiored street cars. This category was fiercely contested with me only able to inching into first place at the very last run. Good fun with really good tires , I would say!

The massive crash I had on round 4 had me with running on new front  and rear knuckles. These knuckles are fairly new in the market and needed to be tweaked further which was the agreement I had with the manufacturer as I was to be developed them with my inputs and suggestions. Due to the  unavailability of drift areas and the  temporary closure of Speed City KL, I was unable to test them prior the event and were only able to use them during the final. All I could say was it didn’t really suit my style of drifting and it certainly showed during the whole of his event. Glad to say we have tweaked the  knuckle’s dimensions making them perfect.

Round 5 was also the time when I had the opportunity to test out the GT Radial SX2. Since there were a bunch of left over SX2’s , from 60% to 80% tread left. I thought it would be the perfect opportunity to test these tires out in a competition setting.

The heavens opened during qualifying and proved to be fairly tricky to a lot of drifters. The SX2 tyres performed flawlessly on the wet track earning me 2nd position during qualifying. Jane did just as well with a 4th placing qualify result. She had nailed the course perfectly tackling all the points and zones!

Tandem is something she would have to work on as she had to bow out during her best 8 battle against Mervyn.

The impressive thing about the GT Radial SX2 tyres is that the compound used makes the tyres still grippy even as much as 60% thread wear. This makes these tyres stand out against all the other tyres in the market now. However, due to the lack of thread, water dispersion was an issue when there is standing water . During the early part of the tandem battle when the track surface were evenly wet , I had no problem adapting with this issue but during my top 8 battle when there were uneven patches of water on the the drying track, I was met with sudden under steering or over steering whenever I go over them. I struggled throughout and barely beat Bullzai in the top 8 round.  However, I had to succumb to Wan Jo during the top 4 battle as I was all over the place during our fight. I managed to win the 3rd place tandem but  it was not enough for me to improve my overall position and had to be content with my 2nd place overall standing.

Due to the clashing of dates and our work commitments, Jane and I were unable to join any of the KBS Drift event  except for the finals which was held at the Speed City. Having sorted the cars handling and given fresh pairs of GT Radial SX2 tyres to compete with,I felt good going into this event.

I managed to qualify 3rd with Jane getting 9th position. Tandem was a straightforward affair but during the top 4 battle I did a silly mistake and spinning while trailing Mah Lao during our battle, This is the classic case of ;no one’s fault but mine. Mah Lao is a student and a good friend of mine and losing to him has allowed him to not allow me to hear the last of it! 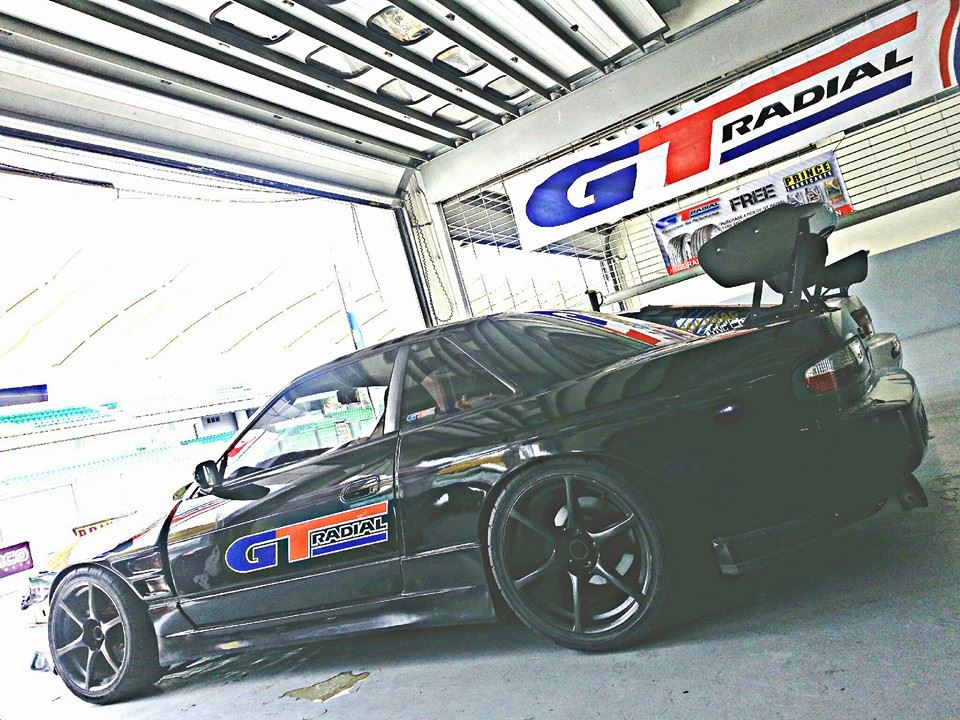 Zerotohundred time attack competition  is one of the most talked about timed race event in Malaysia. With competitors from Singapore, Thailand and Indonesia, this highly anticipated would be a great way to showcase the GT Radial Champiro SX2 tyres. With the success of the SX2 tires during another time attack event called MegaLap, having podiums on literately ever category, the same would be expected from us in this event

I had 265/35/18 sized SX2 on all four corners on my road going S13 for this event, which surprisingly had no tyre clearance issues .Being a full interiored street car , I was placed in the Street Turbo class . 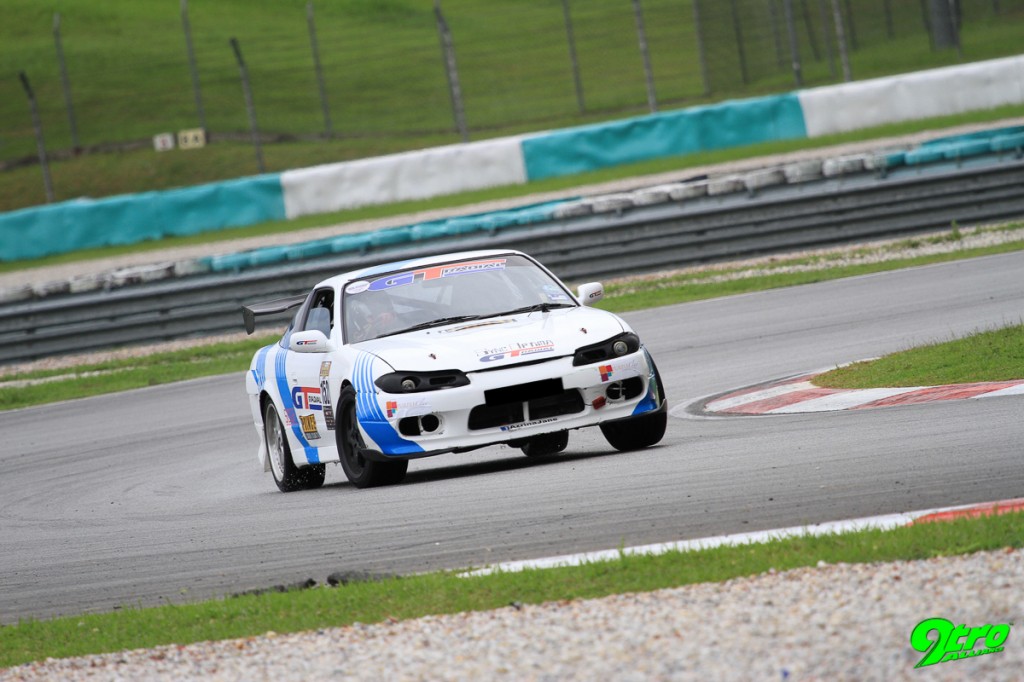 Jane with her drift setup 180sx was running 235/45/17 fronts and 245/40/17 rears for this event was placed in the Time Attack Machine category due to her stripped n caged car. 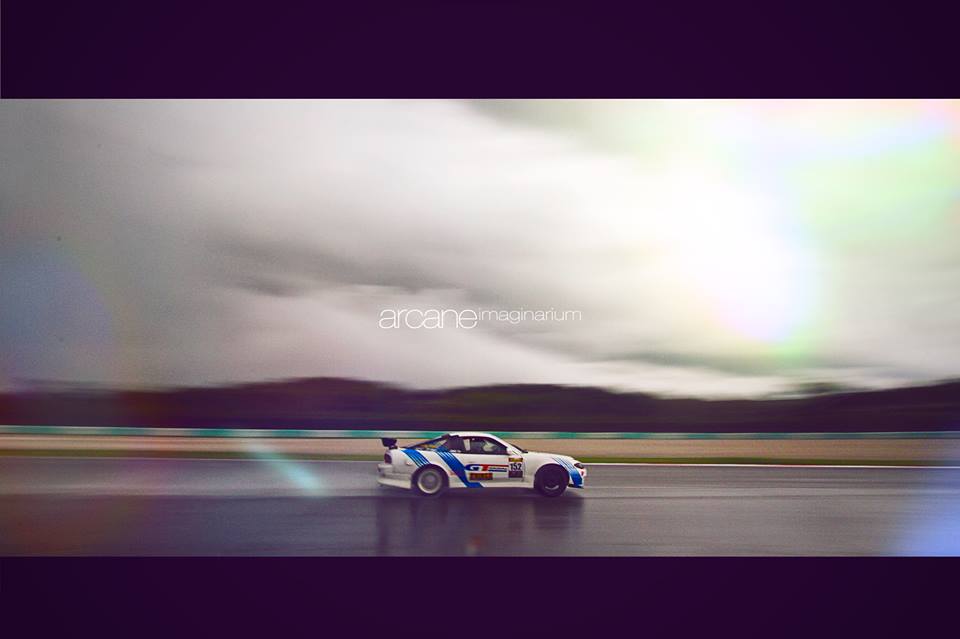 It rained heavily prior to our run basically rendered our times fairly useless on the slipperly wet surface. However I was developing huge power drop as the turbo manifold had begun to leak. This was apparent by flashes of back fire flames not only from behind the exhaust pipe but also flames coming out from beneath the car engine bay! Being slippery, the lack of power didn’t effect me too much but when the track dried up during our second timed section on top of the worsening leak of the manifold, I had truly suffer from this. On my first hot lap , I was held behind by traffic but on my 2nd lap I had a clear run to get my best time. Unfortunately the manifold gave way at turn 7 forcing me to run without any turbo boost for the rest of the 8 turns. Ironically that run was my fastest allowing me to be placed 3rd fastest in my category!! Jane did fairly well with a 4th placing in her class too. 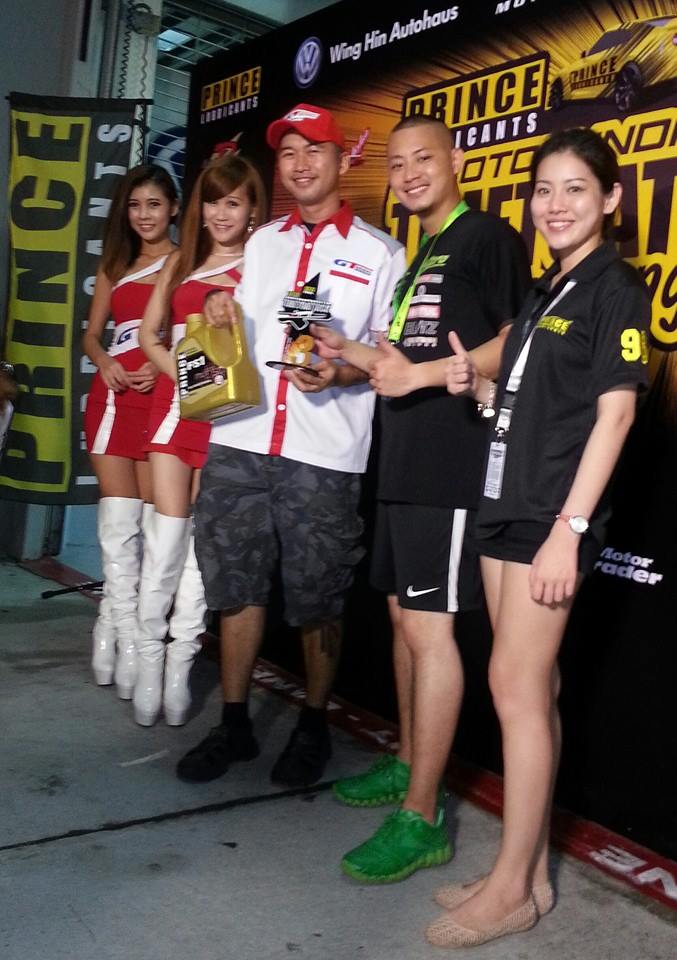 All in all it has been a good year for Jane and I. Being absent from competitive drifting back in 2012 , it is good to be competing again. This year also sees me getting back into time attack events which I hope to eventually lead me back into circuit racing. Thank you for everyone who had supported us through 2013. These results all belongs to you!