The Jabatan Belia dan Sukan WP Drift Challenge was a one day event where official practice would start at 4pm and the competition would continue  right through the wee hours of the morning! I have been having issues with the AE86 supercharger, with belts splitting and coming off and such. To make matter worse, the extra rear brake caliper was having the tendency to lock up on its own…oh well.

Jane and I were there by noon to   check on the cars and found that I had roughly about 10 runs before having to replace the damaged  charger belt to a brand new one. So with a bunch of belts in store we went on to the official practice later that day. 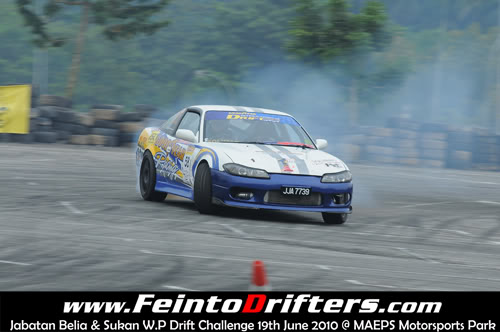 All photos are from www.feintodrifters.com

The thing about belts spliting and fraying is, they tend to loose grip and causes the pulley to slip. When this happens you will begin to experience low boost level or at worse no boost at all. So usually when I feel there a drop of power , I’d know its time to change the belt!

Practice went smoothly with me practicing tandem with Jane mostly throughout the day. Practicing with someone you trust allows you to go all out during entry and with Jane I was able to do that! 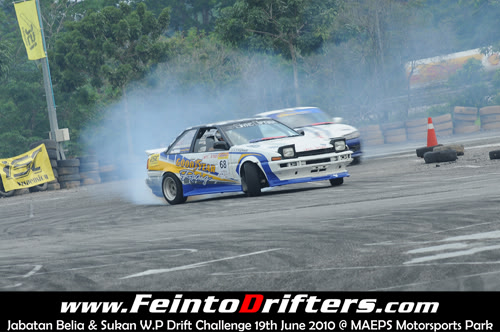 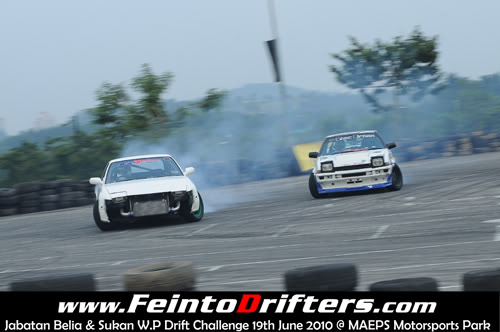 Qualifying was held at 8pm and was a straight forward affair without any dramas.I had qualified 4th while Jane qualified 13th! So luck has it that it’s going to  be a husband and wife tandem battle. This is the 2nd time that this has happen to us with the first being almost 4 years ago in MITC malacca!!!

During my lead Jane had trouble to keep up with my pace and had given me the advantage in the process. During trailing, I had followed her closely but she had dove into the inside line at the front clipping zone causing me to lock up and straightening to avoid hitting  her, However her extreme move to the inside cause her to take down a couple of cones down in the process. This was spotted by the judges and was seen as an ‘off course’ thus the win was awarded to me..whew!! I was sweating bullets while waiting for the result  😛

My next opponent was Nono with his 180sx. I was able to pull a slight gap during initiation but suddenly there was a huge loss of power!!. I managed to scrape through by clutch kicking all the way to the finish line! We rushed to the pit to find that the charger belt was totally gone. Given only 5 minutes to fix stuff, my mechanic . Kian had decided to remove the alternator belt to make installing the charger belt easier. So I was force to run the next run solely on battery power only.

When trailing , I was able to follow Nono closely and the win was given to me!.

Next was Ah Ngah from Feinto D. Driving an almost similar set up AE86 I knew that I will have a hard time round! However during my lead , Ah Ngah had straighten briefly when drifting close  to the rear clipping zone thus sealing my win to advance to the finals.

For the two top spots I had to go against Wan Boss. Being a higher qualifier than me,  he led during the first run. I was slightly shallower during entry but was very close to him through out the course. During my turn to lead, we both had similar entry angle but I had managed to distance myself from him. However this wasn’t good enough for the judges for a ‘One More Time’ and the win was given to Wan Boss!

Kudos to the organisers .We certainly had a great time and would be back for more!! 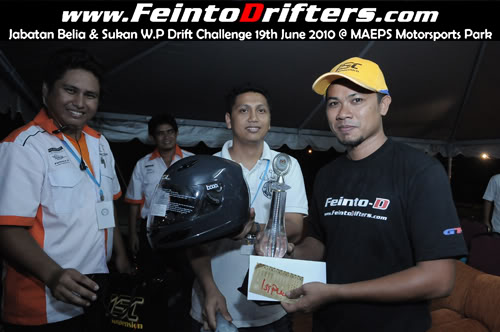 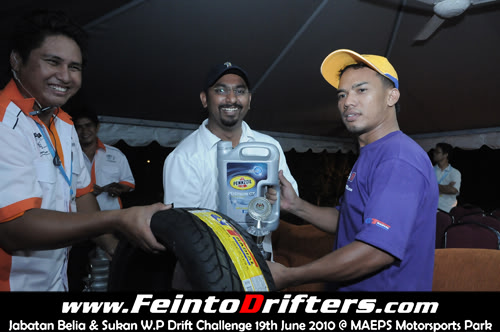 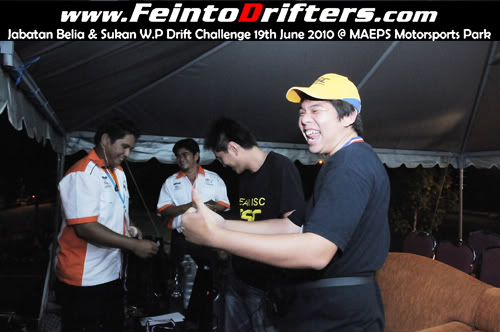